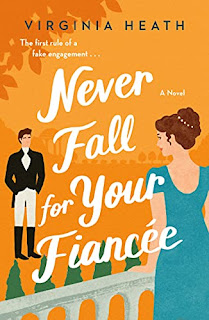 The first in a new historical rom-com series, a handsome earl hires a fake fiancée to keep his matchmaking mother at bay, but hilarity ensues when love threatens to complicate everything.The last thing Hugh Standish, Earl of Fareham, ever wants is a wife. Unfortunately for him, his mother is determined to find him one, even from across the other side of the ocean. So Hugh invents a fake fiancée to keep his mother’s matchmaking ways at bay. But when Hugh learns his interfering mother is on a ship bound for England, he realizes his complicated, convoluted but convenient ruse is about to implode. Until he collides with a beautiful woman, who might just be the miracle he needs.Minerva Merriwell has had to struggle to support herself and her two younger sisters ever since their feckless father abandoned them. Work as a woodcut engraver is few and far between, and the Merriwell sisters are nearly penniless. So when Hugh asks Minerva to pose as his fiancée while his mother is visiting, she knows that while the scheme sounds ludicrous, the offer is too good to pass up.Once Minerva and her sisters arrive at Hugh's estate, of course nothing goes according to his meticulous plan. As hilarity and miscommunication ensue while everyone tries to keep their tangled stories straight, Hugh and Minerva’s fake engagement starts to turn into a real romance. But can they trust each other when their relationship started with a lie? The first book in the Merriwell Sisters series, Never Fall for Your Fiancée is a hilarious, sparkling historical romantic comedy from Virginia Heath.
PJ's Thoughts:
Never Fall for Your Fiancée is the book I didn't see coming from Virginia Heath and exactly the one I needed. I've enjoyed her historical romances with their adventure, depth of emotion, and well-developed characters. This newest novel has all three plus the added layer of impeccably-timed romantic comedy. I laughed and grinned my way through the entire book. It's so much fun.
Fake engagement is one of my favorite tropes and, boy howdy, do Minerva and Hugh find themselves in quite the romantic pickle with theirs. The twists and turns (not to mention their changing fictitious relationship details) keep them on their toes, especially when they have to deal with Hugh's mother's many attempts to trip them up which creates some hilarious scenes. That hilarity is well balanced, though, with a sweetly evolving emotional attachment between Hugh and Minerva. I really enjoyed these two together.
Hugh's best friend Giles, Minerva's sisters, and Hugh's opinionated, long-time butler all bring more humor, and emotion, to the process. I can't wait to discover what Heath has planned for Minerva's sisters and am hopeful we'll see both Giles and Hugh's butler in the books to come.
If you enjoy historical romance, laugh-out-loud comedy, pitch-perfect banter, main characters who tug at your heartstrings, and an ensemble secondary cast that is pure gold, don't miss Never Fall for Your Fiancée by Virginia Heath. It's one of my favorite books this year and going straight to my comfort read keeper shelf to revisit whenever I need an emotional boost. I loved it!
Posted by pjpuppymom at 5:00 AM