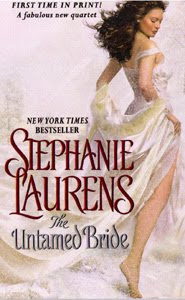 India 1822
Five army officers of the East India Company have undertaken a top-secret mission to end the heinous acts ordered by the evil Black Cobra. After one of them is killed while obtaining critical evidence of the villain's identity, the other four leave for England by separate, secret routes. Three carry copies of the evidence while one has the original. Their goal is to lure the Black Cobra back to his native England where they can bring him to justice and end his reign of terror forever. The first to arrive is Colonel Derek (Del) Delborough.

Del's task once he arrives in England is to safely deliver his packet of evidence to Royce Varisey, Duke of Wolverstone (Dalziel from the Bastion Club series), not to escort a woman he hasn't seen since childhood to her home. The last thing he needs is to be saddled with some simpering, English miss when so many lives depend upon his attention being focused on the deadly Black Cobra but his plan to shed himself of her as quickly as possible hits a snag when the woman in question saves his life, exposing herself to the Black Cobra's men and placing her own life in danger.

Since "the scandal" seven years earlier, Deliah (not Delilah) Duncannon has been living in exile with her uncle in the Caribbean. During that time she has remained an opinionated and independent thinker while suppressing her natural sensuality beneath a veneer of sensible practicality. Though firmly on the shelf, she longs for a family of her own but has been told her entire life that she does not fit the requirements of the type of woman English men marry. Not intimidated in the least by Colonel Delborough, she knows full well that he's keeping secrets about what he's really doing in England and Deliah has no intention of being left out of the action.

I really enjoyed the pairing of Del and Deliah. These are two mature people who match up well, becoming partners in every sense of the word, and I was in their corner cheering them on. I found Deliah's journey to self-worth and self-acceptance, thereby freeing her to accept Del's love, to be especially poignant. The story moves along at a good clip, keeping my interest engaged throughout, with plenty of action, lots of sensual heat and an evil villain who manages to stay one step ahead of the good guys. The participation of the Cynster men and their wives was a delightful surprise! I always enjoy visiting with old friends and they brought an added dimension to the story without overshadowing the hero and heroine. I hope we'll see more of them in the remaining three books.

The Untamed Bride is a terrific story, launching what looks to be an exciting new series from Stephanie Laurens. I'll be counting the days until the February 2010 release of The Elusive Bride, the second book in The Black Cobra Quartet.