Today we are thrilled to have Jenna Petersen (also known as Jess Michaels) as our special guest author! I've been a fan of Jenna since her debut book, Scandalous, hit the shelves. She is one busy lady, let me tell you. Not only does she write under and have a website for both of her pseudonyms, she also runs The Passionate Pen website, a valuable resource for anyone who wants to write and become published. Her latest book, What the Duke Desires, is the start of a new series and one that you don't want to miss! Check out my review here. So without further ado, please help me welcome Jenna Petersen to The Romance Dish! 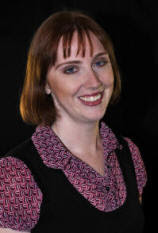 Hi everyone! And thanks so much for having me today! I’m so excited to be part of The Romance Dish’s launch week!

So if you don’t know me, I’m Jenna Petersen and I write historical and erotic historical romances. Oh… and I also like to break heroes. It’s true. Think of my track record. In SCANDALOUS my hero was a bastard with a terrible mother and an even worse brother who is forced into a marriage. FROM LONDON WITH LOVE, accused of treason. DESIRE NEVER DIES, feels responsible for the terrible injury of his best friend and partner. SEDUCTION IS FOREVER, adrenaline junkie with a death in his past. LESSONS FROM A COURTESAN, another forced marriage and has to keep a terrible secret from his beloved brother. And my last book, HER NOTORIOUS VISCOUNT, dead twin brother, forced to take on a title he hates. 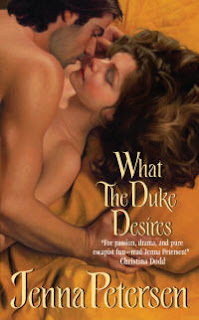 So, yeah, I like to take my men and twist them in knots. And my latest release, WHAT THE DUKE DESIRES, is no different. However, I do think I’ve reached the peak of my sadism against heroes in this book.

First, let me say that Simon Crathorne, Duke of Billingham is a decent man. He’s not your typical rake (though he’s certainly sexy as all get out) and he’s basically trying to do the right thing. That made breaking him a little harder in some ways. But I managed to do it by dismantling everything he ever believed about his father and ultimately everything he ever thought about his own life.

Twisted, right? And I had so much fun doing it. And even more fun knowing that my heroine had it out for him (at least for some portion of the book) even as he’s falling in love with her.

So you may now be thinking, “Sheesh, lady, why mess with a nice guy?” Well, I have to tell you, I love romances where the couple has to struggle and battle, ones that tie me in knots and make me wonder if it can all really work out. I think it makes the happily ever after all the sweeter. And there was nothing sweeter to me than getting Simon and Lillian there.

Oh yeah, and this book starts a series, The Billingham Bastards. And since the word “bastards” (one of my favorite themes, obviously) is in the title, you can bet I’ll be tying my other two heroes from the series into knots, too. But that’s for a different day…

So do YOU like the battle of a romance to get to the happily ever after?

And I have an extra special treat for you, dear readers! Jenna has graciously allowed me to post the cover for her upcoming Jess Michaels' release NOTHING DENIED! 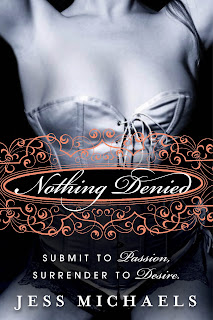 So, what do you think? I love it and think it fits perfectly with the other books in the series. NOTHING DENIED is the third book in the Albright sisters series and releases February 2, 2010! I can't wait for this one!!