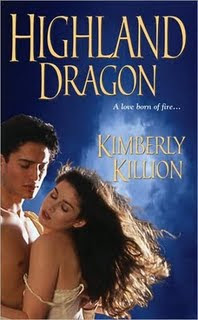 As a young lad, Calin McLeod witnesses the murder of his father at the command of his enemy’s leader, Laird Kinnon. To add to the horrific memory of watching the life leave his father’s eyes, young Calin also bears witness to the murder of the woman his father loves dearly, Lady Kinnon, immediately after she gives birth to the daughter of the evil Laird Kinnon. Even at the tender age of 10, Calin knows the creed of every Scotsman. No one messes with family!! Determined to avenge his father’s murder, Calin takes the newly birthed baby from the priest’s hands and brands the bottom of the baby girl with his father’s signet ring. Knowing this baby girl is the key to his revenge and that he will come back to claim her as his wife in the years to come, Calin gives the young infant to his best friend’s family to raise and protect.

Akira Neish has always known she would marry her benefactor, the man who has provided for her since she was an infant. But of late she is wondering what is taking the man so darn long to come and claim her. When a group of warriors believing she is a witch all because of a mark on her derriere kidnaps Akira and takes her to Tigh Diabhail to be sold to the highest bidder, Akira believes her savior will never show. But at the last minute, a man arrives with Akira’s brother Kendrick and bids an extremely high amount for her. Unbeknownst to her, this strange man is her benefactor and soon to be husband.

From the first meeting of Calin and Akira, the electricity between these two can be felt through the pages. Though it was not love at first sight, the first interaction between the two does set the atmosphere of frank talk in their relationship. Akira is a strong-willed young woman who thinks quickly on her feet, speaks her mind and at moments demands things her way. When it is revealed that Calin is Akira’s benefactor and has plans to marry her, Akira quickly demands a couple boons from Calin before giving her agreement to the marriage. The majority of her requests are simple and ones Calin quickly approves. But when she informs Calin that if he intends to kiss her frequently prior to their marriage then he will need to shave his beard, Calin doesn’t know what to think.

Calin’s eyes widened. “M’lady, a Highlander without a beard is as rare as a sheep with nay wool. I have nary a doubt, ye are testing me.”

Akira crossed her arms over her chest and raised both brows to challenge him.

“Ye cannae be serious. Ye want me to . . . shave. The bath is acceptable, even desirable at this point, I admit. But the beard? ‘Tis a most unreasonable request. Ye cannae ask this of me.”

Aghast at the demand by Akira, Calin questions himself. Why should the chieftain of Clan McLeod shave his beard? But at this point in the story, I believe that Calin has already given his heart to Akira. Though the words may not have been spoken yet, Calin’s actions speak louder than those words. This seemingly insignificant request proves to be the beginning of the true relationship between Calin and Akira. Though not particularly pleased with his clean shaven face, Calin’s compliance with Akira’s request shows his promise to listen and respect her opinions. As you can see from this passage in the novel, Calin realizes he is falling in love with this woman who is to be the tool of his revenge.

"Calin stood at the entrance to the kirk beside Father Harrald when Akira floated through the procession of people and into his view. His knees locked, and what felt like a small animal jumped inside his gut. When a constricting force clutched at his heart, he gave his head a quick shake. What was wrong with him? He was a leader. A warrior. He refused to believe the woman he was about to marry for the sake of protecting his clan shared part of his heart, but the undeniable weight pushing against his lungs challenged his theory. As the timeless moment whirled around him like Highland mist, he realized Akira would be more than just his lady wife. She would be his companion. His friend. His lover."

Kimberly Killion has done it again with this novel. I have to say this story kept me riveted the entire time. The relationship between Calin and Akira is one you would (or at least should) expect from any Highland medieval story – strong, passionate, opinionated, and sensual with utter devotion and conquering love as the threads that bind hearts and souls together.

The cast of secondary characters is second to none. From the despicable, creepy (really creepy!) Laird Kinnon to the adorable, young Andrew who grabs at your heartstrings to the older, feisty Aunt Wanda who gives the elders of the clan a tongue lashing to best friend Kendrick who is begging for his own story to be told (or at least I’m begging for his story!). All of these unique individuals add just the right amount of flavor to this story.

This is a book that now has its place on my keeper shelf. So leave some space on your keeper shelf and go pick up Highland Dragon. You won’t be disappointed!

Disclaimer: Even though I have a personal and business relationship with Kimberly Killion, I have reviewed this book with the same sense of fairness and objectivity that I bring to every review.