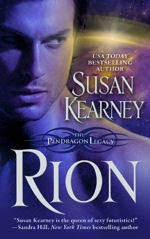 In the second book of Susan Kearney's Pendragon Legacy trilogy, the people of Chivalri face extinction at the hands of their cruel captors, the Unari, and the brutal Unari torture device, the Tyrannizer. Chivalri's only hope of survival resides with Rion Jaqard, a native son who escaped the Unari and is now living on Earth, on the other side of the galaxy.

Blessed, or cursed, with visions of the future, Rion knows that time is running out for the people of Chivalri.  He must act now if he has any hope of saving the people of his country but to launch a successful rescue he needs the help of Marisa Rourke, the telepathic twin of his friend and fellow space explorer, Lucan.   Marisa has the unique telepathic skills that enable her to communicate with dragonshapers, a skill that is essential to Rion's plans, but with her commitment to Earth's new population of dragonshapers it's a certainty she won't agree to travel with him to his home planet.  What's an alpha hero to do?  Why, use their mutual attraction to seduce and kidnap her, of course!

In RION, Kearney once again takes the reader on an action-packed roller coaster ride to a far off planet.  She builds new worlds with vivid descriptions and intricate details that make them come alive in my mind though there were times, for me, when all the details and explanations became a bit overwhelming and began to detract from the story.

With Marisa and Rion, the author has created two strong, sexual people who set the pages on fire with their passion.  Their romance is not an easy journey, as they battle evil enemies, internal conflicts and life-long expectations along the way.  They are two people who deeply love their respective planets and have strong emotional ties to them.  A happy ending for them will require compromise and sacrifice...and is not a foregone conclusion.

I enjoyed Rion and Marisa's story.  Their quest to save Rion's planet is compelling and the sex between them is sizzling but I missed the deep emotional connection between the hero and heroine that existed in LUCAN, the first book in this trilogy.  I kept looking for it and waiting for it but it just never happened for me.  While that missing emotional intensity kept this from being a great read for me, I still enjoyed it and am looking forward to the March 2010 release of JORDAN, the final book in the Pendragon Legacy trilogy.