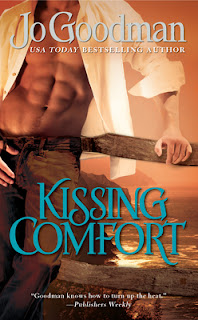 I read my first Jo Goodman book back in 1992 and promptly fell in love with her beautiful writing and glommed her backlist. When I pick up one of her books, I am guaranteed an extremely clever, thought-provoking, and emotional story. Kissing Comfort is no different.

Deep in the foothills of the Sierra Nevada Mountains, prospectors Newton Prescott and Tucker Jones come upon the site of a wagon train massacre. Newt and Tuck do the honorable thing and bury the dead properly. When they’re about to leave, they hear a muffled cry behind some rocks and discover a traumatized little girl. They debate over what to do with her and decide that the only way to keep her safe is to keep her with them. Because of the tin of Dr. Eli Kennedy’s Comfort Lozenges she holds and won’t let go of, they name her Comfort Kennedy.

Twenty years later, Newt, Tuck, and Comfort live in San Francisco and own and run the very successful Jones Prescott Bank. Newt and Tuck had struck it rich thanks to some sound investments and since Comfort has a head for numbers, it seemed only fitting for them to open a bank. At a birthday party for his brother, Comfort’s friend Bram DeLong makes the surprise announcement of his engagement to Comfort. It’s even a surprise to Comfort. Bram is her dear friend, but Comfort knows he doesn’t really want to marry her and doesn’t know what game he’s playing. Bram asks her to go along with it just for a little while and she reluctantly agrees. Afterward, she walks through the garden and encounters the birthday boy, Bode DeLong, lounging on a bench.

She noticed that he didn’t stir. He remained in a half-reclining positioning the corner of the bench, an arm extended across the scrolled back, one leg drawn up at the knee and the other stretched and angled in her direction. He regarded her without any particular interest, as if he were already bored by their brief exchange. It made her wonder why he’d spoken in the first place. She might easily have passed without noticing him. Almost immediately, she corrected herself. For reasons she did not entirely understand, failing to notice Beauregard DeLong had never been possible.

Bode may seem as if he’s not interested in what Comfort has to say, but that is far from true. He first noticed her at her come-out party nine years before, but never got the chance to talk to or dance with her once his charming younger brother captured her attention. After that, Bode left to fight in the Civil War and now runs Black Crowne Shipping, the family enterprise. Comfort tells Bode about her exchange with Bram and Bode agrees that his careless brother is up to something. Later that week, she and Bode share a kiss and neither one know what to think. After they share a second kiss, Bode decides to make his move and explains as much to a laid up Bram.

“Newton Prescott and Tucker Jones made an appointment last week to see me at Black Crowne on Wednesday afternoon. Miss Kennedy will accompany them.”

“I’m certain to talk to her, but not about you. I’m going to throw my hat in the ring, Bram. I thought it was fair to let you know.”

“Throw your hat in the ring? Fight me for her, you mean?” He looked down at himself and then to Bode. “How is that fair?”

“I hope it won’t come to a fight. I recognize you’re at a disadvantage, but I know you’re not helpless. You never are.”

Bram pushed himself as upright as he was able. “She won’t have you, Bode. You scare her. You always have. It can’t have escaped your notice that when you walk into a room, she walks out.”

“Oh, I’ve noticed.” Bode dropped his feet to the floor and rose from his chair. Favoring his brother with a faint but consciously shrewd smile, he buttoned his jacket, “You’re so used to women showing interest in a particular and obvious way that you don’t know that some of them reveal it in another.”

“Wait!” Bram called after Bode as he started to leave. “What are you saying?”

Bode merely smiled to himself and kept on walking.

Newt, Tuck, and Comfort are on their way to meet Bode when their carriage gets ambushed and Comfort is kidnapped by a notorious gang. Bode takes matters into his own hands, but can he rescue Comfort and win her heart before it’s too late?

Jo Goodman’s books are one of the main reasons why I love historical romance so much. She draws readers in with her multi-layered and complex stories and unravels the secrets slowly. She doesn’t give anything away until it’s time for the reader to know. Her characters are intuitive and convey a great deal without having to spell it out. Bode is a responsible and contemplative man who understands Comfort and knows what she needs better than anyone. Comfort appreciates Bode and how patient he is with her. Their mutual respect for one another is not only evident through their words—it is shown by their actions. I love protective heroes and heroines who think before they speak or act. Even the secondary characters are vivid and memorable. I simply adored Newt and Tuck!

If you like profoundly intelligent historical romance, I can’t recommend Kissing Comfort enough! And if you’ve never read a Jo Goodman book, what are you waiting for?