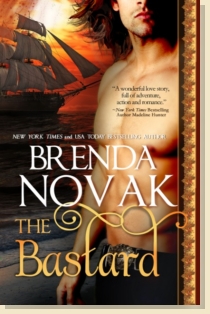 Brenda Novak is best known for her bestselling romantic suspense titles, but some longtime fans will remember her first book, the historical romance Of Noble Birth (Harper Torch, 1999). Circumstances took Novak’s career in a different direction, and the historical romances she had planned to follow her first one were never published. But the digital revolution in publishing has allowed her not only to rerelease Of Noble Birth but also to publish the book that was meant to follow it, The Bastard.

Jeannette Boucher is quite young, but she is old enough to understand that her arranged marriage to the very wealthy Baron St. Ives, forty years her senior, will be the salvation of her family, French aristocrats now destitute in the wake of the Revolution. With the ceremony behind her, Jeannette is waiting for her husband to consummate the marriage when her younger brother brings her word that her ancient, impotent husband is so desperate for an heir that he has invited several of his peers to share the bridal bed with his new bride. Horrified, Jeannette escapes into the night, intending to flee to London and find sanctuary with an English cousin. Sheltering from the rain in a pub frequented by sailors, she learns their ship will sail to London before it sets out to sea. Pleased with the promise of a mere two-day journey, Jeannette disguises herself as a ragamuffin boy and persuades a ship’s officer to accept her as a new recruit.

The officer is Lieutenant Crawford Treynor, the bastard offspring of an aristocratic English lady and a man not her husband. Given to an abusive farmer to raise, Treynor ran away at fourteen after a particularly brutal beating and joined the Royal Navy. He has worked himself up to his present rank through initiative and effort and is determined to one day command his own ship. Protecting Jeannette jeopardizes all he has worked to attain, but his honor—and his heart will allow him no other choice.

This is a high-adventure tale, romantic in a fashion rarely seen in today’s romances. In style, its similarities to Of Noble Birth are strong, but the strengths that have made Novak’s romantic suspense popular are also present: her gift for creating compelling characters, her attention to detail, and the mix of action and relationship development. Both Jeannette and Treynor are strong, distinctive characters. Jeannette, despite her youth, is no passive miss waiting to be rescued, but neither is she a contemporary woman in period costume. She initiates action, she possesses courage and persistence, but her vulnerabilities are those of a woman alone in an age when men held most of the power.

Treynor’s ambition is fueled by his pride and his drive to overcome the stigma of his birth, but his achievements are no less admirable for that. His anger at his mother’s treatment of him as a child and at her refusal to answer his questions rings true. The respect he earns from those under his command affirms his strength and leadership. The details of life on an English ship add authenticity. If all the loose ends are tied rather too neatly in the end, that’s a small flaw, one that readers who like their HEAs to be inclusive and unambiguous may find quite satisfactory.

Reading The Bastard was an interesting experience. I liked seeing the seeds of a talent that has developed beautifully, but I ended it knowing that I prefer Novak’s romantic suspense and contemporary romances. It was too reminiscent of the books that drove me from bestselling romance at a time when many readers were becoming hooked on it. Readers who remember that period more fondly than I or younger readers with more of a taste for swashbuckling will likely embrace Brenda Novak, historical romance writer, with delight. As for me, In Close (Bulletproof Book 3) is on my TBR shelf, and I’m eager to read it.