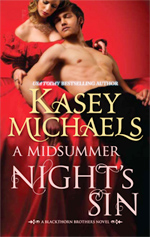 Being a debutante was boring.  It probably was supposed to be boring, so that everyone would quickly find someone suitable, marry and never have to do it again.  Being a Hackett, daughter of the poor, martyred Lady Leticia and the totally unacceptable Reginald, Regina had endured her share of impolite stares, snide innuendo and even a few horrified mamas, who had physically escorted their sons in the opposite direction when there was a chance of having to stop and exchange pleasantries with the wealthy but socially inferior Miss Hackett.  Except for those titled but poor as church mice peers who might entertain lowering themselves to courting her father's money.  Those she avoided, much to her papa's chagrin.  To be able to dance - yes, and to flirt - without anyone knowing her name?  To not be the coarse, jumped-up shipping merchant's daughter or even the sad, drunken Lady Leticia's daughter, just for a few stolen hours?


And that was how Regina Hackett found herself going along with her cousin, Miranda's outrageous scheme to attend Lady Fortesque's masquerade ball.  Regina has always known that she would be her merchant father's ticket into the ton and has resigned herself to spending the rest of her life with some titled old man three times her age but what could be the harm in a few stolen moments of fun and freedom before that happens?  The harm, as it turns out, would be more than Regina and Miranda could have ever imagined.   For Regina, it means a moonlit turn in a handsome, charming man's arms and her very first kiss, one that would ultimately ruin her for any other man's attentions.  But for Miranda, their short walk on the slightly wild side would have far more devastating consequences.

They called him Puck, the name delighting them.  He was so very unacceptable, yet welcomed everywhere.  He was le beau batard Anglais, the beautiful English bastard, the beloved pet of Paris Society, and completely, wholly delicious.

And now he had said his adieus to the openly distraught Paris and returned to the land of his birth, just in time for the London Season.

Where he was known only as Robin Goodfellow.

Youngest, and most carefree, of three bastard sons of a duke, Robin Goodfellow Blackthorn, known as "Puck," has returned to London determined to be accepted by the ton.  His attendance at Lady Fortesque's masquerade is not for pleasure but, rather, the first step in securing the introductions and "sponsors" he will need to accomplish his task yet he finds himself being diverted by a most unusual young woman; a beautiful, well-spoken, intelligent woman whom he mistakes for a courtesan or, at the very least, an actress (for, clearly, that is the only type of woman who would be at this ball) which leads to this delightful garden encounter.

He kissed her mouth, her throat, bent her back over his arm to press his lips against the smooth expanse of skin above the neckline of her gown.  And all the while, he crooned to her in French.  How lovely she was.  How he was being made mad by her virginal game playing.  What he would do to her to reward her, how he would do it, how she would know she had never been made love to before, no matter how many men she'd had.

And she whispered back to him:  "I have a hat pin poised to stick in your ear, and I will do it if you do not release me at once."

Of  course, there's much more to that scene but if I included every quote I'd like to from this book this review would go on forever.

Regina is sure she'll never again lay eyes upon the deliciously handsome Puck but when she returns to the ballroom and discovers that her cousin has mysteriously disappeared, he is the only person she dares turn to for assistance.  The evidence makes it pretty clear that Miranda has been abducted from the masquerade.  Of course, she can't tell either set of parents that without owning up to the fact that she and her cousin were there in the first place.  She tells them that their coach was set upon by brigands who took her cousin but her father doesn't buy the story.  He's certain that the reckless Miranda is on her way to Gretna Green with some foolish young man and focuses the investigation there.  It's up to Regina to secretly work with Puck to uncover what really happened to Miranda, a decision that continues to deepen the desire between them as it leads them on a fast-paced, perilous journey, and what they discover will shake the foundation of everything Regina has ever believed.  Will the journey also give them the courage to reach out for a love that surpasses any they've ever known?  You'll have to read the book to find out!

I'm a Kasey Michaels fan from way back and this book reinforces why I enjoy reading her stories so much.  Filled with humor, action, sensuality and suspense, A MIDSUMMER NIGHT'S SIN is a fast paced, highly satisfying ride.  Puck and Regina are thoroughly enjoyable characters.  I like them.  I cheered for them.  Michaels has surrounded them with intriguing secondary characters as well and I hope to see some of them in future books.  One of them, Puck's brother, Jack will be the hero of Michaels' next book in the Blackthorn Brothers series.  His other brother, Beau, was the hero of Michael's first book in this series, THE TAMING OF THE RAKE.

I'll leave you with one last quote from this delicious historical romance...because I just can't help myself.

One week.  Seven days or even less to learn what it was like for a woman to be made love to by a man such as Robin Goodfellow Blackthorn.  For certainly no man her father chose for her would hold a candle to the glories Puck had hinted at that night in the gardens outside that terrible warehouse.

She hadn't noticed the smell of fish because he had been there.  She hadn't seen the squalor behind the palm trees and draperies because he had looked into her eyes, blinding her to everything else.

She hadn't shied at the tawdriness of it all because she hadn't felt tawdry or loose or lacking in morals when he'd kissed her, touched her, whispered thrilling, wickedly naughty things against her ear.

She'd felt alive.  Alive.  As she had earlier, in the drawing room.  Not wicked, not naughty, not even simply curious.  Alive.