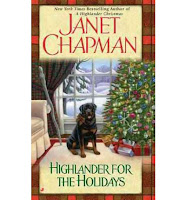 
I’m a sucker for Christmas stories, any book with Highlander in the title or a cute dog on the cover. Janet Chapman’s Highlander For The Holidays has all three, which makes it irresistible to me. Score!!

Jessie Pringle decides to move to the little town of Pine Creek, Maine to put her the nightmare of the past four years behind her. A vicious attack took the life of her husband and scarred Jessie physically and emotionally, and she wants nothing more than to start fresh, and hopefully escape the flashbacks that continue to plague her. Her one hundred-pound Rottweiler service dog, Toby, is ultra sensitive to her when a flashback is imminent, so he can lead her to a “safe place”. Spending her first night in town with her friend, Merissa, at Pete’s Bar and Grill seems like the perfect way for Jessie to get the lay of the land, see what the locals are like. One local, Ian MacKeage, catches her eye and vice versa. After spending some time with him on the dance floor, Jessie is smitten with the tall, sexy, green-eyed man. But she’s far from sure that any man, even Ian, will be able to accept her scars, both inside and out.

Ian notices Jessie the moment she walks in the door of Pete’s. In fact, the attraction is so immediate, it takes Ian aback, because he can’t remember the last time a woman had that effect on him. Ian is taken with Jessie’s beauty, but he also notices a bit of a wild woman underneath all of that poise, and that is something he wants to uncover. Jessie definitely responds to his kisses, but Ian feels her fear and uncertainty at taking their relationship further. Her scars don’t bother him; he has more than a few of his own. Still they both need to heal their pasts if they are ever to have a future together. But with a little magical help from a kind, but meddlesome hermit----Roger AuClair de Keage, Ian’s Scottish ancestor---and faith in each other, Jessie and Ian are destined for a happily-ever-after, and a very merry Christmas. Here’s some sage advice Roger gives Jessie:


“Healing one’s self is nearly impossible---and far less rewarding---compared to the magic that’s created when two souls combine their strengths and heal together.”


Janet Chapman’s Highlander series is still going strong with this eighth book. Don’t despair if you haven’t read them all; I’ve only read a few myself. It isn’t necessary to read them in order, although I keep telling myself I’m going to glom them all---more yummy Highlander goodness to savor. *g* Ian is one sexy alpha hero, but sensitive in all the right ways. Jessie has been through hell and back, and she is still sassy enough to keep Ian on his toes. Her loyal canine, Toby adds so much fun to the story---if only he could talk! And of course, the mysterious Roger gives this Christmas tale a dash of magic that makes it close to perfect. If you’re looking for a holiday story that will make you laugh, cry, and believe in magic, Highlander For The Holidays is the perfect gift to give yourself. 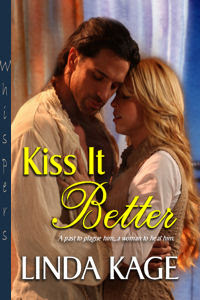 
A PAST TO PLAGUE HIM...When his sister is attacked, memories of his miserable childhood assault Reed Walker and interfere with his perfectly structured life. To add to the chaos, just when dating becomes the last thing on Reed’s mind, Sophia Eschell, the very woman he’s been dreaming about for the past three years, noses her way into his life.


AND A WOMAN TO HEAL HIM...After hooking up with too many troubled men, Sophia is determined to find a normal, average guy sans baggage. She turns her attention to Reed, only to discover he has more issues than anyone. But if he can learn to open up to her, can she honestly reject him or will she kiss it all better?

Reed Walker is the quintessential accountant – clean cut, clothes neatly pressed, and standing a little on the outside of any social circle. While he thoroughly enjoys his occupation, the only important things in his life are his younger sister and his best friend. When Reed receives the call that his sister has been brutally attacked, he feels as if his peaceful life has been shattered. As he helps his sister physically recover and begin the mental healing process, memories of a horrible childhood come back to haunt him. Reaching for any safety line he can find, Reed grabs hold of the rope of friendship (and a little more) offered by coworker Sophia Eschell.

Sophia Eschell has a terrible track record with men. She seems to find the guy with too much baggage and not enough guts to face it. Having always thought Reed Walker was a handsome man, Sophia decides it is time to let Reed know she is interested in him. But just as she begins to drop some pretty significant hints, Reed’s world falls apart and Sophia once again finds herself dealing with a lot of baggage. However, this time Sophia believes the reward at the end will be so worth it.

This story is one that will pull at every string in your heart, but also gift you with a laugh and a smile. My heart ached for Reed as he dealt with his sister’s tragedy and the memories of his own awful ordeal as a child. Watching Sophia coax a smile or a laugh from Reed made me sigh. If you are looking for a great story about overcoming obstacles and finding love, then this one is just for you.


Beckett Montgomery and his brothers, Owen and Ryder, own Montgomery Family Contractors and have taken on the monumental task of restoring the centuries-old inn located in their beloved hometown to its former glory...and then some. They, along with their mother, intend to make each room state-of-the-art without neglecting the historic significance and ambiance. They view it as a labor of love, as does the rest of the close-knit community. Beckett knows everyone around town, but no one gets him tongue-tied like Clare Brewster.

Clare came back to Boonsboro over five years ago after her husband was killed in Iraq, leaving her with two young sons and another on the way. Coming home gave Clare the time to grieve and the ability to surround her boys and herself with family and friends. It also allowed her to realize her long-time dream of opening a bookstore. She is thrilled that the Montgomery brothers are renovating the inn, which is located across the square from Turn The Page. When Beckett gives her a tour inside the half-finished inn, they share a heated kiss. The encounter leaves her breathless and feeling things she hasn’t felt in a very long time.

The Next Always is the first in Nora Roberts’s new contemporary trilogy based upon the historic Inn BoonsBoro and surrounding shops in Boonsboro, Maryland. The inn is so vital to the story; it’s almost like a character itself. The place had been there for over two centuries... And somehow it was changing everything.

I absolutely adored Beckett Montgomery. He’s compassionate and a total nurturer and I thought it was incredibly sweet how self-conscious he was around Clare at the beginning. I was so glad that Clare wasn’t afraid to fall for him—too many times I read where a hero or heroine’s past holds them back. She sees and appreciates how good Beckett is for her and her boys. And the scenes between Beckett and the boys are priceless! This story has a touch of a paranormal element to it that some might find far-fetched, but I accepted it because of the thread that ran throughout the story. The Next Always is a wonderful start to the Inn BoonsBoro series and I look forward to Owen’s and Ryder’s stories in the near future. I’ve never been to Boonsboro, Maryland, but after reading this story and learning about the town and the inn, I am ready to book a trip!

~Andrea
Posted by pjpuppymom at 12:01 AM