Review -- Baby It's Cold Outside 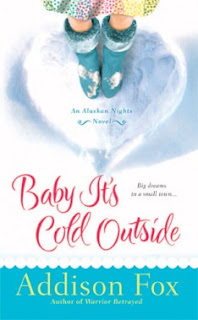 Free-lance writer Sloan McKinley is at her wit’s end with her mother’s constant “When are you getting married?” Sloan is tired of the objectionable men her mother insists would be perfect for her. After enduring an embarrassing Thanksgiving with her family and while sharing a ride home with one of said objectionable men, Sloan is grateful for the interruption of a text from her best friend, Grier. Grier is in Indigo, Alaska wading through a legal mess in regards to her deceased father’s estate. She begs Sloan to come and lend support to which Sloan immediately accepts and views it as a pleasant escape from the hustle and bustle of New York City...and her mother.

Walker Montgomery is Grier’s lawyer and the grandson of the town’s mayor, Sophie Montgomery. Sophie and her two closest friends host an annual competition for bachelorettes to possibly (and hopefully) win the hearts of their grandsons. Soon after Sloan McKinley arrives, she decides to do a story about the competition—getting the scoop about the hosts, the events, and the competitors. Walker challenges her to enter the contest to get the story “right”. She agrees but only if he will enter the bachelor auction...something he has been able to avoid for years. He agrees and takes her on a tour of the town, which opens her eyes and shows her that Indigo isn’t what she thought it would be.

Baby It’s Cold Outside is the first book in Addison Fox’s Alaskan Nights series. I enjoyed this fun, sexy story set in a cozy, small town full of charming people. Sloan and Walker are intriguing characters who are instantly drawn to one another. For Sloan, coming to Indigo starts off as helping a friend, but turns into much more than that. It becomes a journey of self-discovery. She learns things about herself that she may never have learned had she not left home. This exchange between Sloan and Walker takes place while he shows her around Indigo:

“It’s beautiful. And unexpected. Pretty much like everything else in this town.”

“You haven’t been here that long.”

“And hardly anything is what I thought it would be.

... “I’ve spent my life in an environment that’s all about expectations. And I guess I never realized how many of them I had myself. It’s sort of an irritating discovery, truth be told.”

It was one of my favorite scenes between the two. Walker has his own demons to overcome and what he does for Sloan at the end of the book made me smile in a big way. :)

The secondary characters are appealing and add depth and it’s clear who will be paired up in the future books of the series. I’m just sad that I have to wait a whole year until my next trip to Indigo! Until then, I’ll simply revisit everyone in Baby It’s Cold Outside and recommend that you do, too!