Review -- A Most Dangerous Profession 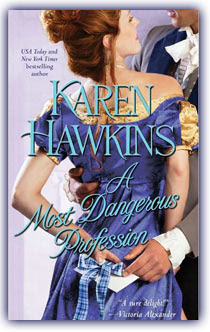 For beautiful, seductive Moira MacAllister, the stakes have become terrifyingly high. Her daughter has been abducted and a priceless ancient relic is the ransom. Moira must acquire it at any cost, even if it means confronting the man she once duped and left, a man who still doesn’t know she has a child . . . and that he is the father.

Robert Hurst, an operative in the king’s service, has never forgiven the mysterious spy who seduced him into marriage and then disappeared without a trace. Now, as he pursues the onyx box that will save his brother’s life, their paths cross again. But Robert isn’t sure which he longs for more—to satisfy his lust for revenge or to quench his relentless hunger for this bewitching woman.

When Moira reveals to Robert her long-kept secret, however, he realizes his burning desires must wait as a treacherous foe closes in, threatening all they hold dear . . . and their second chance at love.

Moira MacAllister will do anything it takes to retrieve the onyx box that will ensure her little girl's freedom from George Aniston, the despicable man holding her captive. Of course, she's not the only one who wants the box; Robert Hurst, the man she hasn't seen in years---right after they married---needs the box to ensure his brother, Michael's freedom. When she finally comes face to face with Robert, it's not exactly a happy reunion. Robert is still angry with the woman who tricked him into marriage years ago, but he still finds her incredibly beautiful, much to his annoyance. But these two will have to put their differences aside and work together to save the two precious lives that are at stake.


... Moira MacAllister wasn't the sort of woman one forgot. It wasn't just that she was beautiful, though she was, spectacularly so. It was the combination of her looks, her spirit, and her vibrancy. One never forgot how she looked, but more importantly, one never forgot how she made you feel. Just one smile could grab your soul...and she would extract it if you weren't careful.


Robert Hurst has never forgotten, or forgiven, the beautiful spy for making a fool of him. She managed to ensnare him while she was posing as a Russian princess, while he was supposed to be trapping her. Now he finds himself going head to head with Moira, and this time Robert vows to keep his sanity, and lust, in check. Easier said than done, when he realizes he has stronger feelings for her than anger. When he discovers that he has a daughter whom he has never met, and she is being held for ransom, Robert realizes that nothing matters more than saving her and making her captor pay. And it soon becomes obvious that he and Moira must make peace with their past in order to have the future they both desire.

Karen Hawkins writes some of my favorite historicals--- family series filled with humor, action, and plenty of heat. I've enjoyed the adventures of the Hurst family, and am really looking forward to Michael's story. I have a feeling he and his heroine will put the rest of his siblings to shame when it comes to ups and downs on the way to HEA. 'Never a dull moment' should be the Hurst family motto. *g* If you're looking for a guaranteed-good-time-read, A Most Dangerous Profession is the book for you.