Review -- The Other Guy's Bride 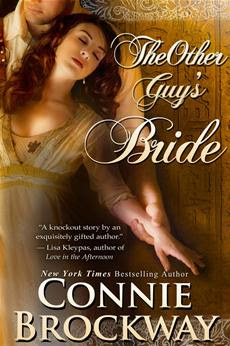 For many years---fourteen to be exact---Connie Brockway fans have been begging for a sequel to As You Desire, the story of Harry and Dizzy. Well, fans, the time has come, and it was worth the wait!

Ginesse "Ginny" Braxton is traveling from England to Egypt, a country she knows like the back of her hand thanks to being the daughter of famous Egyptologist, Harry Braxton. But Ginesse longs to make a name for herself, not just ride on the coattails of her famous family. She also wants to prove she's not the jinx and magnet for trouble that everyone says she is, and she's found the perfect way; she thinks she has found the location of the lost city of Zerzura. Of course, she needs to find someone to lead her across the desert, and Ginesse knows full well that no one will want to accompany the Braxton chit. Fate presents a situation that she cannot resist; a young woman, Mildred Whimpelhall, who is a passenger on the ship with Ginesse is on her way to meet her fiance, Colonel Lord Pomfrey. Mildred is so seasick that she decides to get off the ship in Italy and continue her journey to Egypt by rail. Ginesse kindly makes Mildred's arrangements for her, but unbeknownst to the trusting Mildred, Ginesse decides to assume her identity and travel to Fort Gordon, which is within thirty miles of Zerzura. It was all too perfect. Ginesse should have known better.


James "Jim" Owen is a tough adventurer who owes a debt to Colonel Lord Pomfrey, so he agrees to accompany Pomfrey's fiancee across the desert to Fort Gordon. Not what Jim considers high on his list of ways to have a good time, but a debt is a debt. After all, Jim has been in many a dangerous situation, so providing escort to a meek and mild English miss should be a walk in the park. Once he meets Mildred Whimpelhall----aka known as Ginesse Braxton---, that notion goes straight out the window. She is anything, but meek. In fact, she talks nonstop and is a veritable magnet for trouble. But the biggest problem for Jim is his attraction to her. She frustrates and fascinates him, and no matter how many times he tells himself that she belongs to another man, thereby making her off limits, he just can't resist her.


"Colonel Lord Pomfrey. You never use his given name." he was looking down into her upturned face, moonlight carving his into hard angles and cold planes.

"Of course I know it," she said, trying to sound convincing because in truth she did not remember Pomfrey's Christian name.

"Because if you were mine, I would want you to say it, even when I was not there." He was so close she felt his warm breath sluice over her lips, so close she could see the way his lashes tangled at the corners, so close she could see flecks of sand at the base of his throat. His gaze had turned smoky and brilliant all at once, with an intensity she'd never seen before. It made the breath catch in her throat and her heart race.

Fool that she was, even though she intuited that danger roved very near and that she ought to keep very still and very silent, she could not keep from whispering, "Why?"

"Because every time you said my name, it would touch your lips." His voice lost its hard edge, grew as dark and smoky as his gaze. "Like a kiss."


The Other Guy's Bride is a rollicking romance, a turn-of-the-century adventure with a high spirited, mismatched hero and heroine with secrets aplenty. Their banter is reminiscent of some of my favorite movie pairs: John Wayne and Maureen O'Hara, Humphrey Bogart and Katharine Hepburn, and Michael Douglas and Kathleen Turner. Throw in a little Indiana Jones, and it all adds up to a can't miss good time. Connie Brockway has a deft hand with humor, and I laughed out loud more times than I could count. There is an equal amount of soul stirring tenderness and heart pounding sensuality. All of the elements for a winning romance. I cannot recommend The Other Guy's Bride highly enough! For those who do not have a Kindle, don't despair. It will be released in trade paperback on December 22nd. Just in time for the holidays. *g*