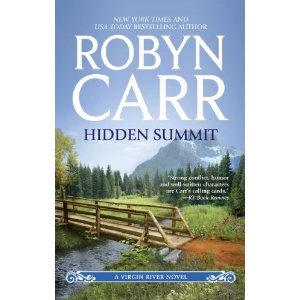 Danson Conner has spent his whole life in Sacramento, California, except for a couple of years in military service. He runs the hardware store that he and his sister inherited from their father. He still carries scars from a one-year marriage that ended in divorce when he discovered his wife was chronically, promiscuously unfaithful, but he’s close to his widowed sister and her two young sons. They fill his need for family, and he enjoys his work. He’s reasonably content with the life he’s created. But one night he’s in the wrong place at the wrong time. He sees a murder and calls the police, letting them know that he can identify the killer. His reward for being a good citizen is having his store burned to the ground and his life and the lives of his sister and nephews endangered. Now he has a new identity; Danson Conner has become Conner Danson. His sister and her boys are sent to safety in one location, and Conner ends up in Virgin River, thanks to a request ADA Ray Maxwell of the Sacramento Office of the District Attorney makes of an old friend and former colleague, Brie Valenzuela. It’s a place to hide until he testifies in the homicide case.

Virgin River has another new arrival as well. Leslie Petruso has spent ten years working for Haggerty Construction in Grant’s Pass. But she needs to get away from her cheating ex who is determined he and Leslie remain good friends. He’s an influential developer, and Leslie finds it impossible to escape contact with him and his newly pregnant wife. When she tells her boss she’s leaving town, he suggests she take the job of office manager with Paul Haggerty’s branch of the family firm in Virgin River.

Neither Conner nor Leslie is interested in a relationship. Both have good reasons for avoiding commitment. But the chemistry between them is strong, and Virgin River is weaving its usual spell of warmth and hospitality. Keeping things light proves to be a difficult task, and soon Conner and Leslie are falling for each other and wondering if their future may lie in Virgin River and with each other. But problems from their pasts must be resolved first.

Hidden Summit is the seventeenth book in Robyn Carr’s Virgin River series. Perhaps unevenness is inevitable in such a long-running series. The town has lost none of its charm, and for fans of the series revisiting familiar places and old friends is a large part of the pleasure offered by new books. In addition to Brie’s role in Conner’s finding sanctuary in Virgin River and the Haggerty connection, Conner rents a cabin  from Luke Riordan and becomes Art’s fishing buddy,  and both he and Leslie make their way to Jack’s Bar where they meet the group Brie terms “the regulars and good friends.”

But however much a reader may enjoy these details, the hero and heroine and their relationship determines the reader’s response to a romance novel. Carr has created some of the most memorable, lovable couples in contemporary romance in this series, but I was never engaged fully engaged by this pair. What happened to Conner was dreadful. I felt sympathy for him, but too often I wanted to reiterate what Brie says to him in their first conversation. She asks him to try to “be pleasant” and then adds, “I don’t need my brother and my close friends wondering why the hell I’d find you a place to live and a job because you’re such an ass.” To be fair, he does indeed become more pleasant and becomes a part of the community, but there were too many moments when he verged on self-pity. I found his sister, whose life has been disrupted in much the same way, a much more appealing character.

Granted that Leslie’s life is not endangered and she is in Virgin River by her choice, I nevertheless found her more likeable because she is prepared to move on with her life. After Conner kisses her the first time, she makes a choice: “And that fast she decided—she was going to enjoy her life rather than subject herself to some kind of torture of denial to avoid ever being hurt again.”  I also applaud the fact that Leslie learns to like herself and her life before she begins to want something permanent with Conner.

“Since I’ve been here, I’ve been liking myself a lot more. I like my little rented house, all the new flowers, my yoga classes, my job in the construction trailer. The crews respect me and do things my way, my boss already needs me. I have a kind of boyfriend . . . who lets me call the shots. I’m getting to know myself, Conner. It’s okay that you don’t feel like marrying me because I don’t feel like marrying anyone. I feel so good being on my own.”

Hidden Summit is not a bad book, but it suffers in comparison to stronger books in the series, books with heroes and heroines that engaged my attention and my affection with no reservations. I’m still a Virgin River fan, still a Robyn Carr fan. I’ll be reading an e-galley of  Redwood Bend (February 28, 2012) this week, and Sunrise Point (April 24, 2012) is a starred book on my TBB calendar. If you too are a Virgin River fan, you will want to read this book. You may find yourself more attuned to the hero than I did. If you haven’t read any of the Virgin River books and like small-town settings, I highly recommend the series, even though my recommendation for this particular book is a qualified one.