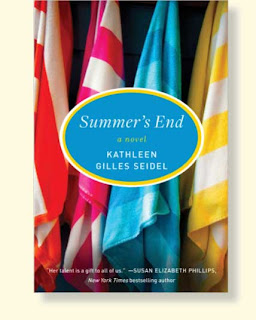 Gwen Wells, a widowed mother of two adult children, and Hal Legend, widowed father of three adult children, meet at a community dinner. Superficially, they have nothing in common. Gwen’s husband was an admiral, and she has spent her life coping when her husband was at sea not only with her family but also with the problems and emergencies of the families of the sailors under her husband’s command. Hal is a music professor, an intellectual with a specialty in folk music. But almost immediately the two feel an affinity for one another, and soon they have fallen in love and plan to marry.

Plans for the families to meet at Gwen and Hal’s wedding fall through, but everyone agrees to spend June at the Legend lakeside camp in northern Minnesota. For the Legends, part of the charm of the place is its remote setting with no cell phone reception, no electricity, and no flush toilet. Their shared summers at the lake are central to how they define themselves as a family. They have established patterns for meals, traditions that control their recreation, and a vocabulary unique to their summer place. From the beginning, the presence of Gwen and her children changes the way things have always been done.

The changes are particularly upsetting to Phoebe, the oldest of the Legend children, who is still grieving for her mother. Phoebe sees her mother, herself, and her teenage daughter Ellie as a continuing line through which the summer traditions are passed, and she struggles with all the alterations that are disrupting the tradition. Ian, the only Legend son has a marriage waiting to unravel and an adopted daughter who has been turned by her indulgent mother into a self-centered brat lacking basic courtesy and human compassion.  Amy, the youngest of Hal’s children, is a figure skater and Olympic gold medalist whose wildly successful career does nothing to make her feel more comfortable with her family. Younger than Phoebe and Ian who were teenagers when she was still a small child and without the intellectual interests shared by the rest of the family, she has always thought of herself as “Amy the Afterthought.” Professionally she is smart and competent, but with her family, she is still the bumbling little sister. Phoebe’s husband and three younger children and Ian’s wife and two younger children round out the Legend family.


Holly, Gwen’s daughter is a successful attorney with a major New York firm who is leery of a place that requires her to function without a hot shower, a hair dryer, and a fax machine. Her brother Jack is a devoted son and brother, a problem solver with great construction skills, and a wonder at establishing new businesses which he grows bored with as soon as they become successful. He is also kind, intuitive, and practical. Accompanying Holly and Jack is Nick, their teenage cousin, troubled by a missing father, an ineffective mother, and a friend who committed suicide.


As the dynamics of the blended family play out with conflicts overt and covert, with misunderstandings and new understanding, with acts of kindness and at least one act of malice, Jack and Amy fall in love. From an almost instinctual understanding of one another to a growing attraction to open admissions of love, their relationship develops. Jack is convinced all along that his and Amy’s relationship will jeopardize the delicate balance between the two families. Amy is reluctant to agree, but when her sister and Jack’s mother are clearly upset by their romance, their reactions support Jack’s view. Amy comes to understand that Jack is right about their love for one another not changing their circumstances. She realizes that it is she who must change, and change she does, maturing, finding her place within the family, and discovering how she can have the life she wants.


Kathleen Gilles Seidel is one of my favorite writers. She creates characters whose behavior is always exactly what it should be in terms of the person she has revealed them to be. The family Gwen and Hal create through their marriage numbers fifteen, sixteen counting Nick who becomes very much a part of the family. Seidel brings them all to life--from Hal, a low key intellectual who believes his adult children are entitled to lives with his support but without his interference, to toddler Thomas, who doesn’t like his food cut too fine and giggles when his tummy is tickled.


The romance belongs to Amy and Jack and, to a lesser extent, Gwen and Hal. Gwen and Hal are good, decent people, who find unexpected happiness together. Their marriage is satisfying in ways that neither of their first marriages was, and yet Seidel shows us that both of them were happy in those first marriages; they loved John and Eleanor and grieved their loss. They are good parents. They worry about their children but recognize the days of parental fix-its have ended. Hal is a loving grandfather, and Gwen is delighted with the chance at that new role. Her scenes with baby Thomas were particularly endearing.


Amy and Jack’s relationship supplies the more conventional romance, conventional at least in their youth and in their journey to the HEA. Neither is conventional heroine/hero material. Amy is dedicated to her career. She loves the skating itself, but she also loves the disciplined world of a professional skater, the creation of the routines, the clothes, and the perks of fame and wealth. I found the latter quite refreshing. The changes in her are organic, and we understand her gradual awareness of how important it is to her to be not just her best as a skater but also her best as a daughter, a sister, an aunt. I loved that her love for Jack and the sex they enjoyed were reflected in a new physical awareness and greater sensuality in her skating routines.


Jack is a wonderful hero, all guy in his determination to fix things, whether the problem be a sauna that needs repairing or a young cousin who needs a friend. His love for his mother and sister and the baggage he carries because he thinks he disappointed his father are integral parts of who he is. He is a doer rather than a talker, and yet his words can be powerful and moving. He tells Amy as he leaves her, “Just remember—every time you put on your skates, every time you open a door and all sorts of cameras go off, just remember that you are loved.”


In addition to the romances, Seidel gives her readers a look at two marriages. The look at Ian’s marriage to Joyce is less intimate, but the reader sees enough to be aware of Joyce’s insecurities, enough to understand her choices even when finding them deplorable, and enough to hope Ian and his two young children find happiness. Because the reader has access to Phoebe’s thoughts, the view of her marriage is more revealing. It is a solid marriage between two people who know and respect one another, who care about one another’s needs, who are still stirred to passion for one another after more than fourteen years of marriage. Phoebe’s husband, Giles, with his quiet strength and concern for others is one of my favorite characters in the story.


World building is not a word that is used often in talking about contemporaries, but it is a skill at which Seidel excels. She creates a world—full, rich, and varied. Her fabric is not history or fantasy but rather reality as ordinary, and as extraordinary, as the reality the reader inhabits daily. I finish a Seidel book with a sigh of pleasure for the world I have visited for a few hours, and then I turn with fresh appreciation for the intricacies and revelations of my own world. If you require adventure and sizzle to love a book, <i>Summer’s End</i> is not a book for you. But if you appreciate characters so real you can imagine having lunch with them, a story that will engage your head and your heart, and prose pitch perfect in every syllable, I highly recommend this book--or any other book that carries the name Kathleen Gilles Seidel.