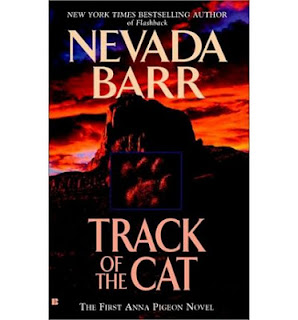 Sheesh, I need a new title generator! This one scrapes the bottom of the (bird) barrel!

It's Christmas Eve. What better time to talk about murder and mayhem in the wilderness? Nothing like a bit of blood on the holly!

One of the things I love about social media is that it's a great way to discover new writers you had no idea existed. On one of my Romance Dish reviews this year, lovely Cara Elliott visited to comment and mentioned that she loved Nevada Barr's Anna Pigeon mysteries (hence the rather corny, pun intended, title for this review). 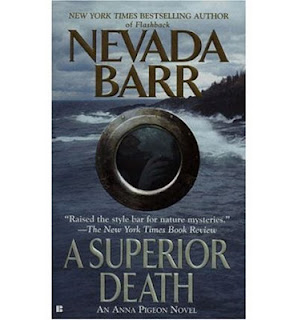 The books sounded interesting so I bought the first one and I've been hooked ever since. I'm eking out the last few of the series right now, having just finished number ten, HUNTING SEASON. I've got eleven and twelve sitting on the Christmas TBR pile and I'm itching to get to them. Then there's five more to go. Don't you love it when you discover a great new author and she's got a backlist up to the wazoo?

Anna Pigeon is a ranger/law enforcement officer in various national parks in the U.S. She's a fascinating character - a middle-aged widow with sharp intelligence and humor and tenacity, and a stubborn courage that stands her in good stead through her various perils. She's also tetchy, opinionated and a little too fond of the vino. She has her own sense of justice which isn't necessarily the justice enshrined in the law. 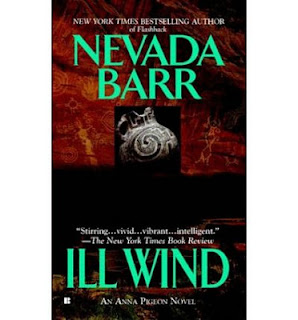 While the books aren't really romances, it's interesting watching the prickly Anna develop close relationships through each story. When the series starts with TRACK OF THE CAT (1993), Anna's still the walking wounded after losing her beloved husband years earlier to a hit and run accident in New York City.

She seeks refuge in the wilderness and eventually decides to make her career in the national parks. One of the joys of the series is watching Anna come to terms with her devastating grief and establish a rewarding and purposeful life in beautiful, isolated parts of America.

Through the earlier books, there are a couple of abortive romances, the most serious with the man who eventually marries her sister Molly, Frederick the Fed (subsidiary characters are a huge part of the fun). Then in book eight, DEEP SOUTH, Anna falls in love with the charismatic and intriguing sheriff Paul Davidson. It's interesting watching that relationship develop through the succeeding books. 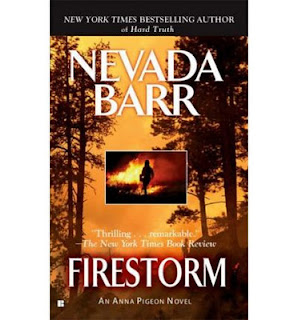 Apart from Anna herself, the principal joy of this series is the exquisite writing about the national parks where Anna works. Nevada Barr knows whereof she speaks. She has worked as a park ranger herself, often in the locations she describes so lovingly in her books.

TRACK OF THE CAT, the first book, is set in the Guadeloupe Mountains in Texas. You can almost taste the dry, fragrant air of the deserts and there are beautiful scenes with the local wildlife, including the magnificent cougars whose poaching forms the basis for the plot.

In A SUPERIOR DEATH, Anna is on a summer placement on Lake Superior. Brrr! That water sounds cold, even in the middle of a hot day! Some extremely creepy and atmospheric descriptions of diving in the lake as Anna sets out to solve a murder in the company of Frederick Stanton (aka Frederick the Fed). 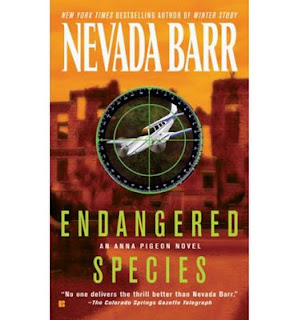 In ILL WIND, Anna takes up a permanent position at the Mesa Verde National Park in Colorado, site of the mysterious and fascinating Anastazi ruins. When murder disturbs old ghosts, Anna begins an investigation that will take her into danger and adventure.

FIRESTORM is one of my favorites in the series. Wildfires devastate the Rockies and Anna finds herself trapped behind the blaze with a small band of firefighters. But not all the deaths can be put down to the natural disaster and she realizes one of the survivors is a murderer. The suspense in this one will keep you up way into the night (sure did with me!).

ENDANGERED SPECIES has a really unusual setting, a place I didn't even know existed. At the height of summer, Anna is seconded to Cumberland Island National Seashore off the coast of Georgia. Wow, what a fascinating place - crumbling holiday mansions of the rich and famous, lush vegetation, lovely beaches and, of course, murder! 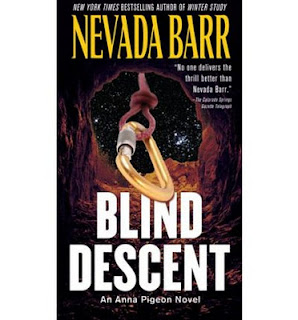 I then took a short break from the series (I'd basically gobbled those first five up like chocolate and I became fonder and fonder of Anna with every new story). Nothing to do with the books, more to do with my cave phobia. I had a panic attack once in the Jenolan Caves outside Sydney and the idea of being trapped in the bowels of the earth with a murderer (the premise of BLIND DESCENT) really creeped me out.

Eventually I manned up and read this one. Again, brilliant suspense and Nevada Barr makes you feel every cold, clammy, dark, creepy inch of the unexplored cave that forms part of the Carslbad Caverns system in New Mexico. Still didn't make me want to take up spielunking!

There are seventeen books in the series. I look foward to reading them all (especially if they all take place above ground!). I highly recommend these stories - I find them absolutely addictive.

So have you read the Anna Pigeon mysteries? Who is the most intrepid heroine you can think of? And do you find caves creepy too?

This is my last review for the year. I'd like to take this opportunity to wish you all a very happy Holiday Season and all the best for 2012. Thank you to the wonderful Dishes who invite me to play every month and to everyone who swung by to keep the conversation buzzing along here. Looking forward to talking great books with you again next year! In the meantime, happy reading!
Posted by Anna Campbell at 12:02 AM