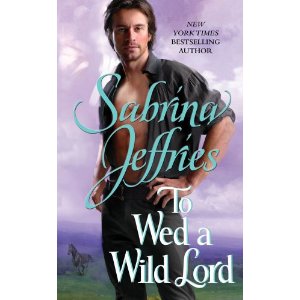 Hetty Plumtree is determined to see her five grandchildren married within a year. Knowing their reluctance to find a mate and settle down, she has threatened them all with disinheritance as a means of pushing them into matrimony. She has been successful with Oliver (The Truth About Lord Stoneville), Jarret (A Hellion in Her Bed), and Minerva (How To Woo a Reluctant Lady). Now it’s Gabriel’s turn.

Nearly seven years ago, Gabriel’s friend Roger Waverly died in a horse race with Gabriel. Since then, Gabriel has intensified the flirtation with death that dates back to his childhood. So daring is his dalliance with this reaper, a dalliance that always leaves Gabriel a breath away from mortality, that he has acquired the name the “Angel of Death.” But the combination of his guilt over his friend’s death, concern about his friend’s sister who will be left destitute when her grandfather dies, and worry over what will happen to his sharpshooter sister Celia if she persists in her determination never to wed prompt his decision to marry. And his chosen bride is Virginia Waverly.

Virginia Waverly has no interest in wedding this wild lord. She blames Lord Gabriel Sharpe for her brother’s death. She has already challenged him to a race on the same course where her brother perished. If she can win a race against Gabriel on that course, she believes it will humiliate Gabriel, end his reckless races, and allow her brother to rest in peace. But when they meet at a ball, Gabriel responds with a challenge of his own. He’ll race her on another course. If she wins that race, he’ll agree to race her on the infamous “thread the needle” course. If he wins their first race, she will agree to allow him to court her.

Sabrina Jeffries’s greatest gift as a writer is creating characters who come alive for the reader. She surpasses herself with Gabriel and Virginia. On the surface, Gabriel is a wild, young lord who loves risks and is arrogant enough to think himself invincible. But Gabriel is far more than this conventional pose. He is a man who has suffered great loss at a vulnerable age when he first discovered death was the enemy who always won and determined to fight him anyway. He’s also a man capable of great love for his family and for the woman who can capture his heart. Virginia too is unconventional—intelligent, competent, and capable of sacrifice.

I’m not a big fan of the I-hate-him/I-love-him trope. Too often authors use this theme and the book becomes a senseless seesaw of emotional swings with little attention devoted to character development. Jeffries avoids that trap. The chemistry between Gabriel and Virginia is strong. But more significantly, they develop individually and as a couple. They both grow, and by the end of the story, they know not only one another but themselves better that they did when the story began.

One of my favorite scenes occurs when Gabriel’s words reveal his understanding of who Virginia is and all she does:

“Who wouldn’t want to make you happy?” he choked out. “You… well, you make them all somehow… find the strength to be better than they are.” She did that to him as well, but he’d swallow gunpowder before he’d admit it. “You make do with the staff you have and you do it brilliantly. Devonmont doesn’t see that or care. He’s used to having everything work out as it should, so he doesn’t notice that what goes on in this house is your doing.”

I’ve eagerly followed the Hellions of Halstead Hall since the first book, and while I think this fourth book can be read as a standalone, I think it is a much more rewarding read for those who know the siblings’ stories and have followed through successive books the unraveling of the mystery surrounding the deaths of their parents. A Lady Never Surrenders, the story of Celia Sharpe and the fascinating Bow Street runner Jackson Pinter—and the conclusion to the mystery, is scheduled for release January 24, 2012. I have it starred on my book calendar, my shorthand for reminding myself that this is another must-not-miss Sabrina Jeffries book.