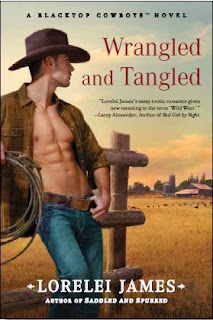 
Wrangled and Tangled is two love stories in one novel. While in most cases it is difficult to have two couples be the star of one book, Ms. James does a fantastic job of keeping the reader interested in both couples.

Janie Fitzbugh and Abe Lawson married at an early age. Instead of growing together, the two grew apart. Janie’s hopes for her marriage were not the reality of their day to day life, so she packed up her stuff and left Muddy Gap, Wyoming. Eight years later, Janie has returned to the rural town to work in the new resort. When Abe and Janie see each other again, the sparks begin to fly and before long those warm, tender feelings resurface. Abe’s love for Janie never diminished over the years of her absence and now that Janie is back in town, Abe is hoping to convince her they need to be a lifetime couple only this time Abe is going to be tell her exactly what he wants … especially in the bedroom.

Renner Jackson has opened his own ranch and resort in Muddy Gap. As a part of his deal with an investor, Renner has agreed to have an onsite representative of the investor though Renner never thought it would be the rich investor’s daughter. Tierney Pratt has had it with her all-business father. After dear daddy passed Tierney over for a huge promotion, she took an on-site representative job to get away from Chicago and her father. But when rough and tough Renner goes head to head with accountant pencil pusher Tierney, their first meeting is not good. But as we all know, there is a fine line between love and hate and these two dance across that line quite well. I think the passion between these two is smokin’ hot. There is one scene with a desk, a chair, and an unwanted guest that will surprise you … in a good way.

If you are looking for a few hours of escape and would like to spend it with some sexy Montana cowboys, then this book is just for you! 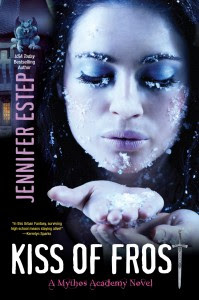 
At Mythos Academy, teen warriors in the making train to take up their roles protecting humankind. With her snarky, self-deprecating voice and strange gift of psychometry – the ability to know an object’s history just by touching it – Gwen Frost is an outsider both to the students of the Academy and the rest of the world. But now that she’s taking private tutoring with the Academy’s most notorious young Spartan, and has Nike’s own sword to protect her, she’s ready to make her mark…


Kiss of Frost picks up shortly after where Touch of Frost (Book 1) left off. (Read my review here if you need a little backstory). Gwen still feels incredibly out of place at Mythos Academy, amongst the pampered, rich teen warriors. She's just that "Gypsy girl" without any super cool strength and speed like the Spartans, Amazons, Valkyries, and Vikings that populate Mythos Academy. Talk about feeling awkward! Add to that the fact that she's crushing on Logan Quinn, the dark and sexy Spartan who's is training her in combat skills, and that she's the target of every Reaper of Chaos---Gwen has more angst and stress than your average teen.

The whole school is headed up in the mountains for Winter Carnival, a weekend of skiing, fun, frolic, and serious partying. Gwen really doesn't want to go, but her best friend (and Valkyrie), Daphne convinces her to go. Maybe a few days away from Mythos is a good idea. Surely the Reapers won't bother to follow her. Not only is someone still trying to kill Gwen, but there's also a killer Fenrir wolf all too eager to make her his afternoon snack. Even the very hunky new boy, Preston, that she meets can't make her forget all that. Looks like it's time to put her new fighting skills to the test. But will Gwen emerge the victor or die trying?

Jennifer Estep has created a world full of myth, action, a little romance, a lot of raging hormones. Gwen Frost is someone most of can relate to. Who hasn't felt a little awkward at some point during their teen years? But she knows who she is: smart, tough, loyal, and sweetly vulnerable. The Mythos Academy series is great young adult reading, but I'd recommend it for about 14 and up for some of the content. It is best to read the series in order, beginning with Touch of Frost---Jennifer also has a prequel, First Frost---so you can experience Gwen's time at Mythos Academy from day one. Dark Frost, book three in the series, is scheduled for release in June 2012. Young adult books aren't just for the young; I'd recommend them for the rest of us grown ups, too.