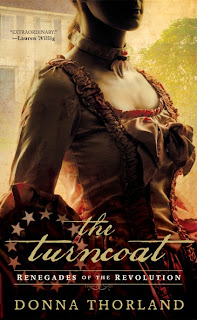 Kate Grey is a sheltered young Quaker woman with no taste for war.  Well educated, she enjoys debating strategy with her father and stays informed of the facts surrounding the fight for freedom but all that is far from her county home...until the night Peter Tremayne and his British troops show up at her front door.  Smitten with the handsome young officer, Kate feels the first stirrings of desire and is on the verge of succumbing to his seduction when a Rebel raiding party sends Peter and his troops back into the night.  Unbeknownst to Kate, "Aunt Angela," a master spy in whose care her father left her when he re-joined Washington's Army, has stolen military plans that Peter was carrying, sending Angela and a reluctant Kate fleeing into the night as well.  Events that follow open Kate's eyes to some harsh realities and by the time they reach General Washington, Kate is ready to offer her services to the cause.

Narrowly escaping a court martial and hanging after the theft of the military dispatches he was carrying, Major Peter Tremayne, Lord Sancreed, returns to Philadelphia after several months with orders to find the woman who betrayed him.  It's the only way he can redeem himself with his British superiors.  He never named Kate while being interrogated, focusing instead on Angela even though he believes both women guilty.    Still, he's sickened by the idea that he could be the cause of either woman being captured, almost undoubtedly tortured and ultimately hanged, especially Kate, the young woman who still lingers in his mind.  At least she is safe on her father's country farm.  Or so he thinks.  When he attends a ball given by General Howe, he's shocked to come face to face with Lydia Dare, a glamorous, sophisticated woman who is engaged to his cruel cousin; a woman Peter knows as sweet, unassuming Kate Grey.

Thorland has captured a tumultuous time in the history of the United States when ordinary citizens risked their safety, their reputations, their very lives by spying for the Rebels in America's fight for independence.   By the time Peter returns to Philadelphia, Kate has been trained, socially polished and is firmly entrenched as one of General Washington's most effective spies.  The initial attraction between them remains and feelings grow as they spend time in each other's company yet they remain firmly on opposite sides of the war with duty and desire battling for supremacy. It's a dangerous game they play, both politically and privately, with high stakes and the potential for deadly consequences around every corner.

I'm fascinated by this period in my country's history.  In my opinion, there aren't nearly enough books set during the American Revolution. Thorland has created a fascinating heroine who, while not a real person, is based on female spies who were instrumental in gathering information for the American side during the Revolution.  Kate, who at first seems a straight-forward, intelligent but naive young woman, is slowly revealed to be a complex, extraordinary patriot who gives her all for her country, at times with devastating consequences.  While there is definitely a romance and an eventual happy ending, it's Kate who kept me riveted to the pages rather than the couple of Kate and Peter.  The actions of the villains are true to time and place and Thorland, to her credit, presents realistic (though sometimes difficult to read) scenes rather than a modern, sanitized version of events.  Thorland also skillfully weaves her main fictional characters with real people (George Washington, Alexander Hamilton, British spymaster John André and more) and a richly detailed secondary cast to bring us a fast-paced story filled with historically accurate intrigue, betrayal and heart-stopping suspense.

I received a copy of The Turncoat from NAL in exchange for an honest review.  One person leaving a comment will be randomly chosen to receive that copy.

Do you enjoy books set during the American Revolution?  In what location / period of time would you like to see more romances set?