Guest Review - - How to Tame Your Duke 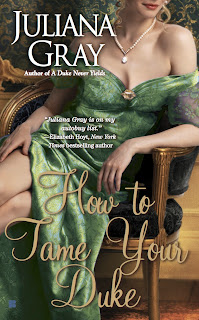 When the king of Holstein-Schweinwald-Huhnhof, a tiny German principality, and his son-in-law, husband of the king’s oldest daughter, are killed by anarchist assassins, the king’s three daughters escape to England where their maternal uncle, the powerful Duke of Olympia, already has plans in motion for their protection. Since Crown Princess Luisa barely evaded a kidnapping attempt, the princesses and their uncle are fully aware that the lives of all heirs to the Holstein-Schweinwald-Huhnhof throne are at risk. The duke’s plan is for each princess to be sent under an assumed identity into a private household where she will be safe until the anarchists are identified and the threat extinguished.  How to Tame Your Duke is the story of the middle princess. Intelligent and scholarly, Princess Emilie, disguised as Tobias Grimsby, enters the household of the Duke of Ashland as tutor to his only son, Frederick.

Emilie’s fist sight of the Duke of Ashland leaves her almost breathless. He seems godlike in profile, “inhumanly perfect,” until she sees that the right side of his face is horribly disfigured by scars, with a closed eyelid where an eye should be and a stump where his right hand should be. Rather than being repulsed by Ashland’s physical imperfections, Emilie is drawn to him—to his powerful body, his rich, dark voice, the very presence of him.

Before his company was sent to India, Lieutenant the Honorable Anthony Russell enjoyed life with his beautiful wife and infant son, with no expectations of inheriting a dukedom. He returned to England a different man, physically and psychically changed in irremediable ways by war and torture. Even the title that became his due to the untimely deaths of the two cousins who had stood between him and the dukedom was not enough to keep the beautiful, faithless Isabelle at his side. She fled with her lover, leaving Ashland with a four-year-old son and an inclination toward reclusiveness that grew more entrenched after her departure. For twelve years, he has rarely left his isolated Yorkshire estate, limiting his social contacts and habitually wearing a mask that hides his scarred face from curious eyes. Soon his son Frederick will depart for Oxford, and Ashland will be more alone than ever.

Emilie takes advantage of Grimsby’s day off to exchange masculine attire for feminine clothing and keep an appointment for tea with her former governess Miss Dinglesby (disguised as Mr. Dinglesby). The purpose of the visit is to bring Emilie word of her sisters’ safety and to send messages to them. When she hears Ashland’s voice just as her meeting has ended, she loses her way in her effort to avoid him. She is mistaken for the woman replacing the one who meets Ashland at the hotel each month for a private, intimate engagement. Emilie allows herself to be conducted to Ashland’s room, planning to explain the error, but once there, torn between fear and fascination, she stays. And she returns for more of the strangely seductive encounters with Ashland during which their erotic but unconsummated affair grows ever more fervent.
The sexual tension and the emotional connection between Emilie and Ashland increases, but can Ashland forgive Emilie’s double deception? His visit to London adds a surprising twist to the situation, and the anarchist group responsible for the death of Emilie’s father attacks Emilie in Yorkshire, adding immediate danger to the existing complexities. It will take the strategizing of two powerful dukes, Emilie’s own courage, and a love stronger than anger or fear to provide a happy ending.

Juliana Gray sets her new series in the same world as her Affairs in Moonlight trilogy with the aptly named Duke of Olympia and other minor characters linking the two series. How to Tame Your Duke combines history, politics, wit, and sensuality with a certain fairy tale element and a touch of the Gothic to create a book that is fun, sexy, and engaging. Gray’s range is wide, moving from physical comedy to emotionally complex relationships to love scenes that are both sensuous and sensual.

Emilie is an appealing heroine. A middle child who never felt that she met her father’s expectations, Emilie found solace in her books and secretly longed for adventure. Catapulted into adventure by political events that destroyed her familiar world, she finds it challenging to adjust to a world without her beloved sisters and without the privileges she has taken for granted. She recognizes that the events that brought danger into her protected world also gave her freedom she would never have known otherwise.

Ashland is a man who has endured unimaginable physical pain that left him permanently scarred and maimed and an emotional wound no less transforming. His sense of honor, revealed dramatically in his ambiguous fidelity to the wife who abandoned him and more tellingly in his acceptance of a daughter who is not his, is central to who he is. When his need for Emily grows so great that he compromises that honor, he confirms her power over him. He awakens Emilie sexually, and she restores him to the life of risks and potential that is available only to those who give their hearts.

The secondary characters are almost as memorable as Emilie and Ashland. Freddie is a delight, an endearing mix of intelligence, attitude and vulnerability, and the enigmatic Miss Dinglesby and the Machiavellian Olympia add interest to the story. Luisa makes only a slight impression, but the impulsive Stefanie has decided appeal. Her story, How to Master Your Marquis, is next. I look forward to it.