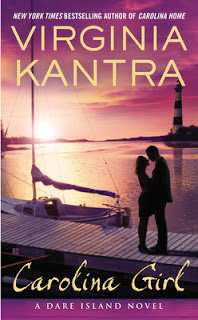 Meg Fletcher couldn't leave Dare Island fast enough.  Determined to follow her dreams, she headed off to college at Harvard then on to New York City, never looking back at what she'd left behind. At the age of thirty-four, Meg has everything she's always wanted:  an important corporate position, an expensive NYC condo and a relationship with a high-powered, live-in boyfriend that's more corporate merger than love affair.  When her mother is seriously injured in a car accident, Meg flies home to Dare Island for three weeks, confident that her life in NYC will be waiting for her when she returns.   It isn't. She returns to discover her position at the firm has been eliminated and her boyfriend of six years, who is on the transition team at work but didn't fight for her, suggests, with a decided lack of sympathy, that she return to Dare Island to "think things over."

For Sam Grady, the Fletchers have always represented what a family should be. Best friends with Meg's older brother, Matt since they were boys, Sam spent more time at Meg's house than his own. Meg's family represented love, affection and support rather than the succession of increasingly younger step-mothers and a father whom Sam could never please that could be found at his own home.  And then there was Meg, his best friend's younger sister, a girl to whom he was increasingly drawn until one New Year's Eve when Meg and too much drink had Sam giving in to his desires...then running scared.  It's been eighteen years yet Sam is still attracted to her, still has feelings for her, still owes her an apology.

Both Sam and Meg are back on the island to help their respective families.  For Sam, it's his opportunity to finally prove his worth to his demanding father before returning to his company on the mainland.  For Meg, it's a chance to help her family while figuring out the fastest way back to New York.  And, for both of them, it's their time to figure out what's really important, what they really want from life. It's an opportunity to discover reality versus perception; to dig below the surface and discover the person inside, to realize that happiness is there, just beyond their fingertips if only they have the courage to reach for it.

The Fletchers are one of my favorite new fictional families!  I've been anticipating my return visit to Dare Island through the pages of Carolina Girl and I wasn't disappointed.  Virginia Kantra has once again brought us a beautifully written, character-driven story that takes us into the heart of this complex, loving family.  We follow the difficult recovery of Tess, the Fletcher matriarch, the progression of the romance between Matt and Allison (from book one, Carolina Home) and the ongoing battle to retain custody of Taylor, the newly discovered ten-year-old daughter of Meg's brother, Luke, a soldier on assignment in Afghanistan.  We also receive more clues about the secret that causes Taylor's nightmares and a possible peek at Luke's heroine (if my guess is correct).

While the Fletchers and other residents of Dare Island form a rich supporting cast, it's Meg and Sam who hold center stage in this book.  Meg is prickly, opinionated, single-minded and not easy to like at first.  Her goals are seriously skewed, mostly because of her determination to not have a life like her mother's...or what she perceives her mother's life to be.  Sam is charming, sexy and has enough vulnerability lurking below the surface to make me (and probably every woman) fall in love with him.  He's one of the good guys and I couldn't help but want the best for him.  As Meg's eyes are opened to what her life could be as opposed to what it's been, as she softens without losing any of her strength, as she learns what love is supposed to be...well, I couldn't help but cheer for her too.

I highly recommend Carolina Girl as well as the first book in the trilogy, Carolina Home and strongly suggest that the books be read in order.