Guest Review - - You're the One 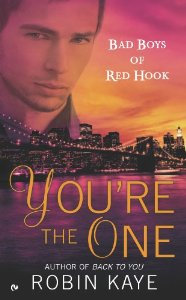 Logan Blaise’s life is just where he wants it to be. He has achieved professional success as a San Francisco vintner, and he’s engaged to Peyton Billingsly, daughter of the owner of Billingsly Vineyards. Papa Billingsly is grooming Logan as his successor. Logan met Peyton when they were both students at Stanford, and neither she nor her family knows anything of his background as one of the Bad Boys of Red Hook. Logan has returned to Red Hook to keep an eye on his foster father, who is recovering from heart surgery, and the family bar, the Crow’s Nest. His brother Storm came halfway round the world when Logan called to tell him Pop needed his help. The least Logan can do is fill in while Storm and his bride Bree are on their honeymoon. Logan is already stressed out over policing the diet and alcohol intake of his stubborn pop and even more stressed about the possibility that Pete’s ten-year-old foster daughter may be Logan’s child. When the chef at the Crow’s Nest leaves suddenly to care for an ill parent, Logan moves from stressed to desperate.

Counting on family tradition established with her four older brothers, Skye Maxwell had expected to be given her own restaurant where she could reign supreme as chef for her thirtieth birthday. Instead, she is named Business Manager of her family’s group of restaurants and told that as a woman, she is unsuited to be a chef. Determined to prove her father and brothers wrong, Skye resigns and leaves San Francisco.  She wants to make it on her own without depending on her family’s wealth or connections. The Help Wanted sign in the window of the Crow’s Nest seems like the answer she’s seeking, especially since Logan’s need to find quickly a replacement chef is too great for him to ask too many awkward questions.

Soon Skye is in command of the kitchen at the Crow’s Nest and of Logan’s heart. Bad boy Logan with his devotion to Pete and his Red Hook roots is very different from the shallow, polished man she thought was Logan Blaise. As for Logan, the man who thought he could not fall in love discovers how wrong he is, but getting rid of his fiancée proves more complicated than he expects. Just at the moment he thinks everything is perfect, Skye disappears. Both Logan and Skye have to be willing to accept their vulnerabilities and trust one another before they can begin an HEA to equal Storm and Bree’s.

Logan’s story is the second in Kaye’s Bad Boys of Red Hook series, following last year’s Back to You. Most of the characters in the first book have a role in the second one, and the dynamics of family and friends keep the story interesting. Logan’s story begins at the wedding of Storm and Bree. Pete is as grumpy and as endearing as ever, Nikki is as funny and needy, and Rocki and Patrice are quick to add Skye to their circle of girlfriends. The chemistry between Logan and Skye is explosive, but the combustibility overpowers the development of their emotional connection. And the misunderstanding that sends Skye back to New York is convenient and predictable.

Readers who enjoyed Back to You will want to read You’re the One to follow the interlinked stories of the sons Pete saved and made his own, but the second book is not as strong as the first one. Nevertheless, a series with an urban setting that still has a rich sense of community is a welcome addition to the contemporary romance scene. The third book in the series, Always and Forever, is scheduled for release in early February 2014. I’ll definitely be among those headed to Red Hook, the Crow’s Nest, and another bad boy’s story then.

Email ThisBlogThis!Share to TwitterShare to FacebookShare to Pinterest
Labels: 3.5 Star Review, Contemporary Romance, Janga, Robin Kaye, You're the One