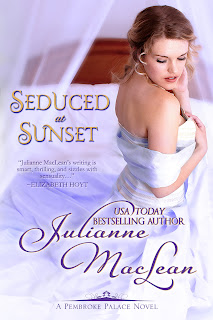 Seduced at Sunset is the conclusion to Julianne MacLean’s beloved series. Fans of the series (myself included) have been waiting to see how things would turn out for Lady Charlotte, the youngest Sinclair sibling and only girl. I’m happy to say it was definitely worth the wait. J


Years ago, Lady Charlotte Sinclair experienced the ultimate tragedy—she lost the love of her life in a terrible accident just weeks before their wedding, and a month later lost their unborn child. She has since given up on experiencing love again, though she hasn’t let that stop her from becoming immensely successful as a writer under the nom de plume Victor Edwards. But just because doesn’t believe she will find love again does not mean her mother can’t. After they arrive in , sets out to help reunite her mother with her first love. While doing so, she is accosted by a thief then rescued by a handsome stranger. gets to know the man, Drake Torrington, a bit and is instantly attracted to him. She is so attracted that she is emboldened to say:


“I would like to see you again, Mr. Torrington. In private.”


His silvery blue gaze dipped lower, to her mouth, them slowly, knowingly lifted back up to her eyes. “For what purpose, Lady Charlotte?”


He was a man of few words, but there was something about him that required very few of them. Something sultry and seductive. Physically powerful.


“You mentioned you were unmarried,” she boldly said. “I, too, am unattached. You are here for the Season. So am Perhaps we could...become better acquainted.”


The corner of his mouth curled up in a small grin that made her knees go all buttery soft. “Do you wish to thank me again?” he asked.


Drake Torrington is used to using his fists, though typically he uses them in a boxing ring. After saving the beautiful lady, he is slightly stunned by her intrepid request but doesn’t hesitate to accept. Drake has lived in for the past twelve years and is only in for a brief time while he settles things with his mother. He sees no harm in indulging in a short-term affair with Lady Charlotte. As the affair progresses, Drake and Charlotte discover that their lives are similar in many ways and wonder if they should take a second chance at love.


Seduced at Sunset is a fast-paced, romantic story and a wonderful end to this series. Charlotte and Drake are two emotionally-wounded characters that you can’t help but root for. I enjoyed watching bloom under Drake’s attention and I fell for him right along with her. I loved the following two passages for two reasons—first, they show how beautiful Julianne MacLean’s writing is, and second, they convey exactly how Charlotte and Drake feel about each other. For :


Oh, how she needed this—this human, physical connection. She had been living such a solitary existence, surrounded only by her books and her family, when what she really needed was a man—a rugged, virile, experienced lover who truly knew how to make love to a woman.

Why should she be so different from other women he had taken to bed?


Perhaps because he had revealed so much of himself in a very short time. It was odd, how she understood everything—his boxing, his grief over losing his wife, his need for privacy from the public. In a way it felt as if she were his mirror image in female form.


Even though this book is part of a series, it stands completely on its own. It is divided into two parts. Part one is short and depicts the whirlwind romance of Adelaide, Charlotte’s mother, and her first love, and part two is Charlotte’s and Drake’s love story. I also enjoyed catching up with the previous couples in the series. If you are a fan of the series or a first-time reader of Ms. MacLean's books, I recommend this historical romance!