Today's Special -- At the Duke's Wedding 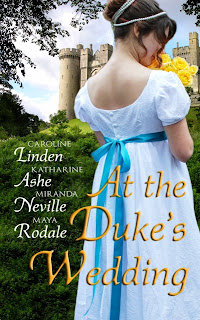 June is considered the month for weddings, so what better way to celebrate that than to have four ladies who write historical romance and are experts at love tell their own wedding stories! Maya Rodale penned the popular Writing Girl Series and makes her home in New York City. Miranda Neville is in the midst of a new series, the Wild Quartet, and lives in beautiful rural Vermont. Caroline Linden's upcoming book, Love and Other Scandals (August), is already garnering rave reviews! Caroline lives with her family near Boston. Katharine Ashe starts a new series in September with the upcoming, I Married the Duke. Katharine resides in the wonderfully warm Southeast. Please welcome Maya, Miranda, Caroline, and Katharine!

Last year the four of us wrote short stories for a free promotion piece (Once Upon a Ballroom) and had a wonderful time. So wonderful that we had to do it again, this time on a larger scale. Brainstorming for a June release, naturally we thought of weddings. One wedding, at an English ducal estate 1813. But with four different heroes and heroines meeting, quarreling and reaching Happy Ever After during a two-week-long house party, ending up with four weddings, none of them expected.


Each of us plotted her own novella, but we came up with a number of common threads and characters that appear in all our stories, notably the White Muslin Crew of Regency girls running wild, the wisecracking Lady Sophronia, and Hippolyta, the world’s greatest high perch phaeton.


And then there was the timeline. Emails flew through cyberspace: “Can we have a cricket match on Day 7?” “Is it OK if your guy and mine meet in the stables on the morning of Day 10?” And gales of virtual laughter as we wrote little scenes for each other’s characters. We hope AT THE DUKE’S WEDDING will bring readers as much pleasure. Descriptions of the four novellas may be found at http://www.atthedukeswedding.com. 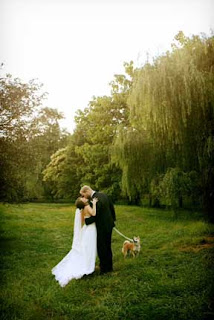 Maya: The bride and groom wore cowboy boots--even though he's a Brit! My sister the bridesmaid, who may or may not be taller than me, was forced to wear flats. But hey, it was my day! My perfect, lovely, totally romantic day. 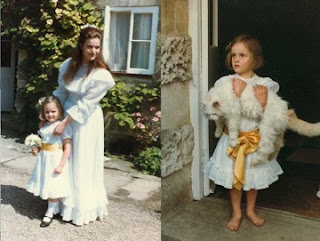 Miranda: I was married in June in the English countryside but not at a ducal mansion. The reception was in the garden of my parents’ house. I wish I could tell you about the food and decorations but the details vanished into a blissful haze. I was attended by my five-year-old niece. As you can see by the “before and after” picture, her toilette deteriorated in the course of the day. The yellow satin sash was one I’d worn as a flower girl at the same age (my mother never threw anything away) and the elderly male cat was named Cleopatra. 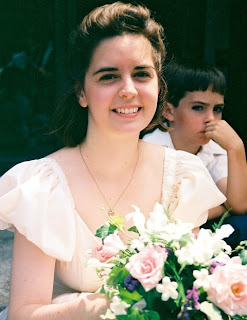 Caroline: Here's a candid photo of me, getting photobombed by an irate junior usher! He was about 6 and wildly annoyed by all the photos being taken, when we could have been doing something much more important like getting to the food. My favorite comment on the ceremony was from my younger sister, who was a flower girl: "It was like going to church, but short and not boring." 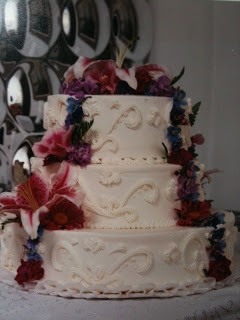 Katharine: Right before we all went off to the church, my parents' house was full of crazily busy people: me and my sisters dressing, the stylist coiffing, the photographer grabbing us all for pictures, caterers running between the kitchen and the tent out back where the reception was to be held, and little nieces and nephews scampering through it all. And it was pouring rain: lovely, wet, steamy June in Pennsylvania.


That's when our French baker called. In a torrent of irate Gallic syllables he lambasted the florist. She had apparently informed him that she would decorate the cake with fresh flowers (as planned) at our house rather than at the bakery where he could supervise. The florist (a truly amazing artist) thought he was a pipsqueak. Fifteen minutes before the ceremony, the baker refused to deliver the cake.


Then someone summoned my husband. Fluent not only in the French language but also in the character of certain Frenchmen, he grasped the phone with confidence.


First he told the baker that his cake was sans doute the most important part of the entire wedding. Then he agreed that the florist's demand was thoroughly outrageous. Finally he promised the baker that should anything happen to the cake other than the greatest artistry, he would hold himself personally accountable and write a condemnation of the florist and a formal apology to the baker.


By the time my husband hung up, he and the baker were best friends. My hero.


The cake was delicious–and beautiful, as you can see in the picture.


I used the baker as the model for the French baker in my novella HOW TO MARRY A HIGHLANDER (coming July 30).


Please share your favorite wedding story, from your own or any other wedding. We have prizes for three commenters: a complete set of Caroline Linden’s Bow Street Agent trilogy (A View to A Kiss, For Your Arms Only, and You Only Love Twice); Miranda Neville’s The Importance of Being Wicked, plus the prequel novella The Second Seduction of a Lady; a digital download of Maya Rodales’s Seducing Mr. Knightly. (We forgot to ask Katharine about a prize before she left on vacation WITH NO INTERNET.) Sorry, US addresses only. 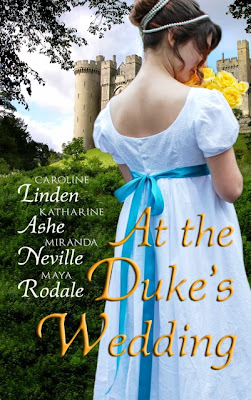 At The Duke's Wedding


As society gathers at Kingstag Castle for the wedding of the year, matrimony is in the air. But who will be the bride? With swoonworthy lords, witty ladies, eccentric relatives, a gaggle of free-spirited girls, not to mention the world’s best high perch phaeton, it’s a recipe for mayhem — and romance. Award winning, best-selling authors Katharine Ashe, Caroline Linden, Miranda Neville and Maya Rodale serve up delectable Regency fun and a sexy contemporary twist in this anthology of original novellas.


Four authors, four couples, four deliciously romantic surprises. When it comes to love, anything can happen…


That Rogue Jack  by Maya Rodale


Jack, Lord Willoughby is charming, handsome, and utterly irresponsible. In other words, he’s the worst person to entrust with the ducal wedding ring. Miss Henrietta Black is prim, proper and the ideal person to help find the priceless family heirloom that’s gone missing… as long as she isn’t distracted by Jack’s gorgeous smile and tantalizing attempts at seduction. They MUST find the ring before the wedding… if they aren’t too busy falling in love.


PS. I Love You  by Miranda Neville


Handsome, inarticulate Frank Newnham asks his cousin Christian's help when he woos Rosanne Lacy by letter. Rosanne falls for Frank's delicious prose, but when they meet in person at the duke's wedding party, Rosanne can't understand why Frank seems so ... dull. And why is she drawn to the dark brooding Earl of Bruton, with his scarred face and air of melancholy?


When I Met My Duchess  by Caroline Linden


Gareth Cavendish, Duke of Wessex, believes he’s chosen the perfect bride… until he meets her sister and lightning strikes—literally! Now he’s the only member of society dreading the wedding of the season. Or is he? Cleo Barrows can’t fathom why her knees weaken every time the handsome duke approaches, or why her sister isn’t in the clouds at the prospect of marrying him. But the more often wedding plans throw Cleo and Gareth intimately together, the faster time is running out to turn the celebration of the summer into the scandal of the year.


How Angela Got Her Rogue Back  by Katharine Ashe


When gorgeous Lord Trenton Ascot beckons to history grad student Angela Cowdrey from the pages of a comic book, she thinks she’s going crazy. When Trent rescues her from a lake and she claims she’s from the future, he knows he is. But a blackmailer is threatening Trent’s family and Angela is determined to help. While unraveling the mystery of her time-travel trip to the duke’s wedding, this modern girl and Regency lord just might discover a passion that defies centuries.