Review - - What the Duke Desires 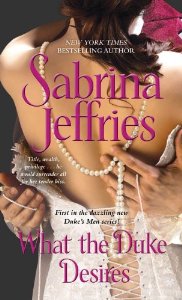 Experience has taught Lisette Bonnaud the inadvisability of depending on a man.  The illegitimate daughter of an English viscount and his French actress mistress, Lisette's papa promises time and again to marry his mistress but never follows through.  He makes a lot of promises to Lisette and her brother, Tristan as well but they never seem to come to fruition either. And when he dies, Lisette's half-brother, George Manton, the viscount's elder legitimate son (readers will remember him as a young bully in Twas the Night After Christmas) makes certain the then fourteen-year-old Lisette and her mother are cast from their home without a penny and puts a price on Tristan's head for taking a thoroughbred horse that was rightfully his.  Only with the help of the younger legitimate son, Dom are Lisette, her mother and her brother, Tristan able to escape to France.

Maximilian Cale, the Duke of Lyons, has known for years that his older brother is dead though many seeking to cash in on the Dukedom over the years have claimed to be the kidnapped heir.  Max is stunned to receive a note from Tristan Bonnaud claiming that he has proof that Peter lives but before he can verify the claim, Tristan disappears and an enraged Max arrives at Dom's home, site of Manton Investigations, demanding to know his whereabouts.  With Dom on a case in Scotland, only Lisette is there to weather the confrontation with the Duke who is sure Tristan is running a scam and determined to see him pay the price for it.  Lisette may be beautiful but she also possesses the same iron will and intelligence as her brothers and is not the least bit impressed with the peer in her foyer.  Though she hasn't heard from her brother in months, she knows without a doubt that he would never try to scam the Duke and isn't about to let the arrogant man ruin the life for which Tristan has worked so hard.  The arrogant, aloof Duke has finally met his match.

Returning to England after her mother's death, Lisette Bonnaud lives with her brother, Dom, managing the office of his company, Manton Investigations but what she really wants is to become one of his agents.  She's smart, capable and certain she can do the job as well as any man.   She's also unconditionally loyal to her brothers, Tristan and Dom.  Tristan has a good life and a good position in France.  She's not about to let an arrogant Duke go haring off in a temper and destroy that.  The only way she'll give him any information about Tristan is if he agrees to let her go with him.  She's certain that, together, they will be able to find her brother and uncover the truth.  She and the Duke pose as an ordinary husband and wife for the journey to Paris; in her mind, a simple and effective solution.  Reality, however, turns out to be far more complex as pesky emotions like desire...and affection...begin to creep in.  They both know that a match between a Duke and the illegitimate daughter of a viscount is doomed.  Lisette isn't about to put herself in another man's control and Max has his own reasons for not offering marriage but sometimes what the head knows, the heart refuses to acknowledge.

Sabrina Jeffries brings us another fast-paced, engaging, historical romance filled with danger, passion and unforgettable characters. Loosely tied to her Hellions of Halstead Hall series, readers of those books will note references to familiar characters such as Jackson Pinter, Gabriel Sharpe and, of course, our hero, the Duke of Lyons.  They will also not be one bit surprised that Lisette's half-brother, George Manton is still a bully, just older, richer and more powerful - not a good combination for Lisette, Tristan and Dom.  This is not a sequel, however, and you do not need to have read those books before reading What the Duke Desires.

I really fell hard for Max.  While there are times I wanted to whack him over the head for his dukely arrogance, he won my heart with his caring and protection of Lisette's honor.  Max also carries some heavy burdens and my heart broke for him as he struggles with his feelings for Lisette, determined to not subject her to the misery and heartache his own mother faced during his father's final days.  He's a complex man who has held himself apart from love and affection and has fears that form a shield around his heart.  It will take a very special woman to tear those walls down and convince him to take a chance on love.

Lisette is one of my favorite Jeffries heroines - smart, strong and independent, with a clear understanding of her place in the world and the touch of vulnerability that comes with that place.  Her insight, caring and willingness to risk her heart regardless of what a future with Max might bring spoke to my heart and her ability to hold her own with her duke and not let his natural arrogance take over, without undermining his masculinity, had me cheering her all the way.

What the Duke Desires is going to my keeper shelf to await the next two books in the series.  Here's hoping that wait won't be too long!