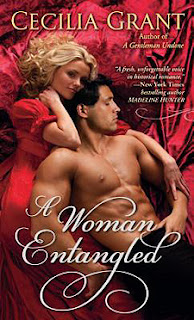 Kate Westbrook knows that she is beautiful, and she intends to use her beauty to see that she marries someone who will give her the life she is entitled to as the granddaughter of an earl. From the time she was thirteen, Kate has been focused on the goal of reclaiming what should be hers. Her father, a younger son, was disowned by his family when he married an actress, whose profession placed her beyond the pale despite her beauty, accomplishments, and virtue. Kate knows that her parents enjoy a happy marriage and that her father, who has found professional success as a barrister, has no regrets about his choices. Her family may be content with their comfortable, middle-class life, but Kate wants more—not just for herself but also for her younger siblings. She even harbors hope that she can be instrumental in reconciling her father and his family and perhaps even see her mother accepted by them.

Nicholas Blackshear, second son of a respectable but untitled gentleman, is also ambitious. He hopes to win a seat in the House of Commons, and he believed he was making progress until a scandal in his family not only made a political career an immensely more difficult goal to attain but also affected his current work as a barrister. Solicitors were reluctant to refer cases to a man whose brother had married a courtesan after a duel with her protector (A Gentleman Undone). His sister, married to her viscount (A Lady Awakened) could ignore society’s strictures and continue her relationship with their unrepentant brother. Nick didn’t have that luxury. He rejects all contact with his brother, but even that is not enough to stop the hemorrhaging of his career.

One of the few bright spots in Nick’s present life is his relationship with the Westbrook family. One of the young barristers Mr. Westbrook befriends and mentors, Nick has been welcomed into the Westbrook home and treated almost as a member of the family. Three years ago, Nick, like many a young man before and after him, was stunned by Kate’s beauty and thought himself in love with her. But when he summoned the courage to tell Kate of his feelings, she made it impossible for him to speak, clearly communicating, without ever directly acknowledging his intentions, that he lacked the qualities she considered essential in her husband. Despite the blow to his pride, Nick accepts his role as family friend and brotherly confidant.

Kate has been working assiduously to win the approbation of Lady Harringdon, wife of her father’s oldest brother and the current earl. When her work finally pays off and she receives an invitation to pay her aunt a call, Kate is elated. Hoping that Lady Harringdon, who has successfully settled her own daughters in appropriate marriages, may be tempted by Kate’s beauty to do the same for her, Kate is dismayed when she learns that her aunt’s idea of help is to find Kate not a husband but work as a lady’s companion.

It is Nick who encourages Kate to turn the balls and card parties she will be attending as part of Lady Harringdon’s training her as a companion into a husband hunt, teasing her that she can surely capture a duke. Kate assures him that she will settle for a duke. Teasing aside, taking Nick’s advice soon brings Kate to the attention of a baron, the same lord who is considering hiring Nick to tutor him in argument and public speaking, a position that could serve as the first step on the political ladder Nick longs to climb. But as Kate’s long cherished plans have their best chance of reaching fruition, she comes to realize her heart is leading her in a different direction.

A Woman Entangled is a quieter, less dramatic book than Grant’s earlier offerings, but it has the same level of complexity, the same layered characterization, and the same rich prose that characterized her first two books. Kate and Nick may be more ordinary than the leads in the other books, but they are complicated, contradictory, flawed characters nonetheless. Kate’s social climbing ambition makes her a less than appealing character at points in the story, but underlying her desire to win acceptance from her father’s family is a conflict addressed by no less than Jane Austen, as Grant indicates with the Austen allusions.

Two passages are central to understanding Kate’s point of view. One comes early in the novel when Kate considers how unalike she and her sister Viola are:

Kate…loved her sister. Indeed she loved her whole family. But was it so unreasonable of her to crave a life in which people valued courtesy, consideration, and etiquette, and recognized that there was more to be thought of, when delivering a letter, than whether the person on the other end could afford to pay the postage? Was it so wrong for her to want to not be nothing to people who shared her name and her blood?
…if she were ever to write a novel, it would be the opposite of a love story. Her hero and heroine would choose duty over their hearts’ desire, that their children need never be taxed for a romantic indulgence that was none of their own.
… A beautiful woman did well to be heartless. And if she hadn’t quite attained the state herself, at least she could make such a show as would convince all the rest of the world.
Kate considers herself a pragmatist. She wants a “good marriage,” one based on sensible, rational choices, rather than a “happy marriage,” one based on feelings. She clearly demonstrates her understanding of the different kinds of marriages in a conversation with Nick.

Kate: “I’ve pinned all my hopes on making a good marriage.”

Nick: “You have stringent ideas of what constitutes a good marriage. Myself I know of no better union than the one to which you owe your existence.”

Kate: “My parents have a happy marriage. That’s not the same.”

If Kate seems shallow, Nick seems hard and unforgiving. He loves his brother Will. He admits that he and the rest of the family lived with fear while Will was risking his life on the battlefield. Yet in self-interest, he cuts Will out of his life in the same way that Westbrook’s family cut him off. But Nick is not a bad man. He is a good man who is forced to make a tough choice and chooses professional and social survival over family feeling. He wounds himself as well as his brother by his choice, and he feels guilty. Both Kate and Nick grow and change as the story moves toward its conclusion, as readers want their heroes and heroines to do. Only imperfect beings are capable of growth.
I would be remiss if I failed to add that Grant uses secondary characters to enrich and expand the world of her novel. The Westbrook family is particularly delightful, especially Viola, a disciple of Mary Wollstonecraft and an aspiring author passionate about her work in progress, an update of Wollstonecraft’s A Vindication of the Rights of Woman. Viola deserves her own story. I also had great admiration for Baron Barclay and Louisa Smith, the aristocratic wallflower who befriends Kate. I’d love to see more of them as well.


Romance fiction is filled with tales of aristocrats who marry outside their class and somehow avoid the usual consequences of that choice. I have delighted in many such stories, quite willingly suspending disbelief. Many of these books are cherished keepers. But I think it’s worth taking note of a novel that shows a more realistic view, including the effects on the generations that follow of marriages that may be happy but may not be “good.” I highly recommend this book. It’s a beautifully written novel, a darn good story, and a different slant on an old trope.