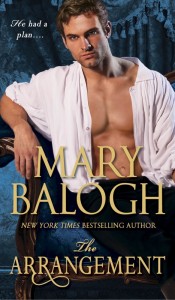 Vincent Hunt returned from fighting Napoleon a changed man with changed circumstances. He is blind, and he has inherited a fortune and a title. Having come through the worst of the trauma from his war wounds, thanks to the help of his closest friends and fellow members of the Survivors’ Club, Vincent is ready to get on with his life as Viscount Darleigh. The problem is the women in his life.

The only son and youngest child of a widowed mother, Vincent is his family’s darling. With the best of intentions, his mother and grandmother, who have given up their own lives to move to Middlebury Park, and his sisters, who visit frequently, do everything within their power to protect Vincent and to relieve him of all decisions. Vincent loves his family, but he is growing weary of their inability to see him as a man who can control his own life, despite his blindness. After three years, his family decides that Vincent needs a wife. Before he can determine how to inform them tactfully that he is not interested in marriage at the age of twenty-three, he finds himself host to all his sisters and their families and to the son of his grandmother’s dearest friend and his family. The latter has three daughters, the eldest of marriageable age. Clearly if Vincent doesn’t act quickly, he will soon find himself married to a bland beauty who insists she “doesn’t mind” his blindness.  Vincent takes quick decisive action. He runs away.

Attended only by his valet, Vincent eventually arrives at Covington House, the modest home where he grew up in genteel poverty, a mischievous boy who was the delight and the bane of the village. He intends for the visit to be a quiet one, but the news of his arrival quickly spreads to every household in the village. The kind-hearted Vincent finds it impossible to refuse the invitations that are heaped upon him, and he soon finds himself in greater danger from scheming parents than the d he fled.

Sophia Fry is a poor relation. Orphaned at fifteen, she has learned to do nothing to call attention to herself. A silent observer to the pride and pretensions of the relatives who have given her room and board but no scrap of affection or respect, Sophia finds her only outlet in the witty caricatures she draws for her own entertainment. With no other resources, Sophia can conceive of nothing other than unending days of continuing as the family mouse, unseen, unheard, and insignificant. Her role changes abruptly when she intervenes to save Vincent from being trapped into a compromising situation by her cousin. Her aunt and uncle refuse to tolerate her interference and cast her out that very night. Sophia is forced to take refuge in the church where the vicar finds her the next morning. When Vincent discovers her plight, he holds himself responsible and proposes a marriage of convenience. Sophia reluctantly agrees.

No reader will be surprised that these two people who seem to have nothing in common turn out to be perfect for each other. Watching them come to know, trust, and love one another is just the kind of developing intimacy that Balogh excels at portraying. One of my favorite scenes is the two of them making up a story together as they travel to London where Vincent plans for them to be wed. Well before they agree that their marriage will not be in-name only, they have talked together, laughed together, and begun to build a friendship. Their chemistry is certainly potent, and Balogh, who was penning sensual scenes when she was still writing in a subgenre that was mostly limited to kisses, shows Sophia and Vincent as partners who fully enjoy the marriage bed. She also shows them as determined to supply what the other needs emotionally. Sophia the mouse becomes Sophia the lioness in seeing that Vincent’s need for independence is met, and she is ingenious in thinking of things that will allow him to reclaim many of the things he loved before his blindness. Vincent, in his turn, fosters Sophia’s awakening self-confidence and encourages her to see herself as part of a family. He also proves himself fully capable of protecting his wife.

I’m a beta lover, and nobody does better beta heroes than Balogh. Vincent is wonderful! Genuinely kind, sensitive, and introspective, he also possesses a quiet strength and confident masculinity. If he seems rather too reluctant to assert himself at times, the reader should remember that he is still quite young and is still adapting to his blindness. His role within his family and among his friends is that of the youngest member who inspires deep affection and a strong sense of protectiveness in others. Also, since he did not grow up expecting to inherit the title, he is unprepared for the responsibilities that come with the title. We don’t hear much about beta heroines, but I see Sophia as a beta too. She is not naturally assertive, and her life has strengthened her natural tendency to avoid conflict and to prefer quieter, more solitary pursuits. But she displays strength when it is needed both before and after her marriage. I liked both Vincent and Sophia as individuals, but even more important for me in a romance novel, I believed they were better, stronger people together.

Readers who enjoyed the first Survivors’ Club book will enjoy seeing Lord and Lady Trentham and other members of the group make brief appearances, but readers who have not read The Proposal will have no difficulty in following events of The Arrangement. I highly recommend this book to readers who appreciate a character-driven romance that keeps the focus on the hero and heroine and their growth as individuals and as a couple. Fans of marriage of convenience stories definitely should add this one to your list. If you have never read Balogh, I suggest you make securing a copy of this book on September 27 a priority. After that, explore her fantastic backlist. As for me, I have never missed a Balogh book. I started with her first book, A Masked Deception, in early 1985, and The Escape, Sir Benedict Harper's story and the third Survivors’ Club novel (which will be released in May 2014) will be my 77th Balogh book (plus 29 novellas, including one paranormal based on my favorite Jane Austen novel). I can’t wait!

Are you a Mary Balogh fan?  Do you remember the first Balogh novel you read?  Do you have a favorite?

As part of this blog tour, one randomly chosen person (U.S. only) who leaves a comment will receive a copy of The Arrangement.

The Arrangement is currently available for Kindle and Nook at only $1.99! Mary Balogh is the New York Times bestselling author of numerous books, including the acclaimed Slightly and Simply novels, the Mistress trilogy, and the five titles in her Huxtable series:  First Comes Marriage, Then Comes Seduction, At Last Comes Love, Seducing an Angel, and A Secret Affair.  A former teacher, she grew up in Wales and now lives in Canada.