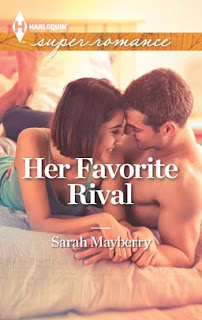 For fourteen years Audrey Mathews has focused on working her way up in the hardware company where she started in the warehouse. Her intelligence, her work ethic, and her ambition have helped her advance to the position of buyer, but a new CEO known as the Executioner has everyone uneasy. Audrey knows that she’s good at her job, but her closest competition and bête noire is also good. He works as hard as she does, and he has the advantage of impressive degrees and to-the-manner-born appearance that she is sure is the result of a privileged background.

Zach Black, known to his female co-workers as “The Man with the Golden Ass,” may look as if he has always belonged to the elite class, but in reality he has worked with incredible single-mindedness and perseverance for most of his life to get where he is. Where he came from is no one’s business but his. Where he is going is the top, and if giving up a life beyond his job is the price, it is one he is prepared to pay.

Both Audrey and Zach are aware of the attraction that simmers between them, but they are equally determined not to act on it. Not only are these two workaholics too focused on the job to have time and energy for a personal relationship but they are also aware of the all the potential evils of an office romance. But when they are assigned a project that requires them to collaborate, they discover the false impressions they had nourished of one another and the reality of a friendship based on common interests, shared humor, and easy conversations. Add this to the attraction that heats up with every meeting, and the combination is irresistible. But when the competition gets down to the wire, will Audrey and Zach be willing to risk the promotion that has been their goal for so long for the sanctuary they have found in one another’s arms?

Once again Sarah Mayberry proves her ability to craft believable contemporary adult characters with emotional baggage, careers that matter, and personalities that are a credible blend of strengths and weaknesses and place them in situations that manage to be both funny and poignant. Audrey and Zach have histories that define “dysfunctional family” in very different ways but which produced high-achieving individuals in both cases. There are no characters who are evil incarnate here, just flawed human beings whose own experiences and weaknesses lead them into bad choices and hurtful actions.

For readers who like their romances with lots of sizzle, Mayberry provides some hot love scenes. More remarkable is that they never seem gratuitous but serve to reveal character and advance the story.  I also really liked the female relationships in this novel. Even Audrey’s relationship with her assistant seemed true and necessary. I found the relationship between Audrey and her sister Leah interesting, and I’m sorry that Mayberry doesn’t show more of its development here or in “Her Favorite Temptation,” the enovella that is Leah’s story (available free at the usual outlets). Audrey’s friendship with her bestie Megan is filled with the kind of teasing and sharing and mutual support that characterizes solid female friendships. One scene where Audrey and Megan meet for drinks after work to talk about what’s going on in the office is enough to make me glad I read the book.

He’s just a man, Megsy. He takes his pants off one leg at a time. He probably has trouble finding the clitoris like every other male on the planet.”
“Honey, Zach knows exactly where the clitoris is. All you have to do is look into his eyes to know that.”

An odd little shiver ran down Audrey’s spine. She knew what Megan was talking about—the knowing, dirty glint in Zach’s eyes that spoke of tangled sheets and roaming hands and healthy earthy curiosity.
“Stop it. I don’t want to think about Zach in relation to my clitoris or any other body part.”
“Ahem.”
The sound came from behind her, and had a distinctly masculine tone. Belatedly she noticed the cool brush of air on the nape of her neck—as though someone had recently entered—and the tide of color rising up Megan’s chest and into her face.
Everything in her went very still. She closed her eyes. “Please tell me Zach isn’t standing behind me.”
Her Favorite Rival may not be quite as blow-me-out-of-the-water good as the best of Sarah Mayberry, but even a Mayberry book that is just good is a reading experience not to be missed. Mayberry is one of the most gifted voices in contemporary romance fiction today. I definitely recommend this book.