Welcome to another edition of the Teen Menu. Beginning this month, I'm starting occasional interviews with young adult authors. First up is the lovely Trinity Faegan, author of the Mephisto series. Some of you may also know Trinity as the real-life Stephanie Feagan. Whatever her persona, she's a cool gal and writes awesome books.

You have written both for the romance market and the YA market. What attracted you to writing for young adults?

Money. They told me I’d become rich and famous. Ha! Okay, seriously? I had this paranormal series I was madly in love with, but something about it wasn’t working. A friend suggested I make the stories with younger characters, and everything clicked. I’m a voracious reader, and after glomming many incredible YA stories, I was certain turning my paranormal romances into young adult novels was the way to go. I’ve never regretted it. I also have not become rich and famous, but I have some dedicated readers, and that’s the most marvelous thing ever!

Tell us about your series.

The Mephisto brothers are the immortal sons of Mephistopheles, the dark angel of death. Their sole purpose is to defeat their oldest brother, Eryx, who lost all light in his soul when he became immortal and now wants to take out Lucifer and abolish free will, dooming humanity. The only chance the brothers have of Heaven is to find and return real, selfless love. As sons of Hell, this is difficult, and they can’t attract any ordinary girl because they’re afraid of them, so the brothers are limited to finding Anabo, people born without Original Sin – and there are almost none in the world. But, of course, there are some, and when each brother finds the Anabo meant for him, he gets a book in the series. So far, there are two books, published by Egmont USA, and the third will be out Sept. 24, published by Pink Publishing–which is me.

Has anything surprised you as you were writing the Mephisto series?

These were meant to be paranormal romances, and they are, but I find them as much a study in humanity as romances. Why would someone pledge their soul to a guy who claims he’ll give them what they want, what they think they need? I didn’t expect to enjoy delving into the psychology of people as much as I have.

What's next for you?

Third in the Mephisto Covenant series, The Mephisto Mark, will be out Sept. 24. This is Phoenix’s story. He’s the brother who first found an Anabo, over one hundred years ago, and lost her when Eryx murdered her. He’s lived with guilt and grief all these years, and when they find Mariah, he’s certain he can’t have her, that he can never love another after what happened. Mariah is severely broken, the product of an abusive guardian and an extremely hard life in Romania. She has zero interest in guys because she doesn’t trust them, is generally afraid of them. The chances of Phoenix and Mariah falling in love are less than slim – but they do. It’s how they get there that makes this book maybe a little difficult to read without some Kleenex handy. I sincerely hope readers enjoy it. I certainly loved writing it.

Thanks for having me here, Trish!

Sounds great, Stephanie. Rest assured I'll be picking up a copy of The Mephisto Mark! Thanks for being my guinea pig...uh, inaugural interview at that the Romance Dish's Teen Menu. 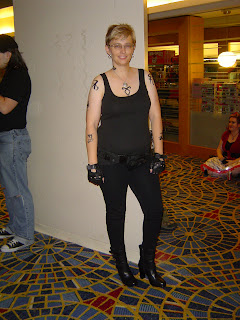 Now, as promised last month, is a photo of me from Dragon*Con dressed as a Shadowhunter from The Mortal Instruments series.

Did anyone see the movie The Mortal Instruments: City of Bones? I did and enjoyed it. As soon as it was over, I wished City of Ashes was already out so I could watch it immediately. Just between you, me and everyone who reads this blog post, I really like Jamie Campbell-Bower as Jace. :)
Posted by Trish Milburn at 2:09 AM