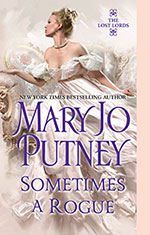 Sarah Clarke-Townsend and her identical twin sister, Mariah, the Duchess of Ashton, slip away for a curricle ride at dawn because the heavily pregnant Mariah is restless and wants to get outside. As the sisters are about to visit an ancient, abandoned church on the Ashton estate, Mariah’s labor begins. Realizing that there is no safe way to get Mariah back to Ralston Abbey, Sarah sends the groom for help and makes her sister as comfortable as possible inside the church. The arrival of a carriage has Sarah checking on the identity of the visitors, and she overhears a group of rough-looking men talking about their plan to kidnap the pregnant duchess. Sarah insists that Mariah hide while Sarah convinces the kidnappers that she is the duchess and the child she has already delivered is with his wet nurse. Sarah knows that the danger that threatens her is very real, especially when she is forced into a dinghy bound for Ireland, but she refuses to give up hope. Confident that her brother-in-law will send rescuers, she speculates about whom he will send.

Rob Carmichael, like Ashton one of the young aristocrats who attended the Westerfield Academy, is on his way from Glasgow to London when he decides on a whim to detour for a visit to Ralston Abbey, knowing that there will be a welcome for him whether Ashton is in residence or not. He arrives to find a chaotic scene. The duchess, obviously in labor, is being transferred from a wagon to a litter so she can be carried inside. Equally obvious is her fear for her sister, and she insists her husband send someone to rescue Sarah immediately. Rob, long estranged from his family, is an experienced, skilled Bow Street Runner. He is the best candidate for the rescue assignment, and since neither Ashton nor Major Alex Randall, whose wife is also pregnant, can accompany him, it’s ideal that he is accustomed to working alone. Hoping that the courage Sarah showed in protecting her sister is indicative of her character, Rob begins his search at the site of the kidnapping.

Rob has good fortune in finding information that helps him track the kidnappers quickly. Frustrated when he arrives shortly after the thugs and their captive have left for Ireland, a site that concerns him because it raises the possibility of a politically motivated kidnapping, Rob hires the fastest craft available and sets off in pursuit. He finds Sarah without too much difficulty, but his clever rescue plan almost turns into disaster until Sarah proves her courage, her competence, and her skill with domestic weapons. An action sequence follows as Rob and Sarah evade the pursuing kidnappers. Just when all seems lost, they are washed up on the Somerset shore, fortuitously near Rob’s family estate where Rob is received with all the warmth of an Arctic blast. But this time, in a surprising turn of Fortuna’s wheel, Rob has all the power, and Sarah is just the person to see that he receives the respect and obedience his new title merits. Rob will soon discover just how much he needs Sarah in his home and in his heart.

Mary Jo Putney has been weaving together action and historical romance for well over two decades. She proves her skill in doing so once again in this fifth book of her Lost Lords series, but this time she pairs the suspenseful action of Rob and Sarah’s literal journey with the quieter metaphoric journey they take once Rob assumes his new responsibilities. In the first part of the book, Rob and Sarah prove their physical courage and ingenuity; in the second part, they prove that they also have the emotional fortitude and tenacity to confront the challenges of ordinary life. Both parts are necessary in order for these characters to become the people they were meant to be. Sarah, whose life before her kidnapping had been peaceful, longed for adventure, and while she discovers that adventure is more frightening than her imagination suggested, she also discovers that she is equal to the task. The reverse is true of Rob. His adult life has been filled with adventures that routinely placed him in danger and tested his endurance and intelligence, but he has been at heart the cat who walked by himself. His new life tests his ability to accept responsibility for the well-being of others and his courage to expose his vulnerabilities.

I’m an unabashed MJP fan. She is one of a select group of writers whose books never fail for me. Sometimes a Rogue will join my other Putney keepers on a packed shelf. I loved these characters, and I loved watching their growth. I loved the complex mix of emotions in this book. I loved the flashes of humor and the poignant moments. I thought Rob was a fascinating character in the other Lost Lords books, and I was not disappointed in his development as the hero here. And I adored Sarah. I said in a recent discussion of heroines that my favorite heroines are those who are strong enough to do what they can do and smart enough to ask for help when they need it, and Sarah is just such a heroine.

One of the things I admire most about Putney is her ability to take romance tropes that have been used—and sometimes abused—in thousands of novels and use them in a way that avoids any trace of the hackneyed. She does this in Rob and Sarah’s story with the kidnapping plot and with the marriage of convenience tale.

Although Sometimes a Rogue is part of a series, it can be read as a standalone. The book most closely connected to this one is the first book in the series, Loving a Lost Lord. It is Mariah and Ashton’s story, and it gives the history of Mariah and Sarah’s separation and reunion. But sufficient details are included in Sometimes a Rogue for a reader new to the series to follow the story without difficulty. If you consider yourself a historical romance reader, you owe it to yourself to read Mary Jo Putney’s books. She is quite simply among the very best. Sometimes a Rogue is a great place to begin, and then you have her incredible backlist to explore. It’s probably redundant to say so at this point, but I give this book my highest recommendation.