Guest Review -- I Married the Duke

I Married the Duke 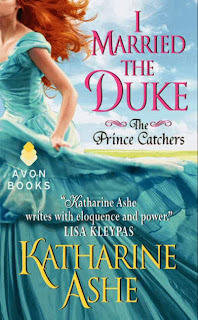 She thought he was a pirate. He thought she was a governess. Two wrongs have never made such a scandalously perfect right.
On the way to marry a prince in a castle a lady should never:
But daring, determined Arabella Caulfield isn’t just any lady. And Luc Westfall is no ordinary shipmaster. He’s the new duke of Lycombe, and to defeat a plot that could destroy his family he must have an heir. Now he knows just the woman for the job . . . and he’s not above seduction to turn this would-be princess into a duchess.


It is actually quite fitting that I review I Married the Duke for The Romance Dish.  It was here at The Dish that I first discovered Katharine and her books when she visited to talk about her debut Swept Away by a Kiss. I was immediately intrigued by the premise of the book, and her passion and enthusiasm.  I am thrilled that things have come full circle in this way.  I Married the Duke is the first book in Katharine’s Prince Catchers series, and it was a delightful and engaging read. Katharine’s passion, joy, and investment in her books and her characters are palpable, and draw in the reader instantly.
Arabella Caulfield is the second of three sisters who were orphaned as young girls with no real knowledge of their past.  Their only clue is a ring. Years ago, the three sisters met a fortune teller who told them one of them would marry the owner of the ring, a prince, and only then would the three sisters know their past and who they truly are. Arabella is determined to fulfill the fortune teller’s prophecy, so she accepts a governess position to the sister of a prince. She and Prince Reiner will fall in love and marry, and all would be revealed. Unfortunately, she runs into an obstacle by the name of Captain Luc Westfall, the captain of the ship that’s taking her to Saint-Nazaire so she can assume her new position.  She finds him rude, arrogant, and maddening. And utterly attractive, compelling, and irresistible. Naturally, her plans to marry the prince are not meant to be.
Arabella is a woman whose experience with men makes her suspicious and wary of them and their motives.  Her beauty has long made her the target of men’s lascivious thoughts and unwanted advances. In addition, her guardian has made her feel her looks was something to be hidden and ashamed of, and maybe even to blame for those thoughts and advances.  Therefore, she has trouble trusting Luc and his intentions.  It leads to many crossed wires and miscommunications between her and Luc because she constantly second guesses his actions and motives. But eventually, she learns to trust him and herself. I liked  Arabella’s kind and caring nature, and admired her strength in facing down her doubts and fears, physically and emotionally, so she could truly give her heart to Luc, fully and openly.  I loved that Arabella comes to Luc’s rescue time and again, both literally and figuratively.
As with all Katharine Ashe heroes, Luc isn’t exactly who he first appears to be.  He is, in fact, the potential heir to the Duke of Lycombe. But due to his troubled past, he’s not anxiously waiting to assume the dukedom. Luc has many demons haunting him, and must make peace with his past in order for him to embrace his future with Arabella.  My heart ached for what he and his brother went through as children, and I thoroughly enjoyed seeing the villain get what’s coming to him, and then some.  I liked that despite Arabella’s initial reaction to him, Luc truly is a man of valor and honor who strives to do the right thing. And I must admit the kerchief covering his eye injury makes him so dashing and even more appealing!
Katharine’s romances are very passionate, sensual, and deeply emotional. I Married the Duke is no exception. The hair washing scene in particular still gives me shivers.  She makes you feel every high and low her heroes and heroines go through on their way to the happy ending, and you can’t help but be swept along on the journey. You get the sense that not only do they want each other, they NEED each other, like the missing piece of the puzzle that makes their lives and joy complete.
I thoroughly enjoyed I Married the Duke, and definitely recommend it. Katharine has said that a book for baby sister Ravenna is already in the works, and I can’t wait to see what happens next in the Prince Catchers series! In the meantime, a Christmas novella featuring Princess Jacqueline and Luc’s cousin, the Earl of Bedwyr, will have to tide us over until then.
~Lisa
https://teatimeromance.wordpress.com/
Posted by Andrea at 12:30 AM