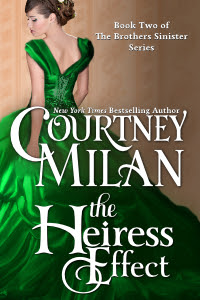 Miss Jane Fairfield can’t do anything right. When she’s in company, she always says the wrong thing—and rather too much of it. No matter how costly they are, her gowns fall on the unfortunate side of fashion. Even her immense dowry can’t save her from being an object of derision.
And that’s precisely what she wants. She’ll do anything, even risk humiliation, if it means she can stay unmarried and keep her sister safe.
Mr. Oliver Marshall has to do everything right. He’s the bastard son of a duke, raised in humble circumstances—and he intends to give voice and power to the common people. If he makes one false step, he’ll never get the chance to accomplish anything. He doesn’t need to come to the rescue of the wrong woman. He certainly doesn’t need to fall in love with her. But there’s something about the lovely, courageous Jane that he can’t resist…even though it could mean the ruin of them both.
I have been a big fan of Courtney Milan ever since I started reading her Turner series. From the beginning, I have been impressed by the sheer talent on display. Her voice is distinctive, and her writing is bold, captivating, and eloquent. With The Heiress Effect, Courtney shows once again why she’s considered a rising star in the romance genre.


Miss Jane Fairfield is the heiress in question in The Heiress Effect. Determined to be a square peg in a society full of round holes, she goes out of her way to do and say the wrong thing at every turn. But there is a method to Jane’s madness. She must remain single and in possession of her fortune until her sister can escape the guardianship of their uncle Titus. Therefore, the last thing she wants is to be tempted by Oliver Marshall. Not only is she risking her heart by falling in love, but her very future, and Emily’s future, could be at stake.
While her abrasive behavior and loud clothing are part of her plan, it reflects who Jane truly is. She is someone who isn’t inclined to fit in, behave “properly” and blend in the woodwork. But despite outward appearances, Courtney shows us that Jane is a smart, caring, capable, and resourceful woman. I admired her strength and fortitude, especially in the face of the overwhelming odds against her. Courtney expertly paints a picture of how hostile 1860s society can be to women, and for Jane to not only endure, but triumph under such conditions is remarkable. It takes a lot of courage and guts to face stand firm in who you are and what you believe in, especially when the rest of society tells you you need to change in order to be accepted. But that is the hallmark of a Courtney Milan novel, which I love-strong heroines who defy social conventions and make their own futures on their own terms. Courtney’s heroines are the driving force of her books, and you always root for them to win, and win big.
Oliver Marshall is a man born on the wrong side of the blanket but is acknowledged by his half-brother, the Duke of Claremont. He lives his life in two worlds, while never feeling like he quite belongs in either world. Oliver is championing a Reform Act that would extend the franchise to people like his father Hugo. Towards that end, his every move and strategy is calculated to help him achieve that goal. Part of the strategy includes finding a proper wife who’ll be an asset to his career and needless to say, Jane doesn’t appear to fit the bill. I admired his ambition, and his desire to enter politics to do good. I also really enjoyed the character arc Courtney plotted for him, where Oliver comes to see the ends don’t always justify the means, and realizes going along to get along isn’t worth being silenced and sacrificing his own morality and integrity.
As you can see, on paper, they are the last thing the other needs. They both consider their growing feelings for each other very inconvenient, but irresistible. I loved the instant connection between them, the way they saw into each other and understood each other right away. Oliver is the first person to crack Jane’s façade, and gets her open up her him. There is nothing as powerful and seductive than feeling understood and knowing you’re not alone, and Courtney cleverly uses it as a basis to let Jane and Oliver let down their guards and trust each other. The relationship between Jane and Oliver is wonderful; there is witty banter, intense emotional stakes, passionate kisses, and steamy love scenes. But most of all, I love the message Courtney imparts in her books: Love is incredibly strong and powerful, and if you find it with the right person, you have strength to face whatever life throws at you, if you do it together. That is certainly the case with Jane and Oliver. Through each other, both Oliver and Jane come to see that what society perceives as their greatest flaws are in fact their strongest assets.
There is lovely secondary romance for Jane’s sister Emily, and Oliver’s sister Frederica “Free” Marshall was a total scene stealer. Oliver and Free’s aunt Freddy also has an inspiring and heartbreaking storyline as well.
I can’t recommend The Heiress Effect highly enough. The characters are complex and fully fleshed out, and the plotting and writing is superb. It is the second book in the series, but stands alone quite well. I can’t wait to see what Courtney has in store for Sebastian and Violet, the hero and heroine of her next book, The Countess Conspiracy!
~Lisa
http://teatimeromance.wordpress.com/
Posted by Andrea at 12:30 AM