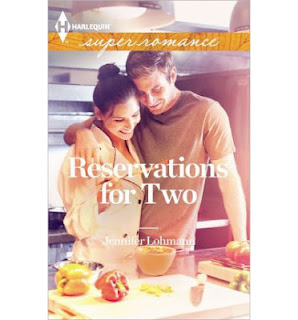 
I love it when I find a fantastic new author (I think we all know that feeling of  discovery!). I had this experience recently when I picked up RESERVATIONS FOR TWO, the debut SuperRomance from Jennifer Lohmann.

Even better, I had met Jennifer back in 2010 at the Orlando Romance Writers of America conference where she received the Librarian of the Year award. Jennifer and I bonded over many glasses of zinfandel and our mutual love of classic romance fiction. At the time I had no idea that this companion in the zinfandel murder conspiracy wanted to write romance as well as recommend it to her library patrons.

You can imagine my surprise when I discovered that Jennifer was taking part, along with a couple of my dear Romance Bandits sisters, Jeanne Adams and Nancy Northcott, in a Lady Jane's salon in Raleigh in March. So I rushed to order her debut romance, RESERVATIONS FOR TWO.

RESERVATIONS FOR TWO introduces the first of the Polish-American Milek sisters, Tilly, who has overcome personal tragedy to start up her own restaurant in her home town Chicago. So much hinges on the restaurant being a success, not least Tilly's need to justify her late grandmother's faith in her, so it's a devastating blow when an all-powerful food critic who operates under a pseudonym delivers a horrible review soon after the launch. Still reeling, Tilly encounters charming Dan Meier and experiences an immediate attraction unlike anything she's ever felt before.

Yep, you're right - Dan is our EVOL food critic. But don't worry, this book is so much more than an extended rap on the big misunderstanding romance trope. Both of these characters have enormous emotional issues standing in the way of their happiness and it's such a buzz watching them conquer their demons one by one until they're ready to stand together and seize their joint future. Yay! 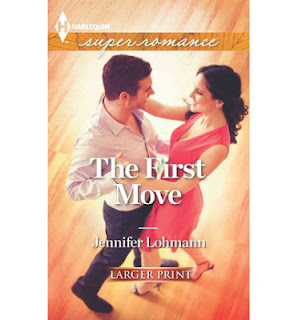 Having finished RESERVATIONS FOR TWO, I immediately ordered THE FIRST MOVE which features Tilly's older sister, the very self-contained Renia Milek. Renia has risen above tragedy and its aftereffects to become a respected photographer in Chicago, but her emotional life remains a complete wasteland. That's the way she likes it - having been hurt so badly in the past, she is reluctant to trust again.

Miles Brislenn had a huge high school crush on Renia but she didn't know he was alive. When these two meet again while Renia is photographing a wedding, sparks immediately fly. Miles sets out patiently and lovingly to mend the broken heart of the girl he's never forgotten. Renia, as you can imagine, isn't exactly a willing participant in this process,but Miles proves irresistible.

In this book, I really liked Renia but I LOVED Miles. He's just such a lovely guy and he knows pretty much from the get-go what he wants. There's something so breathtakingly appealing about a hero willing to go to any length to cherish the woman he loves. Sigh.

Both of these books are great reading and if you're looking for a new voice in contemporary romance, run to your nearest bookseller and grab them. There were a whole stack of things I loved about these stories - the characters act like adults and they're so real, you feel like they could be sitting next to you; the emotional depth; the complexities of the family relationships portrayed (again, very real); the fresh, modern voice. I also loved the cultural detail of Chicago with its various ethnic neighborhoods and rich urban life. It's a city I've always wanted to visit - why doesn't RWA go there for a conference? I'd be the first person to book!

So my verdict on Jennifer Lohmann? Definitely a discovery!

As I said above, I love to find great new authors. Have you recently read any authors new to you who have become your new autobuy? What attracted you to these stories?
Posted by Anna Campbell at 12:00 AM

A DUKE FOR DIANA by Sabrina Jeffries