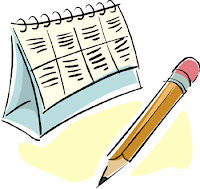 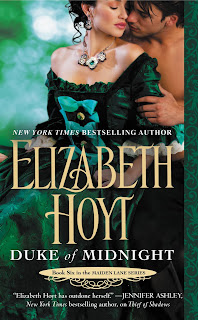 Duke of Midnight
By Elizabeth Hoyt

Twenty years ago Maximus Batten witnessed the brutal murders of his parents. Now the autocratic Duke of Wakefield, he spends his days ruling Parliament. But by night, disguised as the Ghost of St. Giles, he prowls the grim alleys of St. Giles, ever on the hunt for the murderer. One night he finds a fiery woman who meets him toe-to-toe-and won't back down . . .

Artemis Greaves toils as a lady's companion, but hiding beneath the plain brown serge of her dress is the heart of a huntress. When the Ghost of St. Giles rescues her from footpads, she recognizes a kindred spirit-and is intrigued. She's even more intrigued when she realizes who exactly the notorious Ghost is by day . . .

Artemis makes a bold move: she demands that Maximus use his influence to free her imprisoned brother-or she will expose him as the Ghost. But blackmailing a powerful duke isn't without risks. Now that she has the tiger by the tail, can she withstand his ire-or the temptation of his embrace? 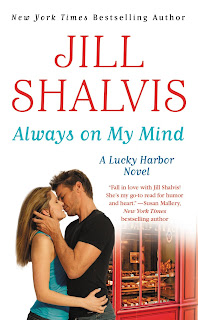 Always on My Mind
By Jill Shalvis

After dropping out of pastry school and messing up her big break on a reality cooking show, Leah Sullivan needs to accomplish something in her life. But when she returns home to Lucky Harbor, she finds herself distracted by her best friend, Jack Harper. In an effort to cheer up Jack's ailing mother, Dee, Leah tells a little fib - that she and Jack are more than just friends. Soon pretending to be hot-and-heavy with this hunky firefighter feels too real to handle . . .

No-strings attachments suit Jack just fine - perfect for keeping the risk of heartbreak away. But as Jack and Leah break every one of their "just friends" rules, he longs to turn their pretend relationship into something permanent. Do best friends know too much about each other to risk falling in love? Or will Jack and Leah discover something new about each other in a little town called Lucky Harbor? 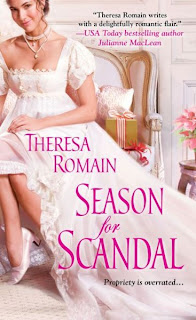 Season for Scandal
By Theresa Romain

Jane Tindall has never had money of her own or exceptional beauty. Her gifts are more subtle: a mind like an abacus, a talent for play-acting—and a daring taste for gambling. But all the daring in the world can't help with the cards fixed against her. And when Edmund Ware, Baron Kirkpatrick, unwittingly spoils her chance to win a fortune, her reputation is ruined too. Or so she thinks, until he suggests a surprising mode of escape: a hasty marriage. To him. On the surface, their wedding would satisfy all the demands of proper society, but as the Yuletide approaches, secrets and scandals turn this proper marriage into a very improper affair. 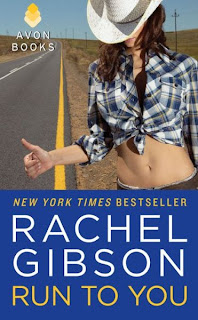 Run to You
By Rachel Gibson


There's nothing like fleeing Miami to ruin a girl's day.


Stella Leon's bartending gig was going fine until gorgeous ex-Marine Beau Junger decked her mob-connected boss, spirited her out of the city, and claimed that Stella's half-sister—the one with the perfect life—sent him. Now Stella has no choice but to go along for the ride . . . and seduce Beau's military-issue socks off . . .


The Marine Corps was Beau's escape from his old man's legacy of naval heroism and serial philandering, but no amount of training could prepare him for the day he looked in the mirror and saw his father staring back. The answer: swear off meaningless sex. Oh, and find a way to make Stella Leon quit being so damn hot . . . 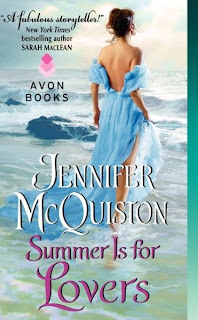 Summer Is for Lovers
By Jennifer McQuiston


His heart is unavailable. Luckily, her interest lies in the rest of him . . .


Though she was just a girl when they first met, Caroline Tolbertson's infatuation with David Cameron remains undimmed. Now fate has brought the handsome Scotsman back to Brighton for what promises to be an unforgettable summer. Soon, Caroline will have to choose a husband, but for now she is free to indulge her curiosity in things of a passionate nature.


That is, if David will agree to teach her.


Past mistakes have convinced David he'll make a terrible husband, though he'll gladly help the unconventional Caroline find a suitor. Unfortunately, she has something more scandalous in mind. As the contenders for her hand begin to line up, her future seems assured . . . provided David can do the honorable thing and let them have her.


When a spirited young woman is determined to break Society's rules, all a gentleman can do is lend a hand . . . or more. 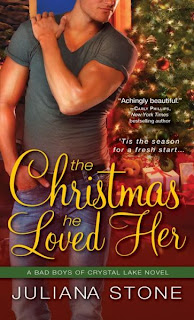 The Christmas He Loved Her
By Juliana Stone


All he wants this Christmas is her...


In the small town of Crystal Lake, Christmas is a time for sledding, hot chocolate, and cozying up to the fire with those you love. For Jake Edwards, it's also time to come home and face the music. He thought there would never be anything harder than losing his brother. Turns out there is: falling in love with his brother's widow, Raine.


Ever since they were little, Jesse was the Edwards brother who was always there for her, and Jake was the one who knew just how to push her buttons. Raine can't imagine a life without them, which is why it was doubly decimating when Jake left town after his brother's sudden death. Now he's back and she doesn't know whether to be mad or thrilled. Maybe both. Or maybe it will be the perfect chance for both of them to finally find happiness again. 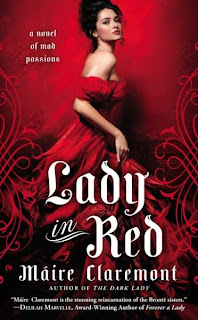 Lady in Red
By Máire Claremont

Lady Mary Darrel should be the envy of London. Instead, all society believes her dead. For Mary holds a secret so dangerous, her father chose to keep her locked away …and have a grave made for her near her mother’s. Driven to the edge of desperation, Mary manages to escape the asylum, only to find that her fate yet again rests in the hands of a man…

Edward Barrons, Duke of Fairleigh, longs for some way to escape the torment of his father’s crimes. In Mary’s warrior spirit and haunted gaze—which so mirrors his own—he finally sees his path to redemption. He will stop at nothing to keep her safe, even as she seeks revenge. But will the passion they discover in each other be enough to save them from their demons? 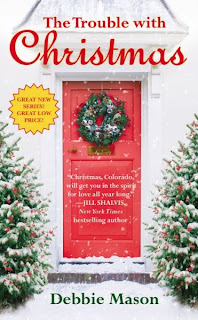 The Trouble with Christmas
By Debbie Mason

Resort developer Madison Lane is about to lose the one thing she loves most in the world - her job. Dubbed "The Grinch Who Killed Christmas," Madison spoiled a deal that would turn quaint Christmas, Colorado, into a tourist's winter wonderland. Now the citizens want her fired but the company gives her one last chance, sending Madison to the small town to restore the holiday cheer.


For Sheriff Gage McBride, no hotshot executive from New York City is going to destroy the dreams of the people he loves. But one look at this beautiful woman and it's his heart that may be broken. In just a few days, Madison causes more trouble than he's had to deal with all year. He can't decide if she's naughty or nice, but one thing is for certain- Christmas will never be the same again... 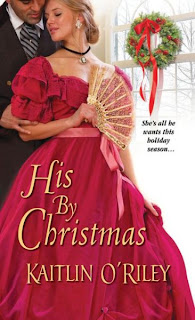 His By Christmas
By Kaitlin O'Riley


Yvette Hamilton knows just what she wants for Christmas—a dazzling marriage. And if marrying the ton's catch at the height of the Yuletide season is how she can prove herself, she'll be the most respectable of the many ladies competing for his hand. But one accomplished rake has other, much more tempting ideas. . .


The illegitimate son of a duke, Lord Jeffrey Eddington knows society will never truly respect him. He thought he'd found acceptance as a friend of the Hamiltons, but Yvette's seeming snobbery makes him wager to win her hand no matter what it takes. Too late, he finds her frivolity conceals an intelligent, appealing woman. Now they face a hard choice between the holiday dreams they think they want most. . .and the very real love they can't resist.