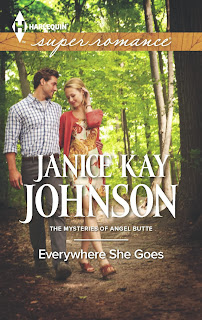 Cait McAllister, a graduate student in urban design and planning, broke up with an abusive boyfriend who refused to accept that she had left him. Frightened by his anger and the physical threat he posed, she applied for a job as community developer in Angel Butte, Oregon, the town where her older brother Colin and his wife, the former Maddie Dubeau, live (Bringing Maddie Home, 2013). Cait was a child when she left Angel Butte with her mother, leaving Colin and their father behind. Despite Colin’s efforts, he and Cait have a distant relationship, but Cait is feeling vulnerable now. A protective big brother who is also a cop seems like a good ally in the circumstances.

Noah Chandler, restaurateur and mayor of Angel Butte, is finding his elective office a bigger headache than he expected. He’s dealing with the fallout of recently revealed corruption in the police department and trying to move his town into the twenty-first century. He is concerned about finding the best people for city positions. Noah knows Cait is trouble from his first glimpse of her. She’s overqualified for the job, and the immediate attraction he feels could be a problem in an employer-employee relationship. He hires her anyway because she promises to be good for the town and because he can’t stop thinking about her. When he discovers she is being stalked and threatened by an ex-boyfriend, Noah becomes even more protective than Colin.

Cait and Noah both have some heavy baggage. Cait, with an abusive father in her past, is ashamed that neither experience nor intelligence kept her from becoming entangled in another abusive relationship. She has sworn off men for the time being. Noah, whose problems with his parents make him believe he is unworthy of being loved, avoids commitment. Yet none of these barriers are enough to prevent the two from becoming lovers. However, their inability to fully trust one another and the antagonism between Noah and Colin, who blames Noah for giving the police chief job Colin expected to be his to an outsider, complicate their relationship. But when Cait’s childhood memories lead to murders, recent and past, keeping her safe takes precedent, especially when it turns out that the threatening ex may not be the one determined to kill her.

Everywhere She Goes is the second book in Johnson’s romantic suspense series set in a town that may be small but, with its drug trafficking, political corruption, and murder, is anything but warm and cozy. Cait and Noah are complex, flawed, richly human characters, and Johnson manages to keep their relationship central to the story while maintaining the tension in the mystery plot. I really liked that Noah is a super sexy hero who is not conventionally good looking. I also found the look at small-town politics interesting.

Although Colin and Nell/Maddie are significant secondary characters in this book, it is not necessary to have read the first book to follow Cait and Noah’s story. I don’t read a great deal of romantic suspense, but I’m a fan of Johnson’s storytelling and characterization. Everywhere She Goes showcases these skills, and it kept me turning pages long after I should have been asleep. If you are a romantic suspense fan, or if you just like compelling stories, I recommend this book.


There are two secondary characters that I found intriguing, Angel Butte’s new police chief, Alex Raynor, and a female cop, Jane Vahalik. Alex’s story, All a Man Is, will be released  March 1, 2014, and Jane’s story will follow in July. I look forward to them. I never miss a JKJ book.