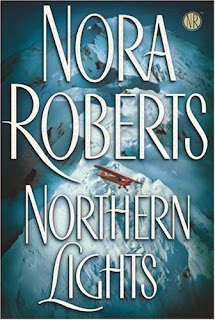 As you may know, 2013 was my year of attacking the TBR pile.

I don't know if this rings a bell with any of you, but I just can't resist buying new books. And the new, bright shiny book that has just arrived in the mail tends to get the attention, which means often very good books drop lower in the pile until sometimes they're so far down, they're subterranean.

I keep my TBR pile in my dressing room which had started to look like it belonged to Imelda Marcos - if Imelda Marcos had a book fetish instead of a shoe one! So for the last 12 months, I've been tugging out books that I've had for ages and giving them a go.

As a result, I've discovered some real gems!

A book that had been there for so long that I'd completely forgotten I had it is NORTHERN LIGHTS by Nora Roberts.

Wow, what a great read! And I was lucky enough to have time to wallow in the story and read it in one gulp. Paradise!

Following the shooting death of his partner, Nate Burke leaves his job as a detective in Baltimore to become chief of police in tiny Lunacy, Alaska, in the middle of winter. Which many people consider an act of...lunacy.

Nate is wounded and grieving and guilt-stricken and perfectly aware that this is his last chance to set his life on the right path. At first, he's sure he's made the wrong decision. For a start, Lunacy in January is COLD!!! Beyond imagining cold. And not everyone in the small settlement welcomes the arrival of an incomer as the representative of the long arm of the law.

But Nate sticks it out and gradually finds himself a place and a new purpose. On the way, he falls in love with independent, eccentric bush pilot Meg Galloway who isn't at all sure that she wants a forever relationship, although she's perfectly happy to enjoy Nate as a lover.

So everything is heading in the right direction for Nate at last when some college students stumble upon a corpse in an ice cave up in the mountains. The dead man is Meg's father, a free spirit who everyone assumed walked out on his family sixteen years ago. Not only that, but it's likely that the murderer was a resident of Lunacy, and perhaps still is.

Nate has to draw on all the skills he learned as a homicide detective to solve this crime (and deal with the subsequent mayhem) in a place where he'd fondly imagined he'd only be dealing with minor issues like small-time theft and inappropriate high-spirits.

This is more of a police procedural than I'm used to from the great Nora although the romance between Meg and Nate is wonderful - and in such a long book (my Piatkus edition is 562 pages long), there's enough room for a secondary romance or two as well! All the characters are so real, from Nate and Meg down through the interesting misfits who have made Lunacy their home over the years. The reader falls in love with the townsfolk right along with Nate.

Having said that, I think the setting was the best part of this book. You can feel the cold and isolation and dramatic beauty of this isolated corner of the world. I think it's no accident of writerly intent that Nate arrives in the depths of winter and moves forward into spring - the setting definitely mirrors the new life burgeoning in Nate's cynical, damaged soul.

I've always wanted to visit Alaska - I'm a girl who loves cold! Reading this marvelous, suspenseful, evocative novel made me look seriously at booking a ticket!

So have you read NORTHERN LIGHTS? Do you have a favorite book by Nora Roberts? Have you been to Alaska?
Posted by Anna Campbell at 12:00 AM