A Rock Star of a Romance! 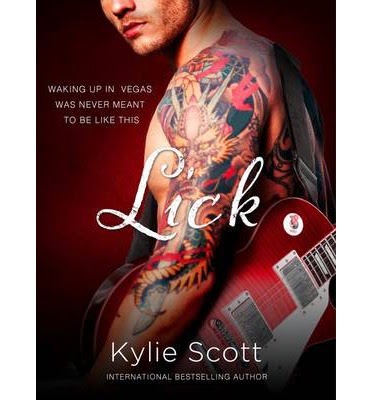 Hey, guess what? It's my birthday! Come and have some cyber cake.

And speaking of yummy things, feast your eyes on that spectacular cover! I wonder if the title LICK is an invitation to do just that!

For the sake of the dear Romance Dishers, I ventured slightly out of my comfort zone this month to review the first new adult romance I've ever read. And I started with a doozy!

Kylie Scott is an Aussie who has taken the world of romance by storm with her Stage Dive series, based around a four-piece west coast rock band called, you guessed it, Stage Dive. These books are selling like hotcakes (hmm, perhaps it's because of the birthday - I seem to be stuck on cake imagery today. Clearly I want to eat my cake and have it too!).  They've hit both the New York Times and USA Today list so Kylie is a major local success story here, as you can imagine.

LICK, book 1 in the series, tells the story of ordinary girl Evelyn Thomas and the sexy, talented guitarist from Stage Dive, David Ferris. It opens in a spectacular fashion with poor Evelyn waking up in a hotel bathroom in Las Vegas with the hangover to end all hangovers, a huge diamond on her finger, and a gorgeous man who is now apparently her husband. Pity she can't remember anything about her 21st birthday celebrations past a line of tequila shots!

The rest of the story details their romance as Evelyn deals with David's rockstar lifestyle and also faces up to a few home truths about herself. One of the lovely things about this romance is that there's an obvious bond between David and Ev right from the start. While the story is told in first person, we see enough of David to understand how falling in love with Ev changes him for the better.

And did I mention there's lots of hot love scenes? All with a really endearing sweet edge. Ev isn't one of the cool chicks and that's one of the things David loves about her, so her reaction to the sensual side of their relationship is believable and very appealing. And David? Well, let's just say he can make sweet music with more than just his guitar!

There's also some charming touches of humor. One of the running jokes I particularly like is that Ev is a diehard country music fan. She's definitely not a Stage Dive groupie!

As you can gather, Ev is very much her own person, although understandable at 21, she's still got a lot to learn. I loved how she stood up for herself, despite being daunted by this dangerous, glamorous, public world that she's been thrust into, thanks to her impulsive marriage. She also has a strong moral compass which both David and I admire. The scenario of rock god falling in love with Miss Ordinary could have been a bit unbelievable, but while this is definitely a wonderful fantasy, you can see why these two compliment each other. He's reached a point where he wants something real amongst all the glittering artifice of his fame. And Ev is definitely real!

If you're a new adult fan, you've probably already read this. If you're not, it's definitely worth picking up to check out the hot new genre on the block, not to mention a chance to get to know two lovely characters (and a bunch of interesting people in the supporting cast). I'm looking forward to going back to the wild and wonderful world of Stage Dive!

So are you a new adult fan? Any recommendations for where I go next? What do you think makes this new genre so very hot right now?
Posted by Anna Campbell at 12:00 AM