Review - - The Duke and the Lady in Red 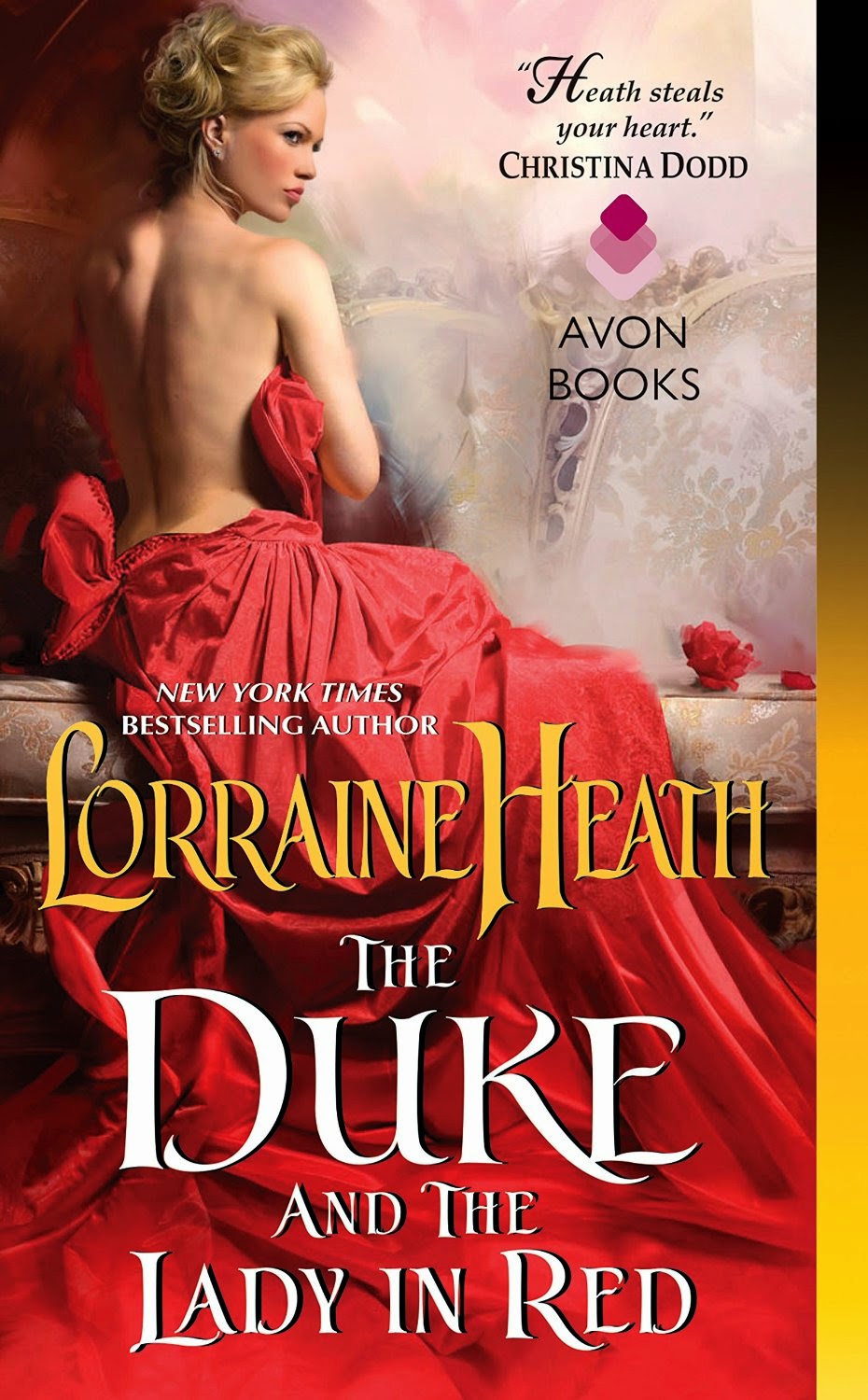 The Duke and the Lady In Red is the first book I’ve read from Lorraine Heath.  The novel starts with the heroine Rose Sharpe sweeping into the Twin Dragons in a stunning attention grabbing red dress, and commanding the room.  She is clearly a woman on a mission. But she is not there to make friends.  Rose is there to case the joint and find her next mark. Fortunately, or unfortunately, she attracts the attention of the Duke of Avendale, and all of her plans get turned upside down.

From the moment the Duke of Avendale first sets eyes on Rosalind Sharpe, he is immediately struck by her, and knows his life will never be the same again. For the first time in his life, Avendale has met a woman who he is irresistibly drawn to, and is determined to make her his. However, when he finds out that he’s become the target of a con, he takes matters into his own hands, and extracts his own payment and retribution.  In exchange for not turning Rose over to the authorities and all the money she wants, she agrees to spend a week in his bed.  While this bargain starts out as a strictly business transaction, it is clear from the beginning that Avendale is emotionally invested in Rose, and can’t get her out of his system, no matter how hard he tries.

For her part, the last thing Rose wants or needs is to be distracted by Avendale.  The fate and welfare of those she cares about most is on her shoulders, and one misstep could mean disaster. However, the more time she spends with Avendale, the more she compelling she finds him, and the deeper she falls for him. Despite Avendale’s claims to be a dissolute rake who cares for no one but himself,  she sees the kindness, compassion, understanding, and honor that is innate in him. It is because she’s privy to seeing the true Avendale that makes Rose yearn to let down her guard and trust him with the truth and every skeleton in her closet, even though the stakes and consequences could be huge.

One of my favorite parts of the book is how deeply Lorraine Heath delved into the emotions of her characters. She describes them so vividly that you feel them along with Avendale and Rose every second.  Both are very isolated and guarded people who have trouble reaching out and trusting others because they have been hurt and disappointed in the past and fear the pain of opening themselves up again.  I loved  seeing their inner struggle play out in their interactions, and how Rose and Avendale come to see the risk of being open and vulnerable is worth it with the right person.

The Duke and the Lady In Red also has a great cast of secondary characters, especially Rose’s brother Harry. Harry is the catalyst of the story, the reason Rose is willing to risk everything.  Rose has assumed the responsibility of Harry’s care from a young age because he was born with a genetic condition that causes tumors to grow all over his body and distort his appearance.  As one can imagine, this turns him into a target of scorn, disgust, and fear and Rose has to shield and protect him.


While The Duke and the Lady in Red is the third book in the Scandalous Gentlemen of St. James series, it can definitely stand alone. Readers need not fear that they’ll be lost if they jump in in the middle of the series.  This may be the first Lorraine Heath book I’ve read, but I doubt this will be the last.  If you enjoy deeply emotional stories with complex and compelling characters, this book is for you.

Email ThisBlogThis!Share to TwitterShare to FacebookShare to Pinterest
Labels: 4 Star Review, Historical Romance, Lisa, Lorraine Heath, The Duke and the Lady in Red