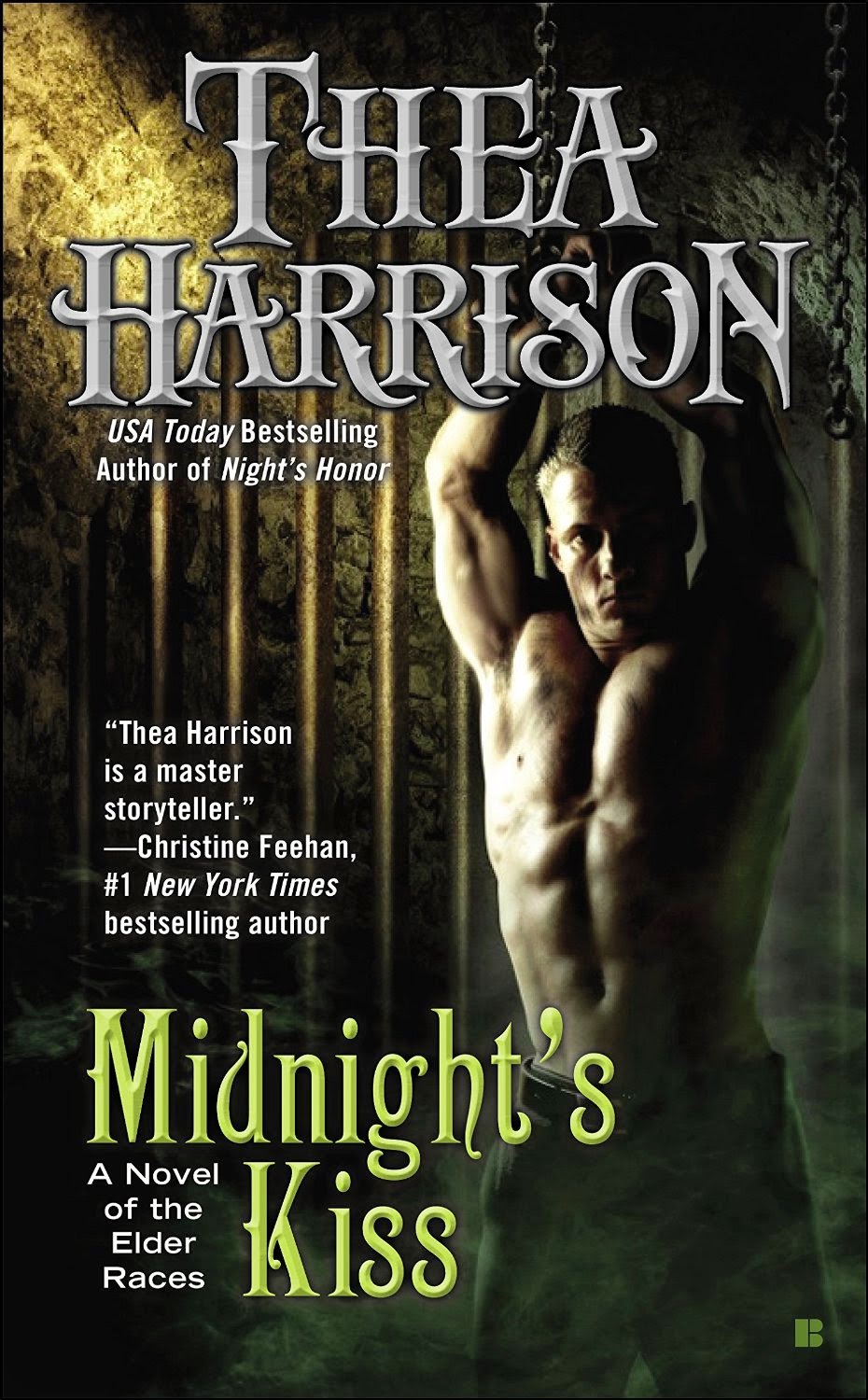 Keeping a series fresh by the time it reaches 16 installments--seven books and several novellas and short stories--has to be a challenge.  Midnight’s Kiss, the latest installment in Thea Harrison’s Elder Races chronicles hits the mark nicely.  It wraps up the conflict in the Nightkind Demesne (the vampire territories) that has been building for several books and gives the Nightkind King, Julian Regillus, and the Light Fae Heir, Melisande, a second chance at love.

The book starts fast, with Julian going on the hunt for a member of the demesne council who tried to murder his closest friend.  The stakes take a big jump immediately when the councilor, Justine, kidnaps Melisande. When Julian learns what has happened, his old, painful belief that Melly cheated when they were together is not enough to stop him from doing whatever it takes to free her.

The two end up prisoners of the rogue vampire, Justine, and form a reluctant alliance to survive. The experience shows them both that the passion they shared is not dead.  While trying to figure out what that want to do about that, they go after Justine. Along the way, they also learn what really happened when they broke up and work on dissolving their old resentments.

Melisande uses her inherent Light Fae charm as an actress, which may be why Justine considers her as “Pretty and well meaning, and stupid as a poodle.” One of my favorite lines in the book comes when Melly, left alone by her captor at last, reminds herself, ‘Poodles are smart.”  And so is she--smart, brave, and compassionate, even toward the man who broke her heart.

Julian has not always been a fully sympathetic character in this series.  It’s difficult, though, to resist a man who’s willing to sacrifice himself for a woman he doesn’t trust and doesn’t want to admit he cares about.  His courage and determination stun Melly and have her reconsidering his past actions.

Xavier and Thea from Night’s Honor also play roles in this story, giving us a peek at the evolution of their relationship and at his recovery from the events of the last book.  Julian’s household staff, mainly just glimpsed in earlier books, play somewhat larger roles here.  There’s also a fun scene with a group of bikers.

Harrison pulls off the trick of making both Julian’s and Melly’s reactions to their past breakup sympathetic.  The characters work through their old hurts and resentments instead of waving them away and starting anew.

Harrison weaves the romantic arc through the action plot.   The stakes escalate, with Justine always one step ahead until the climactic battle at the end.  The story moves at a good pace and stays absorbing.