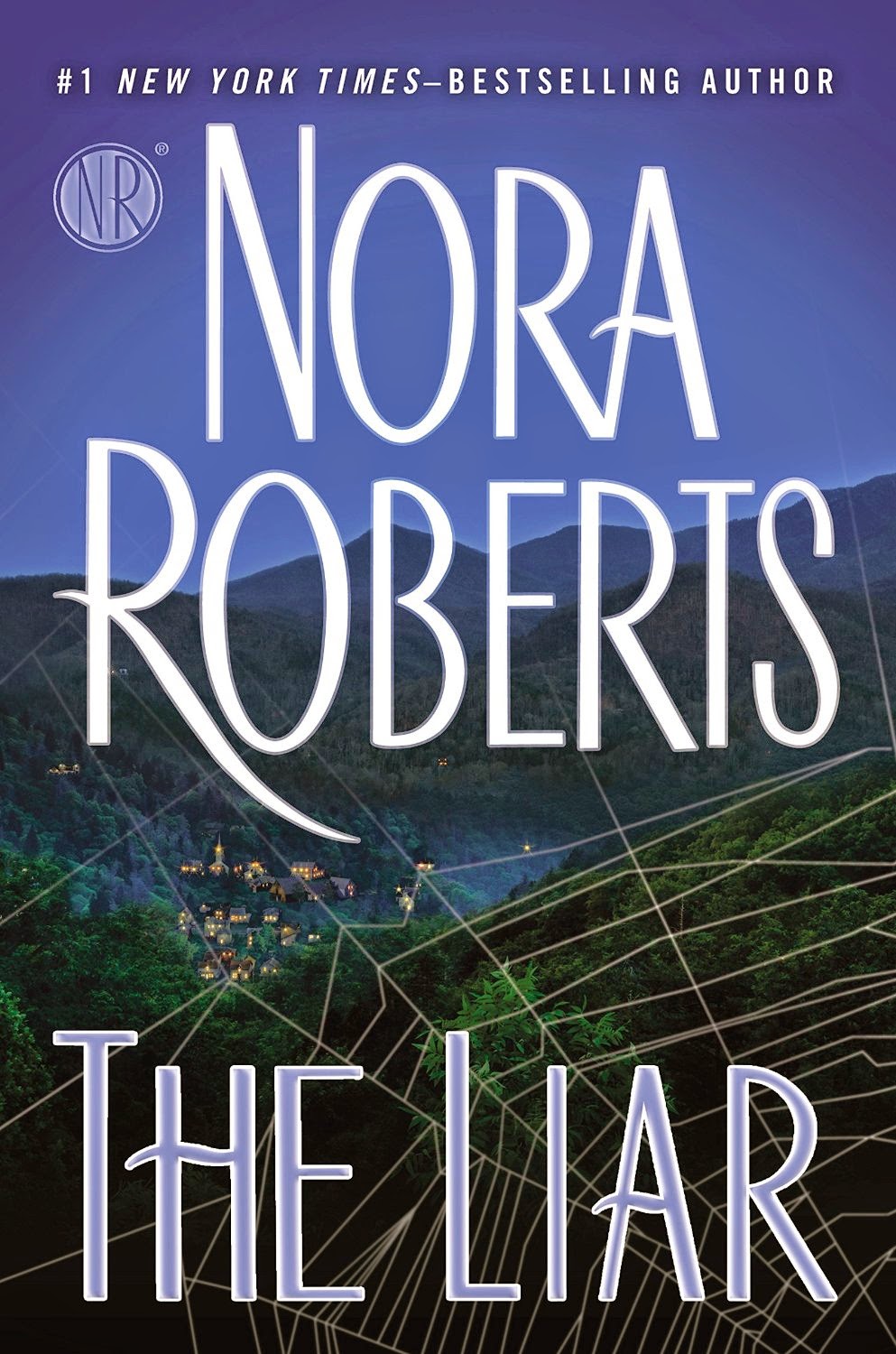 Nora Roberts’ latest stand-alone romance, The Liar, is about a young woman, Shelby Pomeroy, whose husband is lost at sea.  He leaves huge debts behind, and the process of clearing them away and closing up the home she can’t afford on her own shows Shelby that she really knew very little about the man she married.  She decides to return to her hometown, Rendezvous Ridge, Tennessee, to raise her young daughter, Callie.

Going home forces Shelby to acknowledge how much her husband cut her off from family and friends, many of whom are reluctant to reopen old relationships they feel she severed.  Mending fences and re-forging these ties leads her to realize how much she let him mold her into someone unlike her real self.  Shelby resolves not to let that happen again.

As she rebuilds her life, finding a job, settling into the town again, and planning for the future, disquieting information about her late husband’s activities comes to light. Roberts skillfully builds these revelations until they’re virtually cascading toward the end of the book and a climactic showdown.

Of course there’s also a romantic arc.  The hero, builder Griffin Lott, is attracted to Shelby from the moment they meet in a kitchen he’s remodeling.  He sets out to win and, as is typical of Roberts’ heroes, refuses to be deterred by Shelby’s qualms over entering another relationship at this point in her life.  Griff patiently sets out to win her trust and then her heart.

His first success is with Callie, who takes to him immediately.  The way Roberts handles their interaction is one of my favorite parts of this book.  I also love the texts he sends Shelby when he watches Callie for her.

The way Shelby’s family rallies around her despite their hurt over her long absence is also handled beautifully.  There are no magic wands for resolving conflict in this book, and the way the family works through the past to build the future is brilliantly done.

As a native Southerner, I’m always nervous when someone who’s not from the South sets a book here. Non-southerners often mangle the usage of y’all (in no place I’ve ever been, and that includes most of the South, does it mean just the person being addressed, even though it may be addressed to one person--it is, after all, a contraction of you all) or use it ad nauseam, and fall back on stereotypes.  Maryland, where Roberts lives, is more a border state than a Southern one, so I approached The Liar with some trepidation despite being a huge fan of Roberts’ books.

I need not have worried.  Roberts nailed the small-town atmosphere.  Her y’all usage is spot-on and not overdone.  There’s a bit much of the double-name convention (Ada Mae, Emma Kate, Shelby Anne, Callie Rose) for me, but not to the point of being annoying.

My only real problem with the book was that I’m not sure what Shelby does with a smartphone (which presumably has a virtual, rather than an actual, keyboard) toward the end of the book is truly possible.  By that point in the story, however, I was so completely hooked that I just frowned at it and moved on.

This book has a terrific setting, engaging characters, and a beautifully built story.  I highly recommend it.

A former attorney who never outgrew her love of comic books, science fiction and fantasy, Nancy left the legal profession to pursue her dreams of creating her own action adventure stories.  Check out her terrific contemporary romances set within a fantasy world in present-day Georgia.
Posted by pjpuppymom at 12:30 AM