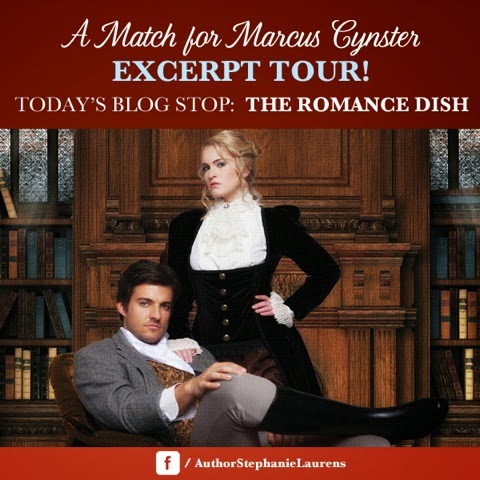 It wasn’t his place to ask. He reminded himself of that as he closed the door and followed her. She’d swept straight through into the living room. As he ducked beneath the archway, he saw her pause by the table, inspecting his endeavors. She turned as he crossed the room toward her.
She was petite while he stood over six feet tall; her head barely reached his shoulder.
Rather than tower over her, he waved her to the pair of armchairs that faced each other across the wide hearth. He sensed rather than saw her approval of the courtesy as she walked on and, with a swish of her heavy skirts, sat.
He followed and sat in the other armchair. His gaze on her face, he tried to imagine what she was doing there—why, after all these months of no contact, she’d sought him out. When she volunteered nothing, just studied him, as if trying to imagine his likely reaction to some request, he said, “I would offer you some refreshment, but my housekeeper and majordomo have gone shopping. I don’t think you’d appreciate my efforts at making tea.”
She blinked, slowly, and he saw her absorb the information that she was alone with him in the house. If this was a social call… 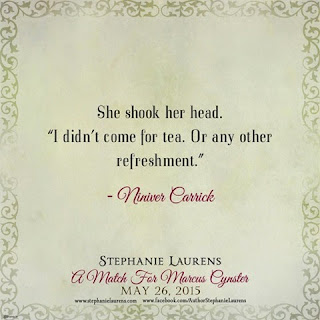 Definitely not a social call, then. Her big blue eyes still measuring him, she caught her lower lip between her teeth—something he’d noticed she did when uncertain, or cogitating about something that bothered her. Him? Or what had brought her there?
He sat back, attempting to look as unthreatening—as encouraging—as he could. “So, how can I help you?”
Now she was there, face to face with him, Niniver had second and even third thoughts about the wisdom of her course, but she still needed help. She desperately needed a champion, and there he sat, the perfect man for the task.
With his black locks—not true blue-black but black with an underlying hint of red, the very deepest mahogany—framing his face, one dark lock falling rakishly over his broad forehead, sitting as he was, relaxed and at his ease, his long-fingered hands elegantly disposed on the chair’s arms, his muscled horseman’s thighs, long, buckskin-clad legs, and top-booted feet arranged in an innately graceful pose, he should have appeared no more dangerous than any London dandy. Instead, a tangible aura that seethed with restrained power, edged with menace, emanated from him.
As a deterrent to her importuning suitors, she couldn’t imagine finding better.
Squelching all caution, she met his dark blue gaze—a midnight blue so dark it was difficult if not impossible to guess his thoughts. “Remember that promise you made to me up at the lookout?”
He blinked, dense black lashes briefly screening his eyes before they rose again, and he pinned her with his gaze. “That if you needed help, you could count on me—that you only needed to ask?”
She nodded—once, decisively. “Yes. That.” She paused to marshal her words. “I need help with a particular problem, and I think—I believe—that you are the most appropriate person to ask for assistance—the person most likely to be able to help me resolve the issue.”
He was now considering her exactly as she’d previously considered him. “And your particular problem is?”
“Men.” The word slipped out before she’d thought. She grimaced and forged on, “Specific men—namely men of the clan who assume I must be looking for a husband, and who are putting themselves forward overenthusiastically.” She couldn’t hide her irritation; it underscored her tone.
To her surprise, Marcus…stilled. There was no other word for it. His gaze remained on her—he was still looking at her—yet she got the distinct impression he was seeing something else. That he was viewing something beyond her.
He barely seemed to breathe.
But then he blinked, and he seemed to draw back, pull back. He hesitated, then asked, “How…enthusiastic have they been?”
His voice had lowered, deepened. For an instant, she wondered if she was doing the right thing in setting him on her poor unsuspecting clansmen. Then she remembered the scene in the stable yard. She tipped up her chin. “I suppose you could say that, each in their own way, they’ve been trying to woo me, but they keep tripping over each other, and then they clash. But even worse, they egg each other on to ever more ridiculous exploits, ones that are harder and harder for me to…avoid.”


Put into words, the situation didn’t sound that bad, but to her, it was seriously bothersome, and more worrying than she could easily convey. “I know it sounds silly, but I have a position within the clan to maintain, and with matters as fraught as they are at the moment, having to deal with idiotic behavior directed toward me personally, behavior that tends to—well, belittle me—is distracting, disturbing, and sometimes unnerving. On top of that, some of the men involved are sons of clan elders, and that adds a certain political constraint to how blatantly I can repel their advances.” She blew out a breath. “I need someone who will simply step in and tell them all to stop. Someone they’ll listen to—because not one of them pays a posset’s worth of attention to me.” 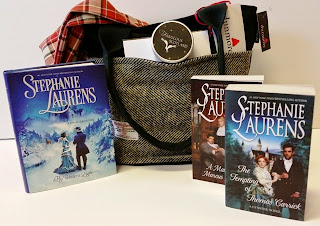 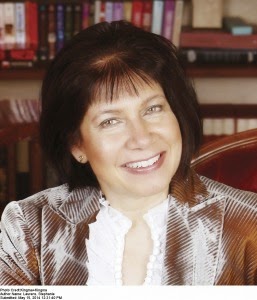 #1 New York Times bestselling author Stephanie Laurens began writing romances as an escape from the dry world of professional science. Her hobby quickly became a career when her first novel was accepted for publication, and with entirely becoming alacrity, she gave up writing about facts in favor of writing fiction.Laurens's novels are set in the time period of the British Regency, and her settings range from Scotland to India. Laurens has published fifty-three works of historical romance, including 31 New York Times bestsellers. All her works are continuously available in print and digital formats in English worldwide, and have been translated into many other languages. An international bestseller, among other accolades Laurens has received the Romance Writers of America prestigious RITA Award for Best Romance Novella 2008, for The Fall of Rogue Gerrard.

A Match for Marcus Cynster continues Laurens' popular series of books revolving around the Cynster family. 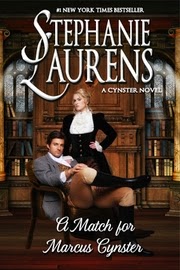 Duty compels her to turn her back on marriage. Fate drives him to protect her come what may. Then love takes a hand in this battle of yearning hearts, stubborn wills, and a match too powerful to deny.
#1 New York Times bestselling author Stephanie Laurens returns to rugged Scotland with a dramatic tale of passionate desire and unwavering devotion.
Restless and impatient, Marcus Cynster waits for Fate to come calling. He knows his destiny lies in the lands surrounding his family home, but what will his future be? Equally importantly, with whom will he share it?
Of one fact he feels certain: his fated bride will not be Niniver Carrick. His elusive neighbor attracts him mightily, yet he feels compelled to protect her—even from himself. Fickle Fate, he’s sure, would never be so kind as to decree that Niniver should be his. The best he can do for them both is to avoid her.
Niniver has vowed to return her clan to prosperity. The epitome of fragile femininity, her delicate and ethereal exterior cloaks a stubborn will and an unflinching devotion to the people in her care. She accepts that in order to achieve her goal, she cannot risk marrying and losing her grip on the clan’s reins to an inevitably controlling husband. Unfortunately, many local men see her as their opportunity.
Soon, she’s forced to seek help to get rid of her unwelcome suitors. Powerful and dangerous, Marcus Cynster is perfect for the task. Suppressing her wariness over tangling with a gentleman who so excites her passions, she appeals to him for assistance with her peculiar problem.
Although at first he resists, Marcus discovers that, contrary to his expectations, his fated role is to stand by Niniver’s side and, ultimately, to claim her hand. Yet in order to convince her to be his bride, they must plunge headlong into a journey full of challenges, unforeseen dangers, passion, and yearning, until Niniver grasps the essential truth—that she is indeed a match for Marcus Cynster.