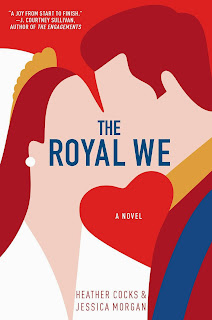 Imagine you choose to go to Oxford for your junior year in college and you end up becoming friends with the son of the Prince of Wales, who lives right down the hall. Imagine you bond over bad TV dramas, meet his family, and become the person he reveals his darkest secrets to—and then imagine he proposes and you say yes.

Heather Cocks and Jessica Morgan tap into every Royal Watcher’s secret fantasy, what would it be like to date (and marry) a future king of England? Being I’m an avid Royals follower (the Brits, not the baseball team), as soon as I saw this book, I had to read it. I was not disappointed.

Bex Porter, daughter of the Iowan magnate who created the Coucherator, goes abroad a year during her junior year in college and ends up being hallmates with the future King of England, Nick Wales. She has no intention of falling for Nick the Future King—the idea is absurd and as everyone around her reminds her, “You’re American. He will never marry you.”—but soon falls for Nick the Guy Few Others Get to See. They’re really just friends, bonding over bad TV and late night confessions. She’s easy to be with; she has no designs; and he finds himself telling her things that even his closest friends don’t even know.

Then much like the Will and Kate version of the story, they fall in love and start dating—and it all goes to hell in a handbasket. Not that their relationship was overly easy before, but it’s even more ridiculously hard now. Bex finds herself hated by nearly everyone but Nick, and while Nick loves her, he’s unwilling to vouch for her or acknowledge their relationship as something meaningful. Oh, the road to love does not go smoothly, does it? And as I stayed up reading to the end of the book, on a work night, into the wee hours of the morning, I gasped more than once at plot twists I did not see coming. Really, how was this remotely going to work out in the end?

I can only hope that maybe they’ll have a book out about THE ROYAL WE becoming parents, which will include some of these answers, and hopefully, having Freddie back in a role of being favorite secondary character. Fingers crossed.