Review - - The Hellions of High Street

Cara Elliott’s Hellions of High Street series was released in digital editions last year. This spring saw back-to-back print editions of the trilogy released. The trilogy focuses on the Sloane sisters—Olivia, a political writer; Anna, author of adventurous, erotic romance novels; and Carolina, a poet. Daughters of the late Baron Trumbull, an eccentric scholar whose specialty was primitive cultures and their rituals, the sisters have received an unconventional education that includes not only instruction that equals that of males of their class but also training in self-defense and sex education. Their father’s death has left them in genteel poverty, and their mother, as conventional as their father was unconventional, is unwaveringly focused on seeing her daughters married to wealthy aristocrats, the higher the title, the better. Although the sisters are definitely individuals, they are all highly intelligent and high spirited. Olivia acknowledges that “Neither spirit nor imagination is anything the three of us lack. . . . It is restraint over our creative impulses that we all might exercise a little more often.” 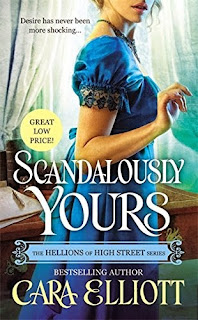 Scandalously Yours is the story of Olivia, the eldest sister, and John, Earl of Wrexham, a widower with a ten-year-old son, and a former military officer whose courage and strategy earned him the sobriquet “the perfect hero.” The least conventional of the sisters, Olivia makes little effort to conform to her mother’s ideas of a proper lady, frequently declaring her disinterest in marrying well—or, indeed, marrying at all. Her indifference to society’s rules leads to her being labeled “the Hellion of High Street,” but even her detractors would be shocked if they knew Olivia’s secret identity as “the Beacon,” the anonymous author whose newspaper column argues eloquently for radical social reform.

Wrexham, with his military service behind him, has taken his seat in the House of Lords and is looking forward to using his influence to see reform legislation passed, particularly policy changes that will benefit veterans of the Napoleonic Wars, many of whom are jobless and poor. He knows that the proper wife will be an asset in his political life, and he also believes that Prescott, his young son, will benefit from a mother’s presence. He thinks he may have found the ideal candidate for his next countess in the person of Lady Serena Wells, a proper lady so rigid in her rule-bound life that Scottie and his best friend Lucy, the daughter of a local innkeeper, refer to her as “the Steel Corset.”

Wrexam and Olivia are intrigued by one another from their first meeting in a darkened library, but he tells himself she is far too unconventional for him. And Olivia is convinced that he is a stuffy gentleman determined to relegate women to their designated place. It is only after Wrexham discovers she is “The Beacon” and the two work together on his maiden speech in Parliament that they realize how much they have in common and how strong the attraction between them is. Even then, it takes a kidnapping and a daring rescue in which Olivia proves herself a hero’s equal in derring-do before they admit that the hellion is a perfect match for this perfect hero.

Olivia truly is an unconventional heroine, one with the courage of her convictions, and Wrexham, despite his stuffiness, proves to be a wonderful hero with admirable ideals, a genuine love for his son, and a subtle sense of humor. In addition to these engaging leads, Scottie and Lucy are the kind of child characters that make a reader long to see what kind of adults they turn out to be, and Olivia’s sisters emerge as appealing characters in their own right. 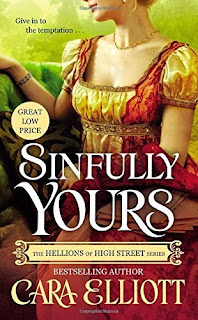 Sinfully Yours is the story of Anna, the middle Sloane sister, and Devlin Greville, the Marquess of Davenport, a delicious rake who harbors secrets. Anna is the beauty of the family and the one who has at least superficially most conformed to her mother’s expectations. She had accepted that she would marry well to save her family from poverty, but Olivia’s marriage to the wealthy Earl of Wrexham frees Anna from the need to marry one of her mother-approved suitors. Like her older sister, Anna has a secret identity. As Sir Sharpe Quill, she pens bawdy novels of adventure and romance featuring daring English orphan Emmaline Smythe and the equal-to-all-tasks Count Alessandro Crispini, but her elusive muse is making it difficult to meet her current deadline. So when her mother pushes her to attend a country house party at a remote castle in Scotland where the guests include a German prince whom Lady Trumbull covets as a son-in-law, Anna hopes the change of scenery will stir her imagination and help her to forget a certain infernal aristocrat.

The Marquess of Davenport, known as Devil Davenport for his dissolute lifestyle and disregard of others’ opinion of him, is also a guest. Anna and Davenport strike sparks off one another each time they meet, and a surprising kiss exchanged at a ball has haunted them both. He is at the house party on a covert mission for the Foreign Office who has reason to believe that the German prince may be the target of an assassin’s plot, but he also hopes it will be an opportunity for him to stop obsessing about Anna Sloane. He is astounded when Anna shows up at the castle. At first, Davenport wonders if Anna is part of the plot on the prince and Anna believes he may be a thief. But once their secrets are revealed, they work together to thwart a conspiracy that threatens not only the amiable prince but also England’s international alliances.

Anna is a mix of naïveté and a store of knowledge rare in a young woman of her class, and Davenport is a rake with contradictory layers. Watching them move from wariness to trust to love is a treat. Caro, the youngest Sloane, is now officially out in society, and she and Alec McClellan, a surly Scottish baron with republican convictions have their own barbed bouts. This second novel is a blend of adventure and romance that more than rivals the fictional deeds of Emmaline and her count. 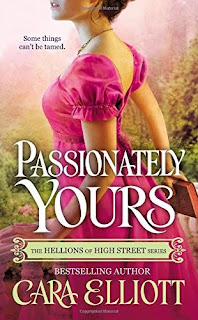 Passionately Yours features Carolina Sloane, the youngest Sloane sister, and Alec McClellan, Lord Strathcona, the baron with whom Caro exchanged barbs in Scotland. The two meet again when Caro and her new friend Isobel Urquehart are attacked by brigands in Bath. Although Caro puts up a strong fight and leaves one of their abductors squealing in soprano tones, she is no match for the number of men in group threatening her and Isobel. Fortunately a rescuer shows up. Unfortunately, at least from Caro’s perspective, the rescuer is Alec McClellan, half-brother of Isobel.

Alec, who is wary of women—particularly English beauties after an unfortunate marriage to one such young woman—is not at all pleased that his sister and Caro are friends. He is also concerned about the safety of his family because he and some of his radical friends parted company when Alec disagreed with their methods. He is irritated by his reluctant fascination with Caro.

As Alec and Caro see more of one another, they continue to strike sparks amid their verbal jousting, but they also discover they have more in common than either suspected. Caro proves sympathetic to the injustices Scotland has suffered, and Alec’s appreciation of poetry delights aspiring poet Caro. But Alec is slow to trust, and a former friend of Alec’s turns out to be a smiling villain who fans Caro’s suspicion of Alec. It is not until danger once more threatens Caro and Alec again takes on the role of rescuer that these stubborn lovers find their HEA. The secondary romance charmed my beta-loving heart.

If you like historical romance with intelligent, headstrong heroines and sigh-worthy heroes involved in plots that mix danger, political intrigue, and romance, I definitely recommend Cara Elliott’s Hellions of High Street. The books also contain a rich vein of humor. Scandalously Yours is my favorite of the three, but Elliot is a superb writer and the full trilogy is an investment that pays off with memorable characters and satisfying stories.


Have you read any of Cara Elliott's books?

Do you enjoy a bluestocking heroine?

Are you a fan of books that have a mix of political intrigue, danger and romance?

In addition to the Rafflecopter giveaway below, one randomly chosen person who leaves a comment on today's post will receive a print copy of Passionately Yours by Cara Elliott. (US/Canada only)