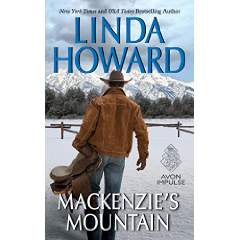 Linda Howard’s classic 1980s romance, Mackenzie’s Mountain, is newly available in digital format. Her hero, Wolf Mackenzie, is a half-breed rancher ostracized by the people of tiny Ruth, Wyoming. An outsider in every sense, Wolf was convicted as a serial rapist several years ago. Although he was eventually cleared of all charges and released, he is still a rapist in the eyes of the community whose members are already prejudiced against him because of his “otherness.” The Mackenzie ranch is located on a mountain outside Ruth, and Wolf’s contact with the town and its citizens is minimal.

Mary Elizabeth Potter is an old maid schoolteacher, complete with spectacles, a cat named Woodrow, and a body and heart untouched by the rapacious males her aunt warned her against. When she discovers that Joe Mackenzie, a sixteen-year-old at the top of his class, dropped out of school two months ago, Mary determines to reclaim him. Her first visit to the Mackenzie ranch does not go as she expects. A Savannah, Georgia, transplant, Mary is unprepared for Wyoming winters. When her car breaks down and she is forced to walk to the ranch. She is in the first stages of hypothermia when she is rescued by Wolf Mackenzie.

At first sight, Mary and Wolf are less than impressed with one another. Mary is put off by his sheer size: “He was big, and she instinctively disliked that. She disliked the way big men looked down at her, and she disliked being forced by sheer physical size to look up at them.” Wolf takes one look at her and stereotypes her: “He’d never seen anyone who looked more like a schoolteacher than this woman.” At second sight, they fall quickly and deeply into lust, a response that they both find disturbing. Their feelings soon deepen into love.

Wolf knows that with any association with him Mary risks her reputation and the respect of the community. Her insistence on tutoring Joe to give him a shot at fulfilling his dream of flying is already risk enough. But while Mary may look like a mouse, she is a lioness in her convictions.  She defends her right to tutor Joe, and she refuses to ignore the town’s racist treatment of Wolf and his son. When a rapist strikes again, Wolf is immediately suspected, but Mary, certain of his innocence, is indignant at the ingrained prejudice of the town and the compound injustice of their suspicions. And she is willing to take on the whole town and risk her own life to see that Wolf is cleared and the guilty man is found.

Mackenzie’s Mountain is definitely old-school romance, glaringly lacking in political correctness, but it has been winning the hearts of readers for more than twenty-five years. One indication of its perennial popularity is its appearance on AAR’s top-100-romances polls in 1998, 2000, 2004, 2007, 2010, and 2013. The lead characters are unforgettable. Wolf is a warrior: “In his veins ran the blood of two of the most warlike peoples in the history of the world, Comanche and Celt.” He’s also a sensualist, and the scenes in which he introduces Mary to carnal pleasures sizzle. No generic sex scenes exist in this book. In each such scene, the reader is aware of these particular characters--who they are individually and who they are becoming together. Mary is the plain heroine who is beautiful to the hero. She has a difficult time believing that Wolf is interested in her: “I know I’m not an attractive woman, certainly not the type to stir a man’s—er, savage appetites.”  One of the many reasons I adore this book is that Mary, despite her lack of experience, possesses courage, physical and moral. She and Wolf save each other.

Although the novel is a contemporary, it has the feel of a historical. Some readers see the throw-back quality as a weakness. This may be particularly true for readers encountering the book for the first time in 2016, but it in no way lessened my enjoyment on my latest rereading. Readers who share my fondness for epilogues will turn the final pages with a sigh of satisfaction, and those who share my addiction to series will be delighted that Joe Mackenzie’s story (Mackenzie’s Mission, 1992, SIM #445)  will be reissued by Avon Impulse on April 5, 2016. Howard also wrote stories for the other Mackenzie offspring: Mackenzie’s Pleasure (1996, SIM #691), Zane’s story; “Mackenzie’s Magic,” a novella that offers the story of Maris, the only Mackenzie daughter (originally published in a 1996 Silhouette anthology, Christmas Kisses); and A Game of Chance (2000, SIM #1021), Chance’s story. I don’t know if Avon plans to reissue the rest of the series, but they are all already available in digital format. The last one was a three-star read for me, but I enjoyed all the others. As for Mackenzie’s Mountain, it’s been on my keeper shelf since I first read it in 1989, and my most recent reading just confirmed my discernment in placing it there.