The King's Outlaw
A Conquerors and Outlaws Novella
By Kris Kennedy
From the anthology Captured by a Celtic Warrior
Release Date: February 16, 2016 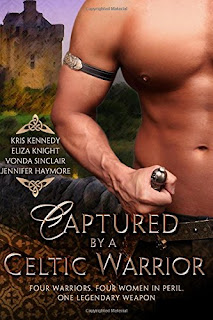 Tadhg O'Malley, an Irish outlaw, is on a mission of vital importance; tasked by the imprisoned Richard the Lionheart to return the jeweled dagger of Jerusalem to safety in England and keep it from hands that would use it to usurp the rightful king. One step ahead of his enemies, Tadhg has traveled from the Crusades in the Holy Land to Northern France and has only to cross the channel to England to complete his mission but that last leg of his journey may prove most difficult of all.

Magdalena "Maggie" the Tailor has a built a successful business despite the male dominance and corruption she is forced to deal with to bring her goods to market. She is not looking for a man to complete her life, thank you very much, but when Tadhg rescues her from the assistant port reeve's unwanted advances, she is immediately attracted to her handsome savior. He sees her as someone he can use to escape her small port city before his enemies find him and by involving her - without her knowledge - puts Maggie, and everything she has worked so hard to build, in danger.

When his enemies close in, Maggie's life is turned upside down and she is forced to flee with Tadhg, working together to thwart them. Desire flares and feelings deepen to something that could be lasting if not for the fact that her life and business are in France, his heart is in Ireland, his mission must come before all else, and, if the bad guys succeed, they won't live long enough to even have a chance.

I have a deep fondness for medieval romances, strong, sexy, Irish heroes and the women who are their match. Kris Kennedy is a master at creating all three. I've been a fan of her writing since reading her Golden Heart Award winning second book, The Irish Warrior six years ago.

"The King's Outlaw" is a fast-paced, sizzling story of loyalty, betrayal, adventure, and love and with its Irish hero, perfect reading for St. Patrick's Day!

"The King's Outlaw" is part of the boxed-set anthology, Captured by a Celtic Warrior. The set also includes "Taken by the Highlander" by Eliza Knight, "Stolen by a Highland Rogue" by Vonda Sinclair, and "Her Wicked Highlander" by Jennifer Haymore.
Posted by pjpuppymom at 12:30 PM