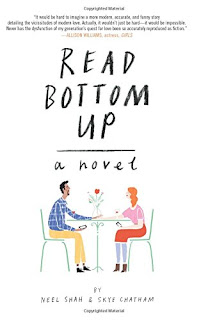 READ BOTTOM UP is a relationship 101 told solely from a series of texts and emails between the hero and heroine, and their respective best friends.

Elliot meets Madeline at a restaurant opening where she sees him talking it up with some beautiful girl.  His ex.   But when Elliot bemoans his past relationship with said ex to his friend, David, David encourages him to move away from his past dramas and to make an effort with Madeline, whom Elliot thinks is both smart and funny.

And so it begins:  the tentative first email, the invitation out, the first date, the better date and so on.  And at the same time, every take on the progression of Elliot and Madeline’s relationship is analyzed through Madeline and her best friend’s conversations, and Elliot and his best friend.

It’s a unique structure that actually works because once the reader gets the hang of only digital correspondence telling the story, it’s consumable in one sitting.   And there is something quickly consumable about no narration.

What's more, there are some clever witticisms and hilarious one-liners:

From David (hero’s bff) to Elliot (hero):
“You’re not allowed to describe girls as ‘cool’ after Gone Girl.”

This type of fun, casual conversation abounds in the relationships between the main characters and their friends.  But that leads me to my first complaint:  I found the novel’s friend relationships more interesting than the romantic.  I’m still not convinced, however, that READ BOTTOM UP is a romance, though the entire plot is weaved around the anatomy of romantic love.

That romantic love, though, does forge through a somewhat weak though realistic conflict.   The conflict IS weak but when I say “realistic” that is also a compliment because there are moments of such clear romantic truth, anyone who’s ever been in a relationship will nod their heads.

Here’s one such romantic truth:   boy can’t understand why girl is pissed and backs off thereby pissing off girl even more though girl was originally pissed at boy’s lack of effort, etc.  You see?  And from the reader’s perspective, you can see how boy thinks girl is too shrewish for the beginning stage of their relationship and also what a knucklehead boy is for not being emotionally grown up enough to acknowledge the relationship’s potential.   Oy on all sides.

I did find the most interesting exchanges occurring between Madeline and Emily versus the men.  The female perspective is where the most meaty analysis transpires, and maybe because I’m a woman, I find it most intriguing.  Who knows?  But the depth of character resides with the women in this book.

On the other hand, I very much like the hero’s best friend, David.  He is an emotional grown up.  The hero, however?

Let me just say the very nicest feelings I can drum up for Elliot are tepid. TEPID!  But he’s our hero so I want him to step up though, perhaps, he doesn’t need to step up.   Perhaps READ BOTTOM UP is significant because of its apparent mispairing.

I won’t tell you how it all plays out though I will say, in the end, I would recommend READ BOTTOM UP.  It’s absorbing.  Do I hope the authors move forward with the same email/text structure for many more books to come?  No.  Once is fun but once is enough.  More is green beer:  it’s fine to drink it once a year, say, on St. Patrick’s Day, but every other day it’s just some sort of contrived (albeit clever) kitsch.

But the book does work.

In your experience, do you ever find yourself rooting for an HEA (happily ever after) for a character you don't like very much?

~J Perry Stone
Posted by pjpuppymom at 12:00 AM