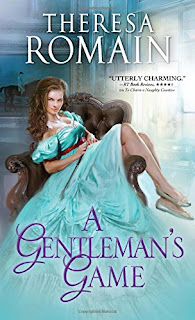 A Gentleman’s Game is the first novel in Romain’s Romance of the Turf series. Nathaniel Chandler is the younger son of Sir William Chandler. Both Chandler sons are part of the family horse training business, but Nathaniel’s relationship with his father is a tense one.  Years of traveling on his father’s business, successfully buying and selling horses and making other key decisions, have done little to alter the opinion of him his father formed when Nathaniel was a rebellious fifteen. Nathaniel is hungry for his father’s respect, but his every move seems only to reinforce Sir William’s conviction that his younger son is not to be trusted when the family’s reputation is at stake.

Returning from another successful sales trip, Nathaniel finds his father troubled by an inexplicable outbreak of colic among horses in the Chandler stable. Nathaniel proves himself competent and compassionate in his treatment of the ill horses, but even that is not sufficient to persuade Sir William that Nathaniel can be trusted. Sir William agrees to Nathaniel’s request to be in charge of moving two valuable horses from Newmarket to Surrey for a race only if Nathaniel is accompanied by Sir William’s secretary who will report directly to Sir William on how the journey is going.

Rosalind Agate is the baronet’s secretary. A recent employee, she has nevertheless quickly earned Sir William’s trust with her intelligence and quickness. What the Chandlers do not know is that Rosalind is a spy placed in their household by the woman who has been controlling Rosalind’s life for a decade. The woman known as Aunt Annie paid for the medical treatment of thirteen-year-old Rosalind who was severely burned in a fire. Since her recovery, Rosalind has been paying her debt to Annie by taking on the guise of maid, governess, and now secretary while serving at Annie’s command. Isolated from her family and unable to make friends, Rosalind is lonely and uncomfortable with her life of deceit. She also fears Annie is behind the poisoning of the Chandler horses.

A significant part of the story deals with Nathaniel and Rosalind’s road trip and the friendship that turns into romantic love which develops between them. They are both people whose lives have been limited by something that happened to them at an early age. They both yearn to break free to become more fully themselves, and their relationship, despite its implicit problems, allows them to do so. Readers will find themselves fully engaged with this appealing pair and rooting for their HEA.

I’ve been a Romain fan since her debut book, and it has been rewarding to see a good writer grow even better with each series. Nevertheless, I confess I had mixed emotions about the Romance of the Turf series. I had high expectations of Romain as a storyteller, but I was not enthusiastic about a horse racing series. The Sport of Baronets, the feuding-families novella that introduced the series, reassured me that the horse racing context would not overshadow the superb characterization that has kept me reading Romain, but I still had some reservations. After reading A Gentleman’s Game, I have none. I loved these characters! Rosalind is a wonderful heroine—smart, vulnerable, and utterly endearing. But it is Nathaniel who made this a five-star book for me. I have been in love with beta heroes since my early teens, and he is one of the best I have encountered. He has the charm, humor, and genuine kindness that characterize the true beta, and he has the strength and competence that belie the beta’s erroneous reputation as a wimp. Moreover, he is uniquely himself, an individual rather than a type. I adore him! Secondary characters add to the reader’s enjoyment. The relationship between Nathaniel and his father is authentic and touching, and Rosalind’s busy, open-hearted family is a joy.

The only note of dissatisfaction is the Aunt Annie subplot, which is a bit of a loose thread. However, I have confidence it will be tied up in a later book. The next novel in the series, A Rogue Never Rests, which will be released on October 4, 2016, is on my most-anticipated list. I highly recommend A Gentleman’s Game, especially for readers who enjoy characters who are a bit different. Despite Sir William’s title, these characters are refreshingly not the usual privileged aristocrats.