Review - - Because of Miss Bridgerton 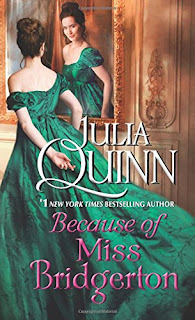 Sybilla Bridgerton, affectionately known as Billie, is a tomboy who grew up running untrammeled with the three middle Rokesby children on their families’ adjoining estates in Kent. The close friendship between the Rokesbys and the Bridgertons meant that the children grew up as extended family. Mary Rokesby was Billie’s life-long best friend, and Mary’s slightly older brothers Edward and Andrew, who learned early that Billie could keep up with them and often best them, were also cherished companions. George Rokesby, Viscount Kennard, older than Andrew by five years and aware from an early age of his responsibilities as heir to his father’s earldom, was set apart from this foursome, a more serious and, at least regarding Billie, frequently disapproving figure.

Even at twenty-three, Billie remains the same free spirit, more interested in running an estate than in managing a household and adored by everyone despite her unconventional behavior—everyone but George Rokesby who still disapproves of her. Of course, when Billie (in her breeches) ends up stuck on the rooftop of a farmhouse with a sprained ankle after an attempt to rescue a cat, the irritating George has to be the one to come to her rescue. He’s no happier with the situation than Billie is, especially when the ladder falls and they both have to be rescued by Andrew, on medical leave from the Royal Navy with a broken arm.

Billie may lack all the feminine accoutrements and accomplishments George thinks necessary for any proper lady and certainly for his future countess, but somehow after their time on the roof, he can’t stop thinking of her courage and her humor and her eyes and other assorted body parts. On her part, Billie finds herself thinking of George far too often for her comfort. When Edward, the second Rokesby son, is reported missing during the American Revolution, the Countess of Manston insists that Billie accompany her and George to London. She has plans to find Billie a husband while George applies pressure to find news of Edward. George is not happy to think of Billie as the wife of some other man, but circumstances interfere with his plans to check his mother’s matchmaking. Can old frenemies overcome all obstacles and find the path to true love?

Julia Quinn moves backward to the 1770s and an earlier generation of Bridgertons in this first book in a new series. Nobody tops Quinn when it comes to light-hearted, banter-filled historical romance, and she gives her readers another cast of characters to adore in this scintillating addition to her oeuvre. From the moment George joins Billie on the roof, the reader is in no doubt that these two are on their way to an HEA, but the journey there is such fun that the predictability is irrelevant. Billie is a delight, and the more somber, more conventional George is just what she needs as balance. By the same token, she adds color and light to his somberness and a sense of belonging to his loneliness. It is easy to imagine this pair sharing a lifetime.

Quinn also succeeds once more in creating families that are endearing and interesting. Mary is already happily married, but Andrew Rokesby is clearly a charmer in want of a heroine, and Edward surely deserves an HEA. (I’d love to see him with an American heroine.) Billie’s younger sister is one of the novel’s most interesting characters, and there are two Bridgerton brothers and one Rokesby at Eton to round out the series once they grow up a bit. The first book in a series needs to capture the reader’s interest as a standalone and leave the reader hungry for more from this world. Quinn succeeds on both counts.

Reading Because of Miss Bridgerton, I was reminded of my favorite traditional Regencies. Even though this novel is chronologically a Georgian romance, it has the same charm that those beloved Regency romances possess. I consider this book another Quinn keeper, and, with a satisfied smile and an approving nod, I highly recommend it.

Addendum: I also must add that George makes a choice at one point that alone would have left me feeling the book was worth reading. I can’t say much for fear of spoilers, but he does something that I have longed for dozens of other heroes to do. Thank you, Julia Quinn!