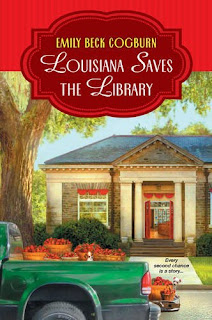 Louisiana “Louise” Richardson transplanted herself and her two children—four-year-old Max and eighteen-months-old Zoe—to St. Jude, Louisiana, in order to join the faculty of the Department of Library Science at Louisiana A&M. Between her teaching load, the pressure to publish for tenure, meeting the needs of two energetic kids, and fretting over late child-support checks from her ex who has shown little interest in being part of his children’s lives, Louise is stretched to the max. It doesn’t help that except for her colleague and best friend, Sylvia Jones, she is an awkward fit in her new community, still dealing with culture shock. Then, as if life is determined to show her that things can get worse, the university, beset by budget cuts, decides Library Science is expendable. Untenured faculty members are released with scant notice. Jobless, facing a dismal academic market, and ineligible for unemployment, Louise is feeling desperate.

Fortunately, Sylvia finds jobs for herself and Louise at the public library in nearby Alligator Bayou, a tiny town stuck in the 20th century. Louise and Sylvia are determined to drag the Alligator Bayou Public Library into the present and make it a center of community life, but they will have to do so on a shoestring and over the objections of the aging, out-of-touch director who is allergic to change and the fierce opposition of a powerful local politician who wants the library closed. Complications increase on the personal front as well. Louise finds herself attracted to and confused by a strawberry farmer who courts her in practical and tender ways and ambivalent about her ex’s move to St. Jude with his younger, thinner, richer second wife.  She knows his desire to be an involved father is good for her children, but sharing Max and Zoe is difficult.

Louise is an appealing heroine, funny and smart and disarmingly real. Both the academic setting and the small-town library with its eccentric staff ring true. In a time when pressure to close public libraries is all too real, the plight of the Alligator Bayou Public Library will strike a familiar note with many readers. The colorful cast of secondary characters is a definite plus. Sylvia is a delight, and Sal is a great beta hero. Max and Zoe behave like typical kids with no irritating preciousness or precocity. I particularly liked that the ex and his new wife are multidimensional characters and not just another jerky former husband and his bitchy bimbo bride. Best of all, Louise and the library get HEAs. If you enjoy humorous women’s fiction rooted in the real with a strong romantic element, I think you will enjoy this one as much as I did. It is a debut novel for this author, and I  for one look forward to seeing what she does next.