“I am the knight to your queen.”
Ethan Night to Selenka Durev in Alpha Night 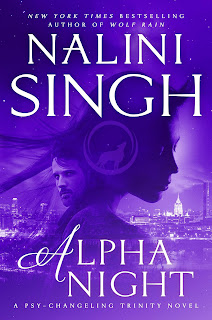 This is one of the best lines I’ve ever read in a romance. I’m happy to say the story around it lives up to its potential.

By the time a series hits its 19 th full-length novel, there has usually been an installment or two that’s less satisfying than the others. Nalini Singh’s Psy/Changeling books, however, have all hit the same high notes consistently in the novels and related novellas. That may be in part because of the multifaceted worldbuilding, which sets up aspects of the emotional arcs. It’s more so, I think, because Singh has a genius for creating emotionally damaged characters with depth and heart.

In the world she designed, the Psy have various telepathic and telekinetic abilities, as one might expect from their name. They were originally determined to suppress all emotion, sometimes doing so brutally, to achieve a state they called Silence. The early books in the series dealt with various Psy breaking away from Silence, which eventually failed, shaking up the Psy political and social order. Many of this group also were dedicated to the acquisition and use of power. Many of the Psy/Changeling lead characters who’re Psy have been damaged by one or the other of these drives and sometimes by both.

Their antithesis are the Changelings. These land or sea creatures generally live in groups and revel in their emotions and each other’s. They are connected in ways the Psy have yet to fully learn in this first generation after the fall of Silence.

Humans are caught between the other two, wary of the Changelings and rightfully distrustful and fearful of the Psy. Yet it was a Human who spearheaded the Trinity Accords to bring the three races together after the end of Silence made the Psy more reliable allies.

Cooperation among the three races is still fairly new at this point in the series. Alpha Night opens with a conference involving Changelings and Psy. The heroine, Selenka Durev, attends as alpha of Russia’s most powerful wolf pack, DarkEdge. There she meets Ethan Night, one of the Arrows, black ops Psy squad used as a weapon by the Psy Council under Silence but now
learning to navigate a world of emotion.

Ethan’s unusual in that he can meet the stare of an alpha wolf without flinching. He also possesses a unique psi ability. Because of that, a former councilor abused him from childhood to force him to become an obedient, murderous weapon. Ethan resisted, but the damage he suffered has left him lonely, emotionally detached, and oblivious to his value to the rest of the Arrows.

Ethan’s at the conference not only to provide security but with a darker motive he readily discards when events don’t go as he was told they would. As he and Selenka work together in the aftermath of an attack, the Changeling mating bond springs to life, binding them both. It isn’t a smooth mating, as a jaggedness in Ethan creates static in the bond.

Other issues also challenge their relationship. Selenka suffers from having been abandoned by her human mother and discounted by her emotionally distant father, who resents her status as alpha. As her pack faces a crisis that may involve a traitor, Ethan must figure out what being the mate of an alpha wolf entails. He must also deal with pressure in his brain that grows steadily
worse and makes him fear he has Scarab Syndrome, which causes increased power and eventual madness in Psy. Having felt alone all his life, even after his rescue by the Arrows and his acceptance into the squad, he aches for a future with Selenka.

The problems for the DarkEdge pack show Ethan and Selenka adjusting to being a couple. She isn’t his alpha and can’t give him orders. Neither can she accept his grim view of himself as irretrievably damaged or the chance that Scarab Syndrome could rob them of the bond they’ve just found. Clues to Ethan’s eventual fate are sprinkled through the book but not in a way that makes the outcome obvious.

As is always the case when a system falls, someone sees the end of Silence as an opening. A Psy calling herself the Architect, a member of a group called the Consortium, is manipulating empaths with Scarab Syndrome to help her gain power.

Emotional scars, treason, and anger make this a dark book, but Singh offers light moments to break the tension. The symposium that opens the book, includes Valentin Nikolaev, alpha of the StoneWater bears, and some of his bears. Selenka and the wolves find the bears’ frivolity annoying, and she’s doubly irritated because three of the bears talked her wolves into an outing that ended in a bar brawl. Since I loved the bears, I was delighted to see them again.

Children abound in this story, offering gentle humor and a peek into Ethan’s heart. He’s very careful in dealing with children. The Arrows, emotionally stifled from childhood, have had lessons in dealing with children, and Ethan was paying attention. There’s also a dog that adopts Ethan early in the story and softens the edges of his emotional darkness.

Psy damaged by abuse of power or Silence are common in this series, but Singh manages to make each one unique. It’s a sad commentary on the ways people can wound each other, but it makes for engrossing storytelling.

Selenka and Ethan are three-dimensional people, and their supporting casts, the DarkEdge wolves and the Arrows are also multi-layered. Each character has enough depth to seem real, not just a plot device. The story moves well through its powerful emotional arc with, once again, a hero and heroine you have to love and root for.