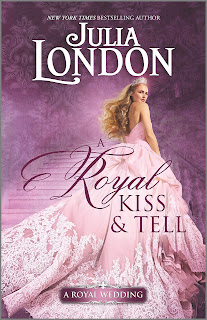 Every young man in London’s ton is vying for Lady Caroline Hawke’s hand—except one. Handsome roué Prince Leopold of Alucia can’t quite remember Caroline’s name, and the insult is not to be tolerated. So Caroline does what any clever, resourceful lady of means would do to make sure Leo never again forgets: sees that scandalous morsels about his reputation are printed in a ladies’ gossip gazette…all while secretly setting her cap for the rakish royal.Someone has been painting Leo as a blackguard, but who? Socially, it is ruining him. More important, it jeopardizes his investigation into a contemptible scheme that reaches the highest levels of British government. Leo needs Lady Caroline’s help to regain access to society. But this charming prince is about to discover that enlisting the deceptively sweet and sexy Lady Caroline might just cost him his heart, his soul and both their reputations…

This second book in London's A Royal Wedding series is an enemies to lovers tale featuring the English best friend of the heroine of book one and the younger brother of the Alucian hero, the Royal "Spare." I haven't read book one yet but I love a good enemies to lovers story and have enjoyed many of London's books over the years so I was already pre-disposed to like A Royal Kiss & Tell. But I had not yet met Caroline.

I really struggled with this character. She is not the type of person I'd want to be friends with and though I tried, I just was not able to form any type of connection with her until the final two chapters of the book. She is nicely redeemed in the final chapter but, for me, it was a bit late. Perhaps if she'd had more depth or shown something more than egotistical, shallow, and annoyingly obnoxious behavior for the vast majority of the book, I'd have felt differently and been more invested in her and her relationship with Leo.

Leo also is not very likable at the beginning of the book but his evolution begins earlier and continues throughout the story. I enjoyed his character and found his growth believable, especially as it is paired with a bit of intrigue involving slave trafficking of young women from his country to England. London does an admirable job of transitioning his character from a drunken wastrel to a responsible man willing to sacrifice his own reputation to rescue the young women from untenable situations.

Human trafficking was a serious topic to introduce into this story. I would have liked to have seen more accountability for the perpetrators and attention to the victims. There are still missing women being enslaved in England, rescued women who have been used as sexual playthings, and most of the high-ranking men involved seem to have not been held accountable for their heinous actions. I wonder if that is the author's statement on the unfairness of a female's vulnerability, and the male's power, during that time or if she has plans to continue this plot line in a future book?

London's a very good writer and there will be many who will love this book and probably feel very differently about Caroline than I did. It just didn't work for me but, sometimes, one reader's disappointment is another's pleasure. If you love Royals, fashion, gossip, biting banter, and a slow-burn, enemies to lovers romance, this might be a good book for you.